The eponymous hero of the film gets swept up in SoCal Asian American gang life from a young age, drawn to the brotherhood espoused by the local thugs which seems more nurturing than life with his neglectful father. His junior membership in the gang leads to a seven-year lock-up where, incidentally, he learns to take his criminality to new heights. After his release he quickly finds himself back in his old ways.

Props to lead actor David Huynh for bringing a touching vulnerability to the violence of Baby's life. But the exaggerated swagger of Asian American thug life wears thin at times, like a bad homage to Goodfellas. I heard "Biiitch" so many times, I wondered if Too Short received a co-writing credit. However, it's the quiet moments in between -- without the hyperkinetic beatdown scenes or obvious musical score that signals a dramatic moment is taking place -- where the characters and their struggles get to be natural and truly get to shine. It's where we understand Baby's moral conflict over his actions and where we get a great portrait of both the deep flaws and redeeming qualities that exist in us all. Baby doesn't allow for enough of these natural moments which would have balanced the film's gangster bluster and revealed more dynamic aspects of the story.

The Boyz n the Hood comparisons are a bit off the mark, in that there are few scenes of actual violence in John Singleton's film; the threat of violence (and the systemic problems that contribute to that violence) in South Central loomed over the characters whose struggle to get by or get out remained the focus of the film. It's an approach that I think could have helped Baby.

But the significance of this film cannot be ignored, despite my opinion on how it was executed. There is a paucity of Asian American films showcasing the diverse layers of Asian American life whether good, bad, ugly, or in this case, violent. The issue of Asian American gang violence is oft-ignored despite its very real presence in cities across the US. Audiences need to see Asian Americans in different cinematic capacities. If it's via a vicious beatdown, then so be it. 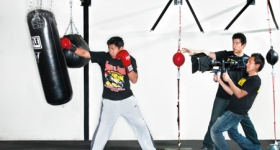