The Voice site has no contestant group pics, so feast your eyes on the coaches

Man oh man did The Voice pick up on the Asian American contestants with not one, not two, but three mixed-race Asian ladies added to the ranks. Julia Eason is an 18-year-old soccer player from Palos Verdes, CA and is of Scottish, Korean, and Japanese descent. Both Christina ("You moved me") and Cee Lo ("... a balance of something smooth and assertive") turned around during her performance of "Mercy," and she ended up going with Ms. Aguilera. Is it dumb to say I love Julia's hair? Don't care; love it.

Dia Frampton is a Korean and Dutch 23-year-old from St. George, UT. She writes children's novels, which sort of makes sense because she has four little sisters (aww). Blake turned around almost immediately when she sang "Bubbly" ("You made me smile"), and Cee Lo got in on the Dia action late ("You look just like that song: all warm and cozy and cuddly"). She went with Blake, possibly because Cee Lo's comments were a tad creepy. We didn't get to see much of Sara Oromchi's audition, but the 18-year-old, Japanese and Persian, "bashful" singer sang "Imagine" and made it onto Blake's team. Two possibly country girls! It'll be interesting to see what happens, especially since I still barely understand the show's structure. Okay, and Sara has great bangs. These ladies have excellent hair.

It should also be noted that poor Sonia Rao, whom we saw try out and get rejected last week, got a second change at auditioning and was turned down again. "It hurts as much the second time." That was MEAN, dudes.

Lots of contestants to be updated on America's Best Dance Crew as well. All three of our remaining Asian-member'd crews were voted into safety this week, so we got to just sit back and enjoy the show with no threat of elimination. Instant Noodles had to do a "head top" for the Rihanna challenge, which is a sort of headstand with poses. They busted out some leopard print leggings and got mixed reviews from the judges: Lil' Mama wants them to study up on their reggae, D-trix said it was their best performance yet (and gave them props for the ridiculous pants), and JC pointed out some sloppy footwork. IaMmE had to do the "Spiderman," a sort of swinging body rocking that I guess is supposed to emulate the webbed wonder (can you tell how little I know about both dancehall and comics?). They went all-out with the Spiderman theme, having one of their members act as Spidergirl while everyone else acted out a human web (in ... french fry jackets, I think). JC likes "everything about this group," Lil' Mama said they're "the perfect combination of doing what [they] do and opening up to the challenges," and D-trix said that they were "absolutely brilliant." I'm thinking that IaMmE might be emerging as my favorite this season; how about you guys? Street Kingdom had to work in some "dutty wine," which is basically sexy hips -- a bit of a departure for the hard krumpin' group. They moved Lil' Mama to proud tears, who commended the way they "represent the streets and represent people who don't have a chance," but she encouraged them to open up and let the audience in more. D-trix liked the storytelling and wanted them to work on group dynamics, and JC found some of their moves a bit elementary. JC, you're up for some tears at Street Kingdom's performance next week... Second place for nest pants of the night.

And the rest of our shows! On the RuPaul's Drag Race reunion show, Manila mentioned the negative feedback she got for her portrayal of a FOBbie news reporter. The criticism always came from people who aren't Asian, she claimed. Guess she doesn't read my column, sniff. Though I will repeat once again that I didn't find the bit racist so much as lazy and uncreative. Sorry, girl.

Author Francis Fukuyama stopped by the Colbert Report to promote his new book The Origins of Political Order and discuss the Middle East. When asked where he was when he heard about Osama bin Laden, Fukuyama said, "I was in my hotel room and I said, 'God damn.'" Nice one, sir. He also managed to get a bit of China fear mongering in at the end of the interview; check out the whole thing here.

A one-liner from part one of Community's paintball season finale: trapped behind a table with Jeff, Chang called out to their attackers: "Math Club! I'm Asian! Are you Asian?" "That's racist, man," one of the club members responded before the reveal of three Asian men. Chang went on to double-cross them and several other groups he claimed loyalty to over the course of the episode. Interesting challenges on Top Chef Masters this week. For the Quickfire, the chefs could only use up to a dollar's worth of ingredients. This was not intimidating for Floyd, who came to the States with $100 in his pocket and had to learn how to stretch every dollar. He didn't wow the judges with his dish, but Celina impressed with her carrot soup, which brought her second place. However, she found herself in the bottom of the elimination challenge, which had the chefs staff and cook for a fast food restaurant/drive-thru. Her wrap was more of a pancake with stuff on it, but Floyd delivered an ideal wrap with his chicken "Frankie" and landed in the top. Ups and downs this week, guys! Just glad you both made it through. Floyd's got his food costs down to the penny. 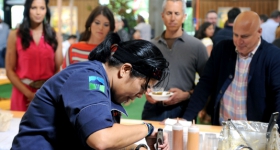 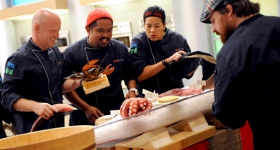