It's January, but San Francisco’s winter chill can’t be felt in the steamy confines of El Nino Training Center. Echoing within the walls of this Bayview-Hunters Point gym — which is owned and operated by Strikeforce Mixed Martial Arts (MMA) fighter Gilbert Melendez — are the sounds of grunting, limbs slapping upon mats and the whirring of James Z. Feng’s video camera focused on a dozen fighters preparing to compete. Some of these young men and women have relocated to the San Francisco Bay Area just to undergo training in MMA, a full-contact combat sport incorporating martial arts styles such as boxing, wrestling and judo.

Feng’s crew is nearly done filming the independently produced documentary Fight Life. The film’s tagline -- “All pain. No glory.” -- sums up both the behind-the-scenes rigor of MMA, one of the nation’s fastest-growing sports, and the crew’s own experiences as indie filmmakers seeking resourceful ways to stretch a chronically limited budget.

The first MMA matches in 1993, subsumed by the promotional company Ultimate Fighting Championship, were violent and gimmicky spin-offs of Brazilian jujitsu. Since then, fighting styles have been streamlined and guidelines implemented. As the sport has gained legitimacy, a profitable industry has formed around the octagonal fighting ring.

Feng wanted to spotlight fighters’ personal stories and dispel misconceptions about MMA. In previous films about MMA, according to Feng, “negativity has really been the focal point” such that the sport is portrayed as too violent or likened to “human cockfighting.” In contrast, Feng says, “my goal is to show that [MMA] is a real sport” by presenting stories that reveal MMA fighters as “people you can relate to.” Fight Life strips away MMA’s idealized facade, which is an artifact of big-money endorsement deals, and springboards to Hollywood roles for fighters such as Quinton “Rampage” Jackson’s turn in the film adaptation of The A-Team (2010). Instead, the film looks at the hardships of training, life on the road, the modest prize money earned by newer fighters, tolls taken on personal relationships and health risks faced by uninsured competitors.

This was a preview of The New Legacy Issue. To read the full story, subscribe to Hyphen or pick up a copy at a newsstand near you.
Magazine Section:
Film
Magazine Issue:
Issue 21: New Legacy - Fall 2010
Categories:
Film
Contributor: 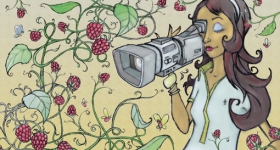 Anonymous wrote on Mon, 10/18/2010 - 2:08pm
"The first MMA matches in 1993, subsumed by the promotional company Ultimate Fighting Championship, were violent and gimmicky spin-offs of Brazilian jujitsu" Sylvie, please do your research prior to making rash statements. There was nothing gimmicky about the original UFC. The strikes a la punches, kicks, elbow, knees, headbutts, and what have you...they were all real. The first organized MMA matches were perhaps in Brazil, called "Vale Tudo," translated into "anything goes" in Portugese. Ironically, you attempt to debunk the negative notions outsiders have of MMA, but instead exacerbate them.
Sylvie Kim wrote on Tue, 10/19/2010 - 9:59am

The historical reference to UFC was paraphrased from this Time magazine article: http://www.time.com/time/magazine/article/0,9171,1106294,00.html.

The debunking of negative notions does not focus on any MMA organization, but rather on the personal lives of the fighters.

Le Sheng Liu wrote on Mon, 11/15/2010 - 11:32am
I look forward to checking this out.  The interesting thing is that the commercial success of UFC has opened opportunities for portrayals of strong, talented Asian men.  And because MMA is exactly that (a mix of various fighting techniques, not only the ones that come from Asia) and UFC fighters come from all over the world, we see Asian men being represented but not reduced to a stereotype.
Sylvie Kim wrote on Mon, 11/15/2010 - 11:38am

As an independently produced film, the release date is still up in the air but we will be sure to update the article when we hear from the producers.

Selena Murphy wrote on Fri, 10/26/2012 - 12:04am
I'm a big fan of MMA, Boxing and Wrestling. I've been into lots of live fights in these categories. This December it would be more interesting to watch the marquez vs pacquiao 4 and I've already reserved a ticket for this. I sensed something great in your video and photography project.
Owen E. Pugh wrote on Tue, 11/20/2012 - 10:49pm
This could be more interesting movie in relation to marquez vs pacquiao bout this December and I'm hoping this would turn to be a good fight. Now I just learned something new that is in relation to boxing and martial arts.
Pacquiao vs Marquez wrote on Wed, 11/28/2012 - 11:51am
So excited for this upcoming fight between Juan Manuel Marquez and Manny Pacquiao. Vegas will go crazy!! If you can't watch Pacquiao vs Marquez online there are some online sites that could help.