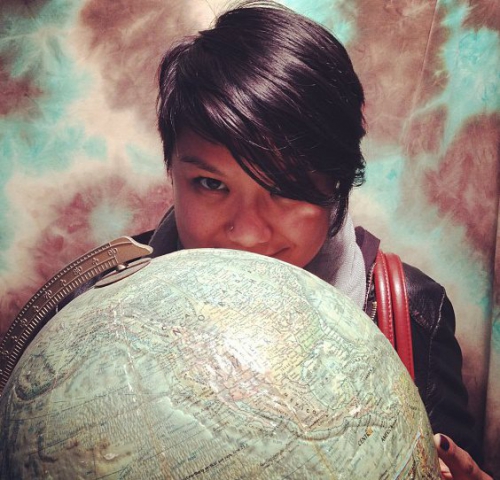 Michelle Peñaloza grew up in Nashville, Tennessee and earned her M.F.A. from the University of Oregon. Her poetry has appeared most recently in TriQuarterly, The Weekly Rumpus, and INCH. She is the recipient of the Miriam McFall Starlin Poetry Award, fellowships from Kundiman, the Richard Hugo House, and Oregon Literary Arts, as well as scholarships from VONA (Voices of Our Nations Arts Foundation), the Bread Loaf Writers' Conference, Vermont Studio Center, and the Napa Valley Writers' Conference. She lives in Seattle where she is hard at work on her current project, landscape / heartbreak.

DAGURREOTYPE
!
!
A child waits upon the sea.
He cannot explain how the water became
an endless field of bamboo,
banana leaves, rolling wild grass and fern.
Only that one night the moon was bright
enough to break his sleep.
Beneath that light, his mother became an ibis;
his father and brother, two tiger shrikes.
Sister, a laughing thrush.
They flew into the moonlight, the sea-reefs’
branches of water,
the unceasing waves of leaves.
!
Oarless and alone, the boy
learned the leaves
could power his boat with song.
They sang of creatures of the swamp, of killing
fields and hills of poisoned trees.
!
The leaves carried the boy to sanctuary,
where he kept their songs and taught himself to sing.
He sang to ibis, shrike, and thrush,
songs of children who could grow wings, songs
that could conjure galaxies
within the bowls of lotus leaves, become
butterflies in his mouth. He sang to
the infinity he found: billowing grass,
fronds of ferns, the quicksilver of the moon.This