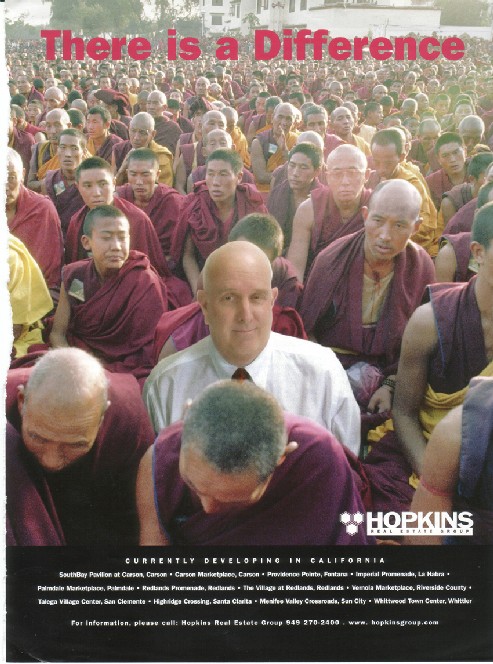 Oh my gosh I am sick of talking about stereotypes and issues of representation. We "ethnic media" people are sometimes viewed as whiny and unrelenting and one-track minded, and it's kind of true. Here I am, complaining again about the way my peeps are being represented. But we can't stop, because society at large has clearly not gotten the message. Look at this image! Just look at it! What do you think they were thinking when they came up with this?!! I can see a person saying, "The concept of this is: 'one of these things is not like the other' (a la Sesame street). It's really not about skin color, it's about being different. Like, there's three cheeses and a baseball! One is different! Neutral! and I say to that argument: bull hockey!!!@#$%@! First of all, they never would have done that with say, downtrodden black people. I'm sorry to keep bringing up that analogy, but it's true. Obviously they're very insensitive, so they probably wouldn't refrain from some internal moral compass, but because they're afraid of pissing off the scary black people. Well, what about the scary Asians? Clearly we're not making enough noise, people. And I mean scary noise. Because until people get educated enough to know that this is offensive, they need to at least be aware that right or wrong, some people are going to be pissed and there will be consequences when you step across a line. Maybe we need to instill in people is hypersensitivity to Asian representation, so that people will at least think twice before saying, "Hey Chad! Here's a great idea! Have a pudgy smug-ass white dude in the midst of some miserable-looking oriental monks! He'll really stick out and illustrate our concept of "difference!" Because of course it's not that simple. I'll spell it out: depicting a rich, clean white guy in the midst of (praying? meditating? demonstrating?) Buddhist monks is reinforcing negative images of dirty, uncivilized Asians. Selling that white man as superior to his surroundings compounds that. And when it's as horrifying as this image, guess what! It's racism! (Or am I getting this all wrong? Is perhaps the ad really pro-Asian, and we're celebrating how the Asians are "different" from Smug-Ass? There IS a difference between people who've taken vows of poverty, have suffered persecution and exile (they look like Tibetan monks, perhaps) and are devoting their lives to spiritual enlightenment vs. a bald, old, white guy dedicated to profits, urban sprawl, smug superiority, creating 10x as much garbage and using up all the oil in the world. Oh yes, there is a difference.) This ad was created by the Hopkins Group, a real estate development company. Check them out at hopkinsgroup.com. They operate in California and Nevada, places where there are lots of Asians who can stop renting space in their strip mall or stop visiting stores there, or where Asians can stop doing business with them. Until they learn, the best way is always to speak to their bottom line. Or you can contact them at Hopkins Real Estate Group 17461 Derian Avenue Suite 106 Irvine, CA 92614 Phone: (949) 270-2400 Fax: (949) 644-8631 www.hopkinsgroup.com And let them know how you feel about their ad. Many thanks to Hyphen staffer Benjamin Ng, for sharing this image with us.