Where Were All the South Asian Films at the SFIAAFF?

Each film, program and event I attended was thought-provoking, inspiring and downright fun. (Here’s to Han Vodka for the bottomless pineapple-infused vodka martini’s they unraveled my night with at the Closing Party.)

Yet, from the launch party, as I sat too close to a speaker at 111 Minna and excitedly perused the catalog, I have been troubled by something: the lack of (good) South Asian programming.

Of course, as a South Asian American who locates herself as much in Asian America as I do inside my own ethnically-specific community, this feeling of being marginalized is not a new one. I know that it is a challenge to balance the communities in a pan-ethnic concept like Asian America. Chinese and Japanese Americans have a longer history here, a very different history, which allows them to have infiltrated media in a much different way. Take Authur Dong’s feature-length documentary Hollywood Chinese, for instance. It would be impossible to make such a film about South Asian Americans because we have just begun to make an impact in this realm.

But still the festival seemed lacking to me. The South Asian features were limited to the Bollywood remake of Umrao Jaan staring the ubiquitous Aishwarya Rai, Paul Mayeda Berges’ The Mistress of Spices (also starring Rai) and A Dream in Doubt, a documentary about the brother of Balbir Singh Sodhi – the first hate-crime murder victim after 9.11.

Okay, I know that a major Bollywood movie is always screened at the Castro in order for the over-the-top, melodramatic, Technicolor experience to be enjoyed in full Art Deco glory but I just don’t know if it is the best use of the festival’s time and space. I think this remake of the 1981 Umrao Jaan starring the unbeatable Rekha, which is about the woes of a lovely courtesan who falls in love with a nobleman -- kindof like Pretty Woman if Richard Gere’s father had told him he would disown him if he took Julia Roberts’ home –- is terrible. It loses all the heartbreak, elegance and substance of the original and leaves only the period costumes and Rai’s two tearful expressions – tearful joy and tearful anguish. Plus, it was a huge Bollywood hit that has already run at Bay Area Bollywood theaters like the Naz 8 and is widely available at video stores. Why not go for a slightly more obscure yet interesting Bollywood-esque movie like Dor? Featuring Amrao Jaan seemed like slightly lazy programming to me.

And Mistress of Spices. Sigh. I have a personal relationship to this film because my aunt is the author of the novel it was based on and I went to the set in Oakland where the filmmakers were shooting all the Bay Area location shots, where I got to meet Rai and Dylan McDermott (random). I loved this novel when it came out. I thought it was a really interesting mix of magical realism and immigrant stories. And I know director Paul Mayeda Berges used to run the San Francisco Asian American Film Festival. And it is a South Asian American feature. I actually saw in on Singapore Airlines on my way back from a trip to India in January. Anyway, I’m not going to say too much: but I think this film was unsuccessful. I think it is very difficult to bring magic to the screen in a way that doesn’t make one roll their eyes, and it just didn’t work for me.

I’m sure Tami Yeager’s A Dream in Doubt was a powerful documentary. But I wasn’t that interested in seeing it, perhaps because I had recently seen Sharat Raju and Valarie Kuar’s Divided We Fall: Americans in the Aftermath, which is also about the Singh Sodhi family, and also about the plight of Sikh Americans after 9.11.

So there it is, the largest International Asian American film festival of it’s kind and no South Asian feature that I *really* wanted to watch. I was bummed. I started thinking a lot about the state of South Asian film and the problem of not having a number of dedicated South Asian programmers at a festival like SFIAAFF.

We all know that there is a huge film industry in India. Bollywood churns out over 1000 films a year, but most of them suck ass. They are known to copy Western films, feature terrible acting and be filled with song-and-dance. (Check out a really interesting discussion over at Sepia Mutiny around Bollywood films and the Oscars from back in January.) But a lot of mainstream Hollywood movies suck ass, too. Just like in American film, if you step a little bit outside the mainstream, you’ll find some of the most incredible movies being made today.

Following in the footsteps of auteur Satyajit Ray, movies coming out of West Bengal – or Kolkata – are truly incredible. These are quieter movies about urban life and radical politics. I’ve heard there are similar small but mind-blowing movies coming out of Kerala, another of India’s communist states. Why are these films not being screened at SFIAAF? Bengali filmmaker Buddhadev Dasgupta often has films in the San Francisco International Film Festival, why not in the Asian?

Granted, I know nothing about the process for acquiring films but I think that these films would be more thought-provoking and interesting than mainstream South Asian films and showing them would provide more of a service because you can’t get them at the local Indian video store as easily. I urge the programmers of SFIAAFF to try and get a little deeper into South Asian film in order to bring us a richer program. 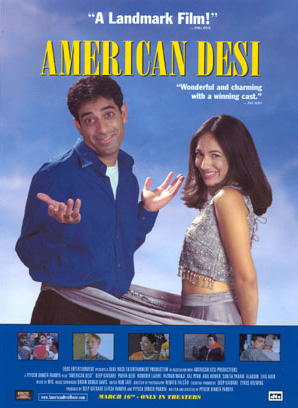 As for South Asian American film, I’m not sure what’s going on. After the initial wave of South Asian American filmmakers who made a series of identity-crisis films (American Desi, American Chai, ABCD), I am still waiting for the next strong wave. Last year’s Punching at the Sun was a powerful and moving film that captured a different part of our community and I loved it. I was expecting to come back a year later and go to the next level, but was left empty. The empty feeling was especially painful when the festival was full of other (if not great) interesting Asian American films from directors like Justin Lin to Eric Byler and even lesser-known directors -- like Korean American So Yong Kim, who made In Between Days, which was one of the best teen angst films I have ever seen in my life.

But I know there are South Asian filmmakers out there because where they were making their mark at this festival was in the shorts programs. The Third I Shorts program – which always seems to be one of the first things sold out, which shows the South Asian community’s interest – was great. I was really impressed by Vineet Dewan’s Clear Cut, Simple, which deals with the War in Iraq and was exactly the kind of diversity in story that I have been searching for in South Asian film. And to prove my point about Bengali film, my other favorite short was The Naming Ceremony by Konkona Sen, who is the daughter of Aparna Sen Sharma – one of the most celebrated filmmakers coming out of India today. This film, about a family of pickpockets, was really interesting. I know that Ivan Jaigirdar of Third I does a lot of great programming for SFIAAFF and for the Third I festival, but I think it can’t just be one person who is doing all the work.

But even outside of the Third I shorts, there were filmmakers making interesting work like San Francisco filmmaker M.R. Dhar’s Muzak, which opens with an Indian mom scolding her son for failing out of Georgetown and running up hundreds of dollars for phone sex on her credit card, while he only wants to be a techno DJ. This quirky film is exactly what I’ve been searching for: stories about real South Asian Americans dealing with life, failure, family and more.

Anyway, I am hoping that in the following years both the SFIAAFF’s programmers and South Asian American filmmakers get their acts together. Because I’m one hungry audience member who wants more of my people on the big screen.

Anyway, the Third I Shorts Program is playing again Sunday March 25th in San Jose. Go check it out and tell me what you thought about the South Asian representation in the festival.