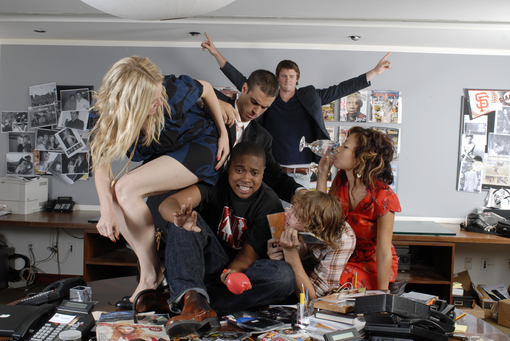 I saw every episode because one of my closest friends was on it and it was a reality show about being a journalist.

I guess MTV figured out quick that people would much rather watch The Real World kids get drunk and screw than seeing the daily inner workings of a major music magazine, because the show got moved to Sunday at 11 p.m. and sometimes wasn’t even on at all. Truth be told, as most of you who work in journalism know, the job usually involves a lot of sitting around in front of your computers and talking on the phone. I think having a reality show about Hyphen would be more interesting because we're starting up and not as corporate. What do you think? Should I pitch it to these guys? It will probably have to involve some sort of competition.

Anyway, the final episode was last night and Krishtine De Leon, a Filipina American from the Bay Area, won the job as a contributing editor.

Krish, as she is known, has been much maligned and sometimes talks back. She definitely became that cast member that you love to hate. But I have to say, knowing that a Filipina American woman who specializes in hip hop reporting is working at Rolling Stone, which my friend said was pretty much all white people, is pretty cool. (I mean, Russell should have won but he was a little too Hunter Thompson for them.)

Not only is Krish a serious journalist, but sometimes when I’m bored at work I listen to some of the songs from her band: The Rhapsodistas. “Married to the Hustle” is almost as catchy as Tila Tequila’s Fuck Ya Man, but not quite.