According to the San Jose Mercury News (full disclosure, I work for the company that owns the Merc), Chinese Americans have mixed emotions, while the San Francisco Chronicle says the Olympics bring pride to Chinese Americans. The Detroit Free Press reports the expatriates say the games mark a turning point for China.

Those are just a few of the stories that will be published this week. I sort of wince at reaction stories like these because they tend to pigeon hole people.
For newer Chinese immigrants, the ties to the old country may be closer and they may have some strong opinions about what's going on in China. Someone like me, who was born in the United States, may not necessarily have as much a connection. Certainly there be some sense of ethnic pride, but my opinions may not be that different from non-Chinese Americans.
However, the Olympics in China will be a big deal and the whole world will be watching. Whether you're Chinese or just look you might be Chinese, people are bound to ask something like, "how do you feel about the Olympics being in China."
If China cracks down on protesters or does something stupid like that, Chinese Americans will be asked for their reaction and maybe even have to deal with some backlash. Let's hope that doesn't happen and the games go off without a hitch.
For me, there will be a number of Asian American athletes participating in the games and that's something I'll probably keep an eye on. And being an old high-school hurdler, I'll be watching Liu Xiang, the defending Olympic champion and former world-record holder in the 110-meter high hurdles.
If you're Chinese American or even if you're not, what's your reaction to the scrutiny the games?
Categories:
Media
News and Politics
Sports
Contributor: 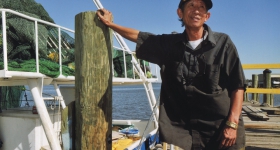 Ah Mow wrote on Wed, 08/20/2008 - 10:16am
In my view, the Western media these days have an agenda of their own besides reporting world news.The latest barrage of China bashing, starting with toxic exports, to the human rights violations and Tibetan suppression and faulting finding in the Beijing Olympics are all geared to divert attention to China as the bad guy. The American public being naive as usual of-course, took it in hook-line-and sinker. In this election time, they have completely forgotten the tragic mistakes of the Iraq war and the mortgage crisis and those responsible for both disasters. And they are apparently succeeding according to the " polls " which also have became propaganda machines. Who are the media working for ?You tell me.
momo wrote on Tue, 08/05/2008 - 10:32pm
Speaking of Asian Americans Olympians, don't forget badminton star Howard Bach, who we featured in Hyphen issue #9 (Play).
Asiana wrote on Fri, 08/08/2008 - 9:58am
When I was listening to Air America yesterday, Ron Cuby raised an interesting question: Is the Olympics the appropriate environment in which to raise international unrest or should it be purely about athletic prowess and comradery? He went on to site President Bush's speech on China's offenses against human rights (and of course good ol' Ron shot that down as hypocrisy. But he also mentioned that China banned athlete Joey Cheek from entering the country due to his activism for Darfur.http://blog.seattletimes.nwsource.com/olympics/2008/08/athleteactivist_joey_cheek_ban.htmlI'm not sure if there will be backlash on how China deals with protesters during the games but there has already been actions on China's behalf that are raising eyebrows of other nations.Personally, I always loved the Olympics. I remember growing up and watching the opening ceremony with a sense of awe. I mean it's the one time that those who inhabit planet Earth can feel somewhat connected over the pure strength and endurance of the human body and that feeling transcends ethnicity and country. Plus what person never secretly wanted to win an Olympic gold medal. Too bad eating the most spam musubis hasn't made it to the Olympic arena yet.
Karen wrote on Fri, 08/08/2008 - 10:08pm
As an American born Chinese the scrutiny of the Olympic games and China appear to be a double standard. While the country has crimes of its past that still need to be addressed as well as current political issues, they are no different from other industrialized countries (United States, France, Russia are a few that come to mind) who have a history and a current record of policies that many disagree with. French protesters were quite vocal in their views and yet no one pointed out France's policies towards immigrants or it's colonial history in Africa. The double standard is that China is a fast rising Asian country - and the way I see it, similar to being a Chinese American student, there is an expectation from peers to do well, to be judged by the degree of progress, to be analyzed for chosen methods, to be told to not stand out too much, and to be held at a higher moral standard. Should any of those be seen as flawed then critics come out to point out the errors and demand reforms. "Model Minority" equivalent to "Model Industrial Country"? Regarding human rights, China does need to change it's policies. But Pres. Bush's speech had no merit considering US policies in Guantanemo.