Random News From Around The Way

Here's a quick recap of some of the headlines and happenings from the blogosphere and around the way that hopefully won't put you to sleep -- although I can't really promise anything, so if you do end up falling asleep, just remember that technically I never said this would actually be interesting -- just informative.

Is it just me or are Asian American media outlets starting to drop like flies? I know that in Jeff Yang's article on iaTV they say they'll be around for a while, but with an 80% staff cut it doesn't really bolster confidence -- although maybe that just means more subscribers for Hyphen.

If you haven't heard -- or just don't follow golf -- Asian American Anthony Kim, even though a Ryder Cup neophyte, set the tone for the U.S. team in individual play with wins over Sergio Garcia last weekend to help the U.S. take back the Cup from the European team who had won the previous three outings since 2002.

Roses Have Thorns and Austin Gets Film

Cinemasia, who put on my favorite short film down at the 72 Hour Film Festival, is having a showing down in the East Village this Thursday for their new feature "Roses Have Thorns" as part of the New York International Independent Film and Video Festival, so check it out if you get a chance.

In other film related news, the Austin Asian American Film Festival is getting ready to come your way in a few weeks, running from October 9th through the 12th, and from the lineup and trailer looks like it should be pretty good. To check out the films and reserve tickets go the AAAFF site.

For some odd reason this just happened to catch my eye because I wondered what Sherman Alexie was doing in a Dan Savage article because they really don't go together. Sherman Alexie: award winning author, person or color, American Indian activist. Dan Savage: Dan Savage.

Is the Philippines Full Of Uncle Toms?

Caught this post via Rice Daddies about going to the Philippines, having dark skin, whitening products with mercury, and the quote "This is going to seem harsh, but it needs to be said: the Philippines will continue to be a filthy, backwards third world country with little to take pride in unless our people stop being ashamed of what we are: BROWN."

Cho versus Palin versus Shakesville

From busting a nut in the curl to eating out Eskimo style, this conversation about Palin is getting some heat and I'm just hoping there's more coming -- soon.

Word To My Wal-Mart

Best quote from this Notes and Queeries post by Malinda Lo: "A happy lesbian wedding on display at Wal-Mart? 'I wish them the best,' my mother said to me, as if I could somehow relay her congratulations to the newlyweds."

That's A Lot Of Joy

Asia Pacific Arts did a recent experiment where they put four women together who had never seen "The Joy Luck Club" and then did a discussion with them to ponder its relevance years later.  While I think that's interesting, couldn't they have included some guys? Do we just not matter?

And You Got a Year (And a Day)

When you launder $125,000 of grant money -- for whatever reason -- a year and a day actually doesn't seem that bad of a sentence, and I'm sure someone will have a nice warm bowl of soup for Julie Lee when she steps out of the pokey. 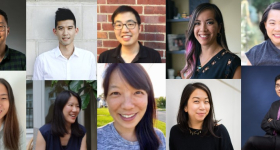 More Than "Escalating Tensions": A Roundtable on Taiwan's Recent Representation in Western Media

Asiana wrote on Wed, 09/24/2008 - 4:43pm
There were two stories that caught my eye.I love Sherman Alexie and love, love, love reading Savage Love so the fact that the two are friends was interesting. The question that Dan answered was a little disturbing considering the only role playing fantasies I have involve librarians and a man who has an overdue book...Also, the skin brightening story was also interesting because I actually remember family members of mine (I'm of Filipino descent)having and using skin whitening products. I've always thought that these products were odd and later I learned that many other cultures are into skin bleaching and I read stories about women who suffered permanent skin damage from using such products. I do resent that comment from that dude. First of all, that guy is an asshole since as I mentioned before many brown cultures value lighter skin so calling Filipinos names is ignorant. I believe skin bleaching starts from an infatuation with the Western world which is why countries like the Philippines only have fair skin Filipinos on TV. I also believe that fair skin is a symbol of wealth. For example a tan person is tan because he/she has to work outside all day to make ends meets while a fair person just sits insides, shielded from the sun and has servants. Then let's not forget the folkloric idea of white symbolizing purity and chastity. There's obvious reasons why Filipinos and other brown peeps whiten their skin and it's not because they're backwards. I wonder if this person would chastise those haoles who are tanorexic. It's weird how white people in Hollywood like to be super orangy tan while brown and black people (like Jessica Alba and Beyonce) go to great lengths to appear lighter.Anyhoo, thanks for the news round up!
Hyphenator wrote on Wed, 09/24/2008 - 7:33am
iaTV's current financial problems have nothing at all to do with the current financial market crisis, as the company has done nothing but bleed money since its inception 4+ years ago.Pan-Asian play in the U.S. media space is a fantasy, as MTVK/MTVchi and AZN have amply shown.