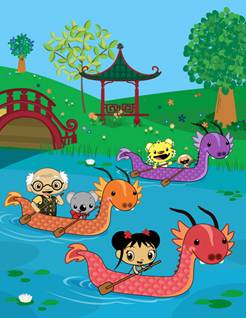 So I recently learned that Nickelodeon is premiering a new animated series called "Ni Hao, Kai-lan," to air beginning Feb. 7, 2008. Feb. 7 is the beginning of the new lunar year, the year of the Rat. The show targets preschoolers, kids 2-5, and sounds like it will be bilingual, in English and Mandarin. The press release makes it sound like the purpose of the show is to teach little kids how to speak Mandarin.

"Ni Hao, Kai-lan stars Kai-lan Chow, a playful, adventurous bi-lingual preschooler with a big heart, who speaks both English and Mandarin. Kai-lan’s world is infused with Chinese culture, from the dumplings she eats and the lanterns that adorn her house to the huge Chinese New Year celebration she has with her family and friends. The series centers on Kai-lan and her relationships with her grandfather Yeye and her animal friends. Yeye plays a major role in her life as he gently and playfully guides her to her own discoveries."

Also, I should note that the press release said they're launching the show to coincide with Chinese New Year even though we know it's a new year celebrated not just by Chinese people. And as a Chinese American, I always cringe when people say that. I mean, yes, it is Chinese New Year but it's also Vietnamese New Year, and other peoples' new year, so why not just call it Lunar New Year.

Personally, I am kinda-sorta excited about this new show, but with mixed feelings. Seems like in the past several years, learning Mandarin is the next big thing that parents -- mostly wealthy, white parents -- are trying to get their kids to learn. And now starting at the age of two!

When I was a substitute teacher, I remember subbing for Mandarin classes at a public high school in a very wealthy, mostly-white city in the Bay Area. I was surprised that the school offered Mandarin classes -- I think it went up to level 4, even. The kids in the level 3 class knew how to read and write Chinese a lot better than me. Hey, I never said I was qualified to teach the class, just sub.

But I will say that there was and probably still is a huge demand for Chinese-language teachers.

Hence the reason I subbed for that class, because even though my Mandarin is so-so, I was probably one of the only subs who knew some. I also remember being offered an English teaching position at a new charter school in Oakland back in 2002. The principal also asked me if I could teach a Mandarin class, even though I am totally not qualified. Also, I know there used to be (maybe still is) a demand for Chinese tutors for kids who are enrolled in, say, Mandarin classes at their school.

Anyway, aside from the Mandarin-language fetish that seems to be rampant these days, the cool part, for me, is that there's going to be a kids' show with an Asian American family as the lead, and a little Chinese American girl, to boot.

The part about hanging out with her grandpops, Yeye, is pretty cool. Maybe because I identify with that, having my Yeye (paternal grandfather) and Nainai (paternal grandmother) so close in my life in my early years.

Also, on a personal note, I have been trying to speak Mandarin to Baby T (he's 10 months old and really starting to pick up words). It is difficult. If anything, he's going to learn Chinglish from me. He hears way more English than Mandarin, unless my parents are visiting or if we're visiting them. So this show may be good for him later when I realize I failed to raise him bilingual.

Also, I have to admit, I haven't watched kids' TV in a while. I've never seen an episode of Blues' Clues or Dora the Explora or Spongebob Squarepants (ok, I have seen an episode of Spongebob). But I don't know, I find it weird that all of Kai-lan's friends are animals like a panda and a koala. Do most kids shows' protagonists have animals for friends -- or other kids for friends?

The other thing is, we don't watch TV anymore. We don't have cable, either. But if the show is still around in, say 1-2 years, then we might try to catch a few episodes.

And I just hope they don't ruin it by being really weird or using stereotypes.

Anonymous wrote on Wed, 02/20/2008 - 1:12pm
Thanks for the lesson on the lunar new year.I think you are missing the point of the show. I do not thik the goal is to teach 'white' kids to learn Mandarin, but rather for the children of Chinese americans to have a ways for their kids to be exposed to their culture. I am hispanic and I let my kids watch Dora so they pick a bit of spanish here and there and they love Kailan as well.
momo wrote on Sat, 02/23/2008 - 10:12pm
i do admit i am a bit of a skeptic/cynic when it comes to mainstream media and Asian Americans and probably have not given this show a fair chance. i don't think the target audience is just Chinese American kids, though.
claire wrote on Mon, 01/21/2008 - 12:27am
momo, just a note: the lunisolar calendar which determines chinese new year originated in china, so calling it chinese new year--although it is shared by koreans, japanese, and vietnamese--is correct in a particular way.also, because of the time difference between the capital cities, where the date is determined, occasionally tet will fall on a different day than chinese new year.the tibetan new year is early in our year, but on a different date from chinese new year, and the thai, lao, and cambodian new years are different calendars as well. and that's not to mention the umpteen different calendars, and new years, from south and central asian cultures.many of these are lunar calendars too ... so calling chinese/japanese/korean/vietnamese new year "lunar new year", as if that were the only lunar new year, is presumptuous as well.i hear what you're saying about it, but i'm not entirely sure it isn't necessary to distinguish east asian lunar new year more specifically.
kerbot2000 wrote on Mon, 01/21/2008 - 10:58am
"Typically, television portrays excitement as the good emotion to feel. In many Chinese-American communities, the good thing to feel is often calmness and contentment. Feeling excited and feeling calm can both be happy feelings, but they differ in how aroused the body is."i'm all about teaching the kids about body arousal.
momo wrote on Mon, 01/21/2008 - 2:53pm
hey Claire, good points you make there. in this case, since the show is about a Chinese American family, i guess it makes sense to call it Chinese New Year given the context, but it's also good to acknowledge that other groups celebrate a new year based on the lunar calendar at the same time.Kerbot2000, that is hilarious wording. i didn't catch that.
rebecca wrote on Mon, 01/21/2008 - 6:06pm
i know two non-asian american toddlers who have done mandarin school. both of their families have a linguist parent (they don't know each other), and they wholeheartedly espouse the idea of early language education. more than it being a "mandarin fetish," i think the families just recognize that there is more out there culturally than that which is english-dominated, or even romance-dominated. better than baby pimsleur french, right? and why not start out with a hard language?for so long, the language to learn in california was spanish, in recognition of the large spanish-speaking population. i think it's great that people see asian languages as a good alternative, and it also implies that people are beginning to recognize the force of asian immigration as well.
giles wrote on Tue, 01/22/2008 - 10:29am
i think there's precedent to having a child's best friends be animals in cartoons. dora's best friend is a monkey. a koala seems like a weird choice tho?
momo wrote on Tue, 01/22/2008 - 1:55pm
Giles - yeah, i need to get used to this whole new world of children's tv, huh.
snub wrote on Thu, 01/24/2008 - 4:12pm
a Chinese girl's best friends will be songbirds, kitties & ducks
momo wrote on Fri, 02/08/2008 - 10:32am
here's a review of Ni Hao, Kai-Lan on SFGate.com - it sounds like a nice show based on the review. did anyone happen to catch it?