Submission Instructions: Please send Headshot and Resume to
bettyj [at] sfu.ca. The director will then send a piece of text for you and
arrange an audition appointment with you. Please state which character
you choose to play. If chosen, it will be expected of you to engage in
rehearsals with the director and other actors prior to the actual film
shoot. Rehearsal times will occur in August. Time and place yet to be
decided.

(Supporting)   Homeless Man
Gender:  Male
Age:  60
-Homeless
Man, age 60, caucasian, from the Downtown Eastside of Vancouver. -Wears
a tired set of blue eyes; bald with a beard (make-up department) -very
humble -Scene Line of Action: A poor man gets his meal; and a Chinese
prostitute reconciles with the disillusionment of identifying herself
as a White woman. 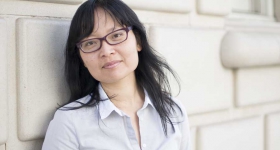 Our Favorite Comfort Foods: A Community Collection of Recipes
How to Be An Anti-Racist, Pro-Black Ally: A Resource List
When did you first recognize me as your own?: A Folio of Undocupoets Fellows
Deconstructing Cookbooks
September Lit: "the ear of the sky" by Kimarlee Nguyen
Mutual Regard: A Love Letter for the Origins of Black-Filipino Resistance
“My Translations Would Be Their Dreams”
A Brief (and Incomplete) List of Resources For a Mutual Regard BRIEF
JULY 2020 NONFICTION: MYTHMAKER
“If a People Burns ... a Nation Must Too”
A New Vietnamese Superhero
SEPTEMBER 2020 NONFICTION: THE RIGHT WAY
The Poetry and Nostalgia of Travel and Immigration
AUGUST 2020 NONFICTION: WITCHCRAFT
On Hai-Dang Phan’s Reenactments: Poems and Translations