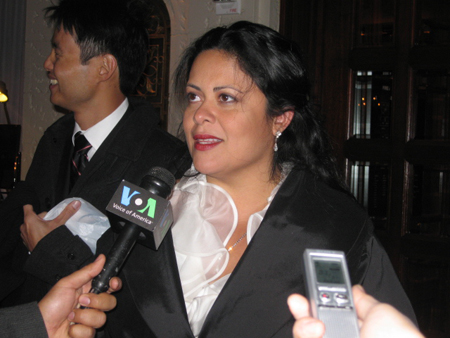 Gala time! We attend a gala hosted by the Asia Society at the St. Regis Hotel. We huddle in the lobby waiting for a parade of who's who to walk by so we can take a photo and grab a quote. We are lucky! We meet Maya Soetoro-Ng, Obama's sister, who greets us with kisses on our cheeks and a small hug.

Steven Chu, Secretary of Energy, also made a brief appearance at the Asia Society Gala. 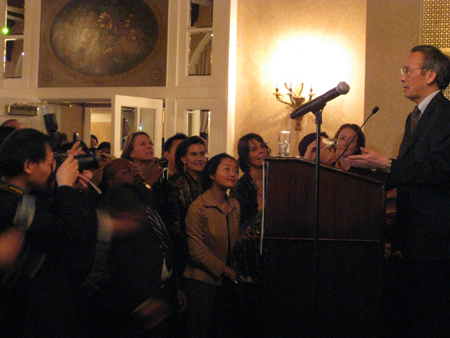 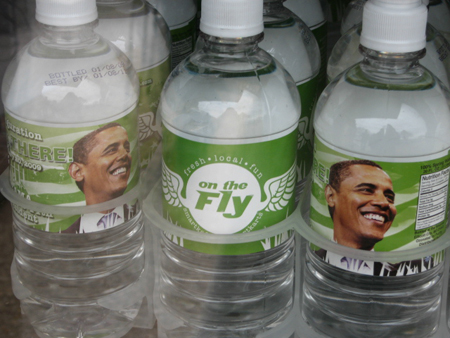 Braving the cold and the large crowds, we head to the Lincoln Memorial for the inaugural kickoff. We get inside the checkpoint after
having our bags and jackets searched, only to be pinned against a row
of porta-potties that lined the entire area of the Lincoln Memorial.
People climbed up into the trees and onto the portable toilets to get a better view. It got ugly when some -- miffed that the climbers were blocking views of a TV screen -- chanted for those sitting on top of the potties to fall in.

When the kickoff began, people cheered, especially when Denzel Washington came on. He looked good, but you knew that, right? 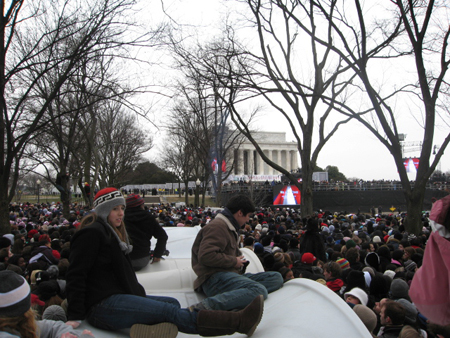 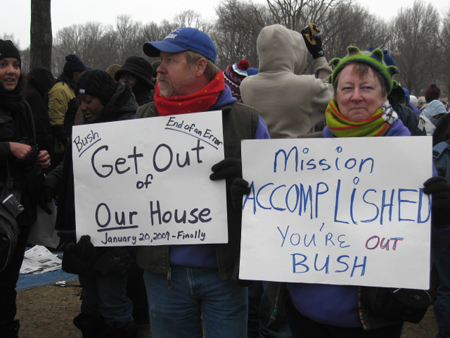 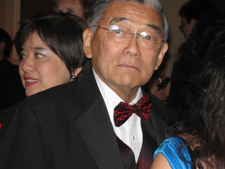 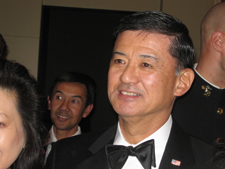 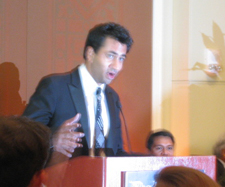 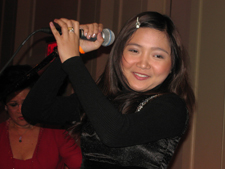 Charice Pempengo, a 15-year-old singing sensation currently working with Clive Davis, wowed the crowd with her vocals by singing “God Bless America” and “One Moment in Time.” We screamed and wept.

But the night is young. Next, we're off to Bohemians Caverns, a local jazz club, for Wonder-Full, an evening of nothing but Stevie Wonder songs. The crowd added Obama’s name to every song it
could. We dance the night into the morning, lasting until around 3 am. 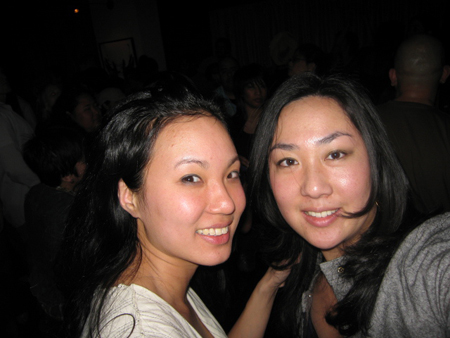 The original plan was to not sleep, then head over to the Mall at around 4 am. Well, at 4 am we decided to take a short nap. We awoke around 5:15 and headed our separate ways.

I headed to the Metro stop at 7 am. The entire platform was packed. Each train that stopped our way was packed to the hilt. After the fifth or sixth train passed us, we crossed over to the other side to ride toward the opposite way in the hopes of getting to our destination. 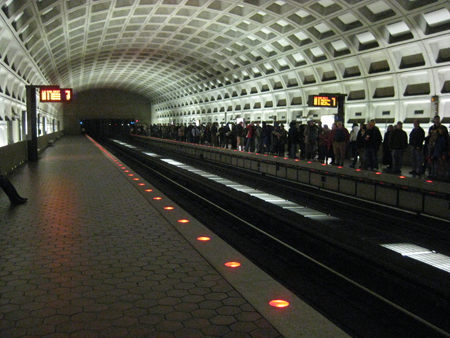 We ended up stuck in the tunnel for two hours. Someone had apparently been hit by a train (no death), and the cars ahead of us were lagging behind.

When we finally got off our stop, we walked for another 45 minutes to the Lincoln Memorial to avoid getting stuck. But when we got the Washington Monument, barricades prevented us from getting closer. We camped near a jumbo TV screen right next to the monument. 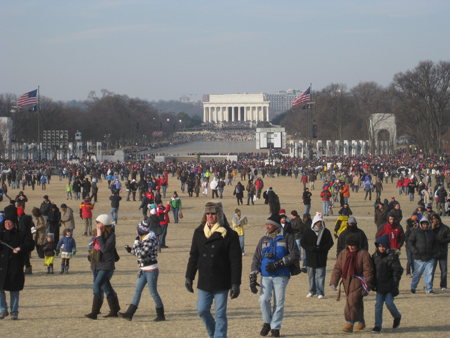 When the ceremony began, some people booed as the camera showed Bush. Mostly the crowd chanted, “Obama! Obama!” “It’s a new day!” and there were a lot of tears after Obama was sworn in. 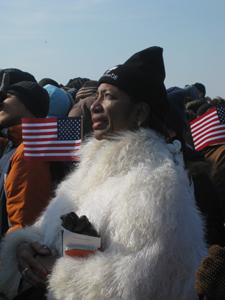 Kai, on the other hand, became one of the thousand traumatized survivors of the Purple Tunnel of Doom.

I woke up at 5 am after an hour of sleep. At dawn, people were already packed in the subways like sardines. From 7 am to noon, I waited in line to get into the swearing-in ceremony. The line didn’t move. In fact, there wasn’t even a line -- just a mob of ticket-holders who got increasingly frustrated and hostile as the hours went on. One woman fainted. Another woman -- her water broke!

I never made it in. When I reunited with Angela in the afternoon, I cried for six seconds. Then, got over it. 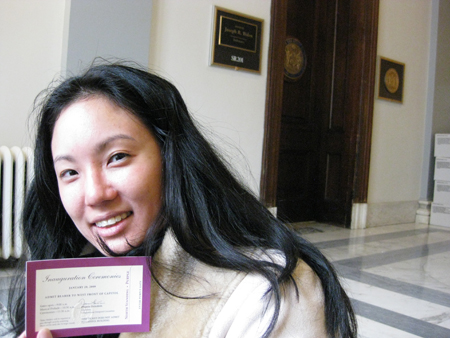 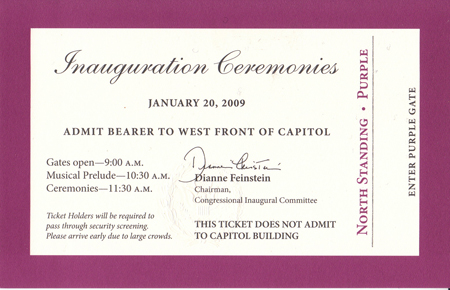 Kai and her purple ticket of doom.

January 21, Wednesday: Getting out of DC

Exhausted from the inauguration, we did not even make it to another gala and to our Chinatown bus that was headed back to Philly. We instead rented a car and drove up the next morning -- passing Baltimore (Kai’s birthplace!) to Philly (Angela’s birthplace!) to board a plane back to sunny Los Angeles.

Angela Chung is a writer in Los Angeles whose day job is as a public defender. 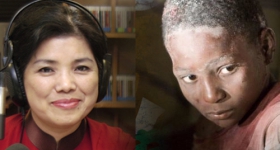 Carolyn wrote on Tue, 01/27/2009 - 4:19pm
Glad to see that Hypen represented in D.C! Good to read about your adventures traveling, but how did it feel to be there?
Angela wrote on Tue, 01/27/2009 - 9:37pm
without sounding trite, i was overwhelmed by the moment, just on the day of the inauguration, being around some 2 million people, and the energy that carries was moving ~i began community organizing during 2000 and that was all under the Bush regime and to have just the possibility that there is a possibility is enough for me to believe that things will transform.the last time i was in DC, i was inside the mall as the Pentagon was hit, and being evacuated, and the moment was pretty sad given that i was there to work on welfare rights. all of there that week now knew that welfare/social programs was going to be ignored. everyone knew even as early as 911 that iraq would be invaded again. i drove from dc to oakland at the time, taking 52 hours, and feeling like things were not going to be good for the next few years. i just didn't know how bad.i was there a total of 5 days and on a somewhat grueling schedule, recovering from a cold. i was going there initially as a witness and then as a reporter but the entire time, i felt like it was some kind of protest or direct action but to support the situation. long lines, waiting outside in the cold for 7 hours, standing for long periods of time, chanting every now and then...people had signs everywhere or art on the sidewalks or on the wallscoming from someone as cynical as me, i am strangely a little giddy.