I've been speaking to my son, who is two, primarily in Mandarin. I think it's paying off because he's like a little parrot now, repeating everything. The funniest thing is, when he really wants something, he will pull those Mandarin phrases out of thin air! I guess he's absorbing things even when I think he's not.

One of the main issues I'm encountering is that my English is so much better than my Mandarin. I'm pretty confident when it comes to speaking in Mandarin for basic things and in conversations, and I think my accent is okay for the most part. But it is just so much easier to speak in English.

It's also gets more complicated because my partner speaks to our child in Vietnamese, and we speak to each other in English. Most of the time, we have no idea what we each are saying to our child, since I don't understand Vietnamese and vice versa. To me, the "easiest" combination is where one parent speaks English to the child, while the other speaks the second language. But that would require one parent to give up their native tongue in favor of the other parent's language.

I've been reading a lot about raising bilingual children, and the verdict is out there, something I know firsthand and know instinctively: there are so many reasons to raise your child bilingual, if you can and have the will to. They range from practical reasons to emotional reasons. A lot of times it's connecting to your roots, the older generation, and to your culture. Other reasons -- especially for parents who are monolingual but want their children to speak a language other than English -- it's for practical, worldly reasons.

Sadly, it seems that immigrants lose this huge piece of their history and culture, and very quickly.

People have studied and written about how by the third generation -- immigrants' grandchildren (for example, my child) -- most will grow up speaking only English, after only two generations in the US! For Asian groups, it seems it's especially high, around 92 percent.

I'm curious to know about our readers -- were you raised bilingual? What was your experience like? I would also love to hear from other parents who are raising bi/multilingual children and how that has been. I also know friends whose parents spoke multiple languages, but chose to pass on only one language. And I now understand why that is. Many ethnic minorities (for example, ethnic Chinese from Vietnam) speak multiple languages, including a local dialect, Cantonese, Mandarin and Vietnamese. Their children may end up knowing a little of the local, less popular dialect but speaking Cantonese. Why did the parents choose this?, I wondered when I was younger and more naive. Now I understand! It's very tempting to give in to the dominant culture, and it gets more complicated the more languages you add. 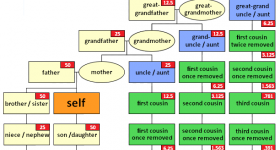