With Janice Mirikatani, also a former San Francisco poet laureate, she performed a very moving, two-voice poem, "Talking Tagalog," in which Chacon has dug a little deeper into the API writing convention of food and memory. In this excerpt, we can see her emphasis on the body and the physical page. It's the cutting and wide open space which reveal an absence of memory:

In her long poem, the intense "Blood, Sister," Chacon writes of consuming Filipina bodies, kinship, and dislocation. Read aloud this excerpt's lines, and hear its song:

This is the memory I am making up of you, little sister
from your photograph which uncurls like a plucked flower
on my refrigerator door, your face like an apostrophe, such an open
and tightened mark all at once--hesitating
to unwind, just on the brink

of telling me a secret. Do I not know you? Do we not bleed
the same
knurled feet

walking along Bataan with our American soldiers,
the same
angled hands

holding poisoned rice before the thrust of a Japanese bayonet,
do we not
both stink

from the skin with fermented shrimp paste
and glisten
with sweat

for the honeycombs of a soup of tripe?
Do we not
both bleed

of last names like an open mouth,
names made
from tongues

pressing clamshells behind the teeth?

Chacon's first book of poetry, Insides She Swallowed, will be published by West End Press, who carry excellent, politically and socially conscious work by multicultural authors such as the late Paula Gunn Allen, Cherríe Moraga, Naomi Quiñonez, and Luis Alberto Urrea, as well as the API authors Arlene Biala, Russell Leong and Nellie Wong. Chacon is in great company.


We believe that literature contains powerful symbols capable of transforming reality. We see promise in the fusion of old and new cultures, recognizing social, political, and personal change as essential to rescue us from worldwide exploitation and alienation. We believe not only that the personal is political, but the political is personal -- that progressive art must be brought to individual awareness. We believe that all people should be able to develop their own cultures in freedom, with tolerance for others and consideration of the natural world around them.

Our API writing community is not lacking in talented practitioners of progressive work, blending political and personal, craft and substance. This is the best of our writing tradition. I am pleased to see new voices such as Chacon emerging, and honoring this tradition.

Be on the lookout for Insides She Swallowed, which is forthcoming in October 2009. 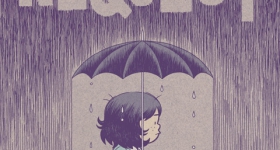