So there I was with my best friend from high school, a lone liberal arts head floating among a sea of engineering PhDs, when I heard, "So I was stuck in Canada..."

My friend turned to me, "Oh, you need to hear this story. He was marooned by immigration!"

Think of this post as a random sidebar in your newspaper, the local-interest story that is noteworthy by virtue of weirdness. Because my people, there he was: a PhD-wielding engineering professional on a totally legit work visa, trapped in Canada for three and a half months because why? Because he was brown, and because he happened to be working on something computer-ish

It should be noted that AAM (Anonymous Asian Man, not Angry Asian Man) is not terribly angry. He's primarily amused.

But the story goes that AAM walks into the US Consulate in Canada to do the very standard "I have to stamp my H-1B visa outside of the country in order to travel outside of the country" process. But this time, they escort him into a room. They ask about his research. Then they say he is to be detained for four to six weeks, and there is nothing he can do about it. So OK, he doesn't do anything about it. He checks into a hotel room. But then six weeks becomes two months and two months becomes three and a half. And this whole time, AAM doesn't have any information at all, except from Facebook.

Yes, Facebook. In the world of virtual community, AAM finds actual support, because there is an entire group of people the government consider categorical threats, all of whom are stuck, just like him. They can't go back to the US because they live at the happy nexus of foreign born and highly educated in a field Homeland Security does not trust. AAM reports that many of the detainees on Facebook were ethnically Asian, some of whom he knew. And by following their Facebook wall scribbles, he was able to guess at whether or not he should continue to wait for his visa. The group members would update their status, and from their reports he could guess at when his turn at the consulate might come.

After hearing his story, I started thinking about Angel Island's talking walls. The analogy is a little too perfect; it's awkward to say. And yet, once upon a time, not very long ago, there were these Chinese people. And they were heading towards Golden Mountain, USA. But on their way, they were stopped by the US government, for a very long time. In the interim there was no one to talk to, and in their voicelessness, they started inscribing themselves into the very spaces enclosing them. In this case, AAM stayed at a hotel and partied in his spare time, and luckily his company had a Canadian branch. So he could go to work too. And it's unlikely anyone is going to discover the Facebook group however many years into the future and go, "Whoa. There is some mad pain and history here." I can't even find the page now.

But to speak generally, it seems the primary difference between Angel Island and this mysterious Facebook wall is just history is repeating faster. 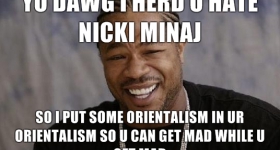 Samara wrote on Sat, 09/12/2009 - 2:30am
Thanks for sharing this story!
Carla wrote on Sat, 09/12/2009 - 3:10pm
Repeating, yes, quickly, yes, without a trace even more so. And the most interesting thing here is that it seems not enough people actually MIND.
anon wrote on Sun, 09/13/2009 - 4:22pm
It's easy to post anecdotal stories about immigration, but you aren't posting the whole story. There are always two sides.In short, your article has little value because it lacks facts - the information needed to decided who the offender and offended was. Is it possible that the PhD candidate was out of status? Was he involved in any criminal activity? We don't know, because key information is missing.Finally, let's assume for the sake of argument that there was someone in immigration jerking him around. There are always a few bad apples and it's his fault for hanging around a hotel waiting for someone else to decide his future. There are people he can call - such as a Congressman in the district where he lives.If someone is jerking you around you have two choices - take it, or push back. If you are in the right, you should have nothing to fear.
Joy wrote on Thu, 10/08/2009 - 10:01pm
Hi Anon, I'm sorry I let this thread die. I'm sorry you think my article has little value. I'll go ahead and fill-in a bit, and maybe this discussion will have some value?First, he was not out of status. He had a valid work visa. He has never been involved in any criminal activity. And he didn't sit around in the hotel. He went to work in Canada, and then he thought about whether or not he should go back to his country of birth. And the reason he didn't write his Congressman is because many on the Facebook site had already written. I don't know if anyone got a response.I'm going to volunteer that maybe the word "detained" was stronger than is warranted. The more exact wording is that he was prevented from re-entering the United States.But here's my side, very briefly: You say that if one is in the right, one should have nothing to fear. So, in this case, what happened?I'm sure we could debate back and forth on this topic, and that would be awesome. If anyone is still reading this thread and can offer an even deeper historical perspective than I have, or can give us some policy insight, I welcome that.