Senator Hart and Representative Celler died within five years of each
other, in 1976 and 1981, respectively. Senator Kennedy passed just six
months ago.

For all the work left to do, it‚Äôs difficult to overstate how important
that legislation was in shaping Asian America. Before 1965, the
attitude of the American government towards any permanent settlement of
Asians in the United States could best be described as overtly hostile.
That the vestiges of that era -- of blatant, sanctioned racism -- have faded is thanks in large part to the
work of people who would not have been here save for the Hart-Celler act. I don‚Äôt mean
to parrot a textbook. It‚Äôs just something that‚Äôs been on my mind.

For Haitian Americans, it‚Äôs much more difficult to feel complacent
about the reform of American immigration policy. Despite rampant
political and economic strife in Haiti, the United States has
consistently refused to open its doors to any number of Haitian
refugees. Since 1972, it has been virtually impossible to
locate any legislation favorable to the plight of Haitians attempting to
enter the United States.

Until now. In response to pressure from mainstream news outlets, as
well as general tides of goodwill emanating from the tragedy in Haiti,
the United States government has granted ‚Äútemporary protected status‚Äù
to all illegal immigrants from Haiti. As well it should.

But the move has now come under fire from conservative groups and politicians.

As Asian Americans, we should see these criticisms for what they are:
racist sentiments posturing as political recrimination. We need to be
aligned with the interests of Haiti, not merely in terms of its ravaged
material infrastructure but also in terms of the terrible predicament
in which Haitian Americans, legal or otherwise, are now captive. To
suggest Haitians are worthy of our assistance only within the confines
of their broken soil is at best callously hypocritical: while the
earthquake has been the most devastating natural tragedy to impact
Haiti, Haitians have, in the past, fled (or attempted to flee) the
ravages of dictatorship, corruption, racism, poverty, famine, disease,
and a series of natural calamities.

At worst, those criticisms are a gaunt veneer
painted upon despicable, deplorable discrimination.

What so privileges us that we should be spared the obligation to extend
our material resources to a nation literally reduced to rubble?
What so privileges me that I do not have to fumble in those ruins for
the broken bodies of my friends and relatives?

It most certainly is not our ‚Äúeconomic nightmare,‚Äù dire though it may
be. I am tempted to call it luck -- indiscriminate, arbitrary luck. But
for Asian Americans, the odds that we would be born in the United
States were, until only 45 years ago, microscopic; for Haitians, they
remain minute still. Yesterday, an 11-year-old Haitian girl died
because she could not be transported quickly enough to a hospital that
could save her. It is absurd and cruel to say that she died because she was unlucky.

The truth is that the United States has always held Haiti at a willful distance. Beneath the stories of despair coming from the disaster lies the question of why the plight of Haiti, one of the world's most destitute nations and only a handful of miles south of Florida, has been consistently ignored by the United States. Of why boatloads of Haitian refugees fleeing the nation have been turned back into political and socioeconomic chaos.

I understand that there are wrinkles to this question, and more generally to the notion that the United States is responsible for the quandaries of other countries. There are limits to the extent of our help, both personally and on a national scale. But at one basic level, granting Haitian Americans the space to breathe without threat of deportation is, in this time of crisis, a moral obligation.

Please refer to this post, by Claire, for ways to send assistance to Haiti. 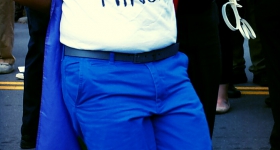 Not Your Model Minority: Asian Americans and the Immigration Fight