I'm far too ignorant on the matter to soapbox on what those changes might mean for Asian America, but I did think there was something very interesting tucked into the bill that I could unabashedly proclaim a very good thing: an accompanying set of reforms to the quagmire of student lending. A good portion of you are probably familiar with the previous system, where private lenders extended to students loans that were guaranteed by the federal government. That arrangement was nothing short of lucrative for those lenders -- earning the banking industry $70 billion, by some measures -- and unsurprisingly, they were staunch opponents of the bill.

Nonetheless, President Obama has signed it into law, cutting private lenders out of the process and allowing students to borrow money directly from the federal government. The money saved by removing the middlemen is expected to total nearly $60 billion over the next ten years, and will be funneled into Pell Grants and funding for community colleges, historically black colleges and universities (HBCUs), and other institutions specifically serving minority groups. Other provisions -- capping repayments at 10% of the student's income, canceling debts for public service -- are also aimed at increasing graduation rates and allowing more low-income students to attend college.

As the cost of higher education continues to skyrocket, reducing the burden of attending community colleges and other public institutions has to be considered a fundamentally good thing. I won't insult you by harping too much about how relatively many Asian Americans live below the poverty line, or about how, yes, there are in fact Asian American communities still underrepresented in higher education.

What is compelling, however, is that new funding is, in no insubstantial amount, specifically targeting HBCUs. We've spoken before on this blog about the need for unity with other minorities and disenfranchised groups in higher education, and especially now in light of recent flareups of racist sentiment. But many Asian American students still forget the privileges that do come with adequate representation -- privileges that black students are able to enjoy at virtually no other institution save those that can be called historically black.

HBCUs have, of necessity, relied heavily on federal funding, and their students have similarly relied on student loans to pay for the cost of attending these institutions. Changing the system of private lending allows these students more breathing room to finish their educations uninterrupted, and more generally signals a faith at the federal level that attending an HBCU, and any other institution that caters to the needs of minority groups, is a valuable thing. And that has to be considered a victory for all people of color. 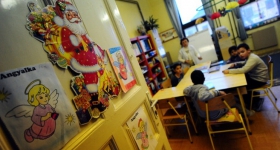