If the United States were a high school that all the states attended, then Arizona and Nebraska are competing to be the Drama Queen of the 2010 Immigration Dance. It’s like Mean Girls, except no one gets a piece of Lindsay Lohan’s crown and there’s no cheery “We’re all the same, so let’s treat each other with respect” message at the end.

All levity aside, the city of Fremont, NE, just passed a controversial ordinance this week prohibiting businesses and landlords from hiring or renting to people who are undocumented immigrants. Ordinance 5165 would apply to Fremont only, not the entire state.

Fremont is approaching the problem of undocumented immigrants through jobs and homes rather than law enforcement, as Arizona did. So far, there’s no mention of what penalties will be placed on the businesses and landlords (which are, presumably, owned by US citizens) that hire or rent to undocumented people.

Like supporters of the recent Arizona Senate Bill 1070, supporters of Ordinance 5165 say that it’s a lack of action from the federal government that drove them to approve a ban on the hiring or renting to undocumented immigrants.

Opponents say that the ordinance is unconstitutional because it violates the Supremacy Clause of the 14th amendment, which says that state courts may not overrule federal courts. There are also fears that the ordinance could fuel discrimination, as well as burden the city with expensive legal fees.

The Nebraska chapter of the American Civil Liberties Union has indicated that it will file a lawsuit. If its board approves, FOX News estimated that legal action could cost the city somewhere around $1 million a year to fight -- costs that would have to be covered by the city. Fremont officials say that they have plans in place to pay for the legal fees, such as cuts in city services and tax increases. I’m guessing the legal expenses will result in job cuts as well, which may end up hurting legal citizens of Fremont more than anything else.

What do you think of the latest immigration drama? Do you think this is an effective way of getting the federal government’s attention to focus on immigration reform? 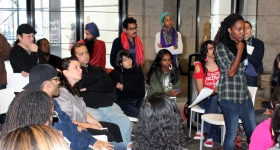