Okay, so I realize that the headline doesn’t actually make that much sense when you see the DREAM acronym spelled out, but I can never resist a good (or bad) pun. DREAM stands for the Development, Relief and Education for Alien Minors Act, which is a proposed federal legislation that would permit undocumented immigrant students, who are otherwise law-abiding citizens, a chance to apply citizenship.

Starting Monday, several days of lobbying were planned this week in Washington, DC. Activists and supporters from around the nation congregate to rally around a proposed law which would give undocumented youths a chance to become legal citizens. Many of these youths came into the country as babies and feel more connected to the US than to any other country.

I’m not gonna lie: the DREAM Act is an issue that I feel strongly about. I first found out about it when I was covering the diversity/education beat as a graduate student at Northwestern. For over a year, the youth group at the Korean American Resource and Cultural Center (KRCC) in Chicago has been organizing support for the DREAM Act. Some participated in national lobbying this week.

Karn Saetang, Youth Organizer at KRCC, said the introduction of SB1070 in Arizona made more and more groups see that immigration is an issue that needs to be addressed now. The DREAM Act is an integral part of that reform that he said can immediately help undocumented youths.

“We need comprehensive immigration reform, but there's also legislation out there that can help people now,” Saetang said. “The DREAM Act is one of those bills that can do just that. Every year, 65,000 undocumented high school students graduate high school and are basically left stranded. They want to continue their education, get good jobs, and contribute back to this country.”

Call me a bleeding heart liberal if you want, but it’s hard to see high school seniors with a perfect 4.0 GPAs turn their backs on college because they don’t have the legal papers to get the financial aid they need.

The proposed legislation was introduced in both the House and Senate in March 2009, but failed to pass. It would allow immigrant students who fit certain requirements, such as having graduated high school and not having a criminal record, to apply for temporary legal status. These students eventually could obtain permanent status and become eligible for citizenship if they complete college or serve in the US military.

Some opponents say the DREAM Act is amnesty disguised as an education initiative, but I would disagree. It takes hard work and dedication to graduate from college or serve in the military. It’s exactly the kind of thing that we encourage all of our young people to do in order to better themselves, to give back to society. We’re also living in a time where many educated immigrants are leaving the US for lucrative position in their home countries rather than deal with the US’s current immigration and visa restrictions. If the trend of valuable talents and skills going overseas continues, the US is in danger of a ‘brain drain.’

So what do you think? If a young person has the brains and the talents to go to college but not the papers, does the US benefit more from that person becoming a dishwasher or a doctor? Can the US afford turning away smart and ambitious youth who want to join the American work force and serve in the US military?

Check out more about the issue at the DREAM Act Portal and DREAM Activist. 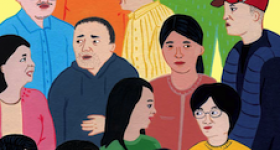