The door of Apartment 4A opens onto a tidy space redolent of warm oven and a young family’s bustle. Shawn and his spouse Yuka offer me green tea in earthenware and a precision-cut slice of homemade berry tart. Their daughter Hana, who turns two in a few weeks, had a rough night -- her face puffy with mosquito bites -- but twirls around energetically.

I recognize the large paintings hung in the living room. Shawn produced them in college, where we were first acquainted through an Asian American art show nearly a decade ago. They are as I remember them: playful, with figures suggesting comic-strips and emoticons, yet sophisticated in palette and meticulously limned. He hasn’t painted much in the intervening years, he tells me, his world since consumed by comics.

Shawn Cheng, 31, indie comicker and founder of the Partyka collective (pronounced PAR-tee-kah), is based in the Astoria neighborhood of Queens, New York. In the apartment he shares with Yuka, a makeup artist, and their daughter, one bedroom is his studio, replete with requisite Mac, pens and pencils, silkscreens, and a laundry line to dry fresh prints. Along the wall are low stacks of Shawn’s minicomics: impeccably designed, cut into neat rectangles, and sewn together by hand, an “obsessive craft aspect” that, he worries, can distract readers from the content. His recent minicomics include the kids’ counting books The Numbers of the Beasts (2010) and Hercules Counts to XII (2010), Whiskey Jack & Kid Coyote Meet the King of Stink (2009), and The Would-Be Bridegrooms (2008). He has exhibited work at the pop-culture purveyor Giant Robot in San Francisco (2010) and the New York Institute of Technology (2006), and was included in The Best American Comics (2008, Lynda Barry ed.) along with co-author and former Partyka member Sara Edward-Corbett for The Monkey and the Crab (2008).

In many ways, he exemplifies a pure strain of indie artist. He has significant fine-arts training but has opted for something more flexible and underground than what the gallery scene dictates. “The fine-arts path seemed to be strewn with so much history and infrastructure, and it’s so institutionalized that I wasn’t sure I was ready to deal with that kind of thing,” Shawn says. “There’s much more of a salesmanship that you need to do for fine arts, which is why I started working on comics right out of school. It seemed freer of those constraints and with more possibilities to explore.”

Another sign of his indie cred: Shawn has no trust fund or patron, no lavish studio, and, for now, no publisher. Partyka was conceived in this DIY spirit, responding to the question of “how to continue working as artists when you’re spending a lot of time at your dayjob,” he says. “Eventually we started having drawing days, so whenever we’d be hanging out all together, we’d start doodling, and we came up with the idea of this website.”

Over the past seven years, Partyka’s membership -- now Shawn, Matt Wiegle, and John Mejias -- has evolved along with its website, which features daily drawings, a catalog of minicomics, prints, and other art objects, as well as visiting guest artists. Partyka shows up regularly at comic conventions, which Shawn describes as “a giant swap meet, because right before the show opens you walk around and you give each other money.”

These days, with so much more of the general public aware of comics and their potential, Shawn and Partyka spend less time explaining what they do. “We’ve definitely benefited from more people knowing about things like minicomics and the whole idea of the graphic novel,” he says. Having grown up in Taiwan and New York, Shawn’s style reflects diverse influences, from Tsukioka Yoshitoshi’s 19th-century woodblock prints to manga and the work of Chris Ware. His favorites as a child were Dragonball and Calvin and Hobbes. Shawn expresses “gravitation toward universals, including base stories, folktales, fairytales, and mythology,” which run counter to the present trend of comics memoirs. He also loves a good monster, as evidenced on the Road of Knives “battle blog.”

Despite the success of Asian American comickers like Adrian Tomine, Derek Kirk Kim, Brian Lee O’Malley, and Gene Yang, Shawn does not identify an APA subculture within indie comics. For him it is all about the imagined world and its plethora of sources, a broader view than comics categories allow. “Manga is sort of presented as a whole separate genre when it’s translated and marketed here,” he says, “which is strange to me, because I grew up with both manga and American comics. To me, the distinction is a bit academic.”

Comic lovers can next see Shawn and his Partyka friends at the Brooklyn Comics and Graphics Festival on December 4, 2010. 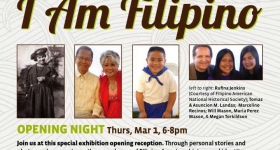 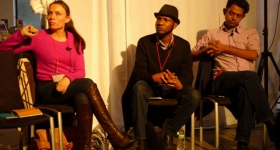 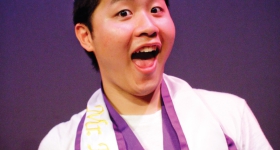