Ada Wong, a contestant on The Biggest Loser

Say what you will about NBC's long-running reality show The Biggest Loser (options include: cheesy, exploitative, unhealthy, an episode-long product placement for sugar-free gum and ground turkey meat), but I can't help but be fascinated by seeing its obese contestants drop substantial weight over the course of the season. Granted, by the show's finale -- which features a live reveal of the contestants' total body transformations -- some of the folks look a bit gaunt or over-tanned as they gun for that cash money prize offered up by the show's producers. And then suddenly the "I'm doing this for me!" spirit dissipates before the next commerical break.

But some of the players seem like they're truly looking for a life change which obesity has hindered for years. Admittedly, I'm hooked on the current season of The Biggest Loser because of one such contestant who happens to be Asian American. Ada Wong, whose NBC bio lists her as a 27-year-old project coordinator from San Francisco -- has one of the most compelling backstories of the season. At the age of three, her younger brother drowned while playing together in a kiddie pool, a fact that her parents have held over her for years. In this week's episode, it was revealed that her father used to tell her "It should have been you" during arguments.

This tension was augmented later in the season when every contestant's family sent in a home video greeting... except Ada's, leaving her in tears after a trainer pulled her aside to say there was no video waiting for her. During a make-over fashion show, she's relieved that the "loved one" waiting for her backstage is a female friend as she admits she was unsure how she'd react to her famiy being present after the home video diss.

Her struggle with a crippling lack of self-confidence and yearning for acceptance from her parents is a running theme, particularly now as Ada looks to be the frontrunner in the show, a gym darling to scary (Jillian Michaels) and adorable (Bob Harper) trainers alike. In the beginning of the season, Ada was barely a blip on the show's radar. But in recent episodes, she's been given ample camera time in which she discusses, though vaguely, the cultural limitations placed on Asian American children. She expresses a desire to start a youth program for young folks to learn social skills and develop self-esteem. However, thus far there has been no discussion of obesity in Asian American communities or cultural expectations of weight and other representations of "success" in general.

That absence of discussion leaves me quite conflicted, as issues of race and representation are wont to do.

By delving into this complicated Asian American family we run the risk of perpetuating the demeaning, unfeeling Asian parent stereotype, tied to the Image We Can Never Escape, known as the Model Minority and its undercurrents of perceived perpetual foreignness. We Asian Americans excel at the expense of that lil' thing known as human emotion. Oh, if we only had a heart.

But if we don't discuss Ada and her considerable family problems we leave several issues (namely those of physical, emotional, and mental health) for Asian Americans under the rug. When she discusses her family problems from a cultural standpoint, there may be Asian American viewers who feel a connection to that testimony, despite it coming from a fairly polarizing reality show aimed at an older, middle America demographic and is still heavily skewed toward white contestants in terms of representation. [The show's four Tongan American competitors had their status as "obese Pacific Islanders" repeated ad nauseam, making an uneasy causation between obesity and culture rather than correlation. Season 4 had Asian American contestant Kae Whang, but it predates my hopping on the Biggest Loser bandwagon.]

Observing in undergraduate Asian American Studies classes, I notice that young Asian Americans really respond to lecturers or guest speakers who make reference to failing their parents in some way. In a way, it's a shared discourse between Asian Americans, particularly those with immigrant parents. We can bemoan it, chuckle about it, and it's easily translatable across ages, ethnicities, etc. Typically it's presented comically and almost always elicits belly laughs, but there was a particular moment that made me think about the need for young people to have serious Asian American-specific discussions on family.

Sitting in on a guest presentation, an Asian American family and marriage counselor asked a class to name some mental health issues within the Asian American community. While some people called out variations of "It's thought to bring shame to the family," there was a sudden outpour from students about the problems they have in their own families with their parents, recounting how their self-esteem has been whittled away. Even the quietest students in the class spoke up and at length about their home life. In an hour-long academic class, the slightest window of opportunity was created for expressing family strife and the students ran with it.

An hour-long cheesy reality show with questionable moral and health standards and a lone Asian American contestant in the current cast could very well be another window.

So, after my own internal debate, I say Ada should spill it and NBC should air it. As the season wraps up and the contestants go home to continue their quest for weight loss until the finale, hopefully the camera will capture some significant interactions between Ada and her family. If the family bails from the camera, then I hope they catch Ada's candid response to it. In a perfect world, we wouldn't debate between omitting Asian American issues or presenting them because there'd be little fear of the content being manipulated into a cultural generalization.

In this imperfect world, I think sometimes it's okay to risk putting it out there. 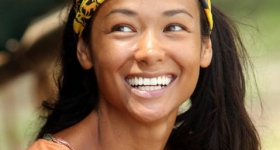 Jenny Rain wrote on Thu, 12/02/2010 - 8:06pm
I share many of your sentiments and concerns about perpetuating stereotypes of Asian Americans, but I don't think we're meant to "escape" the Model Minority image. The only way to escape it is to confront it and accept it as part of our history, something that shaped the way we act, think and behave. And then we move on from it. By bringing to light all of the self esteem issues that many AAPIs experience and suffer with in private, we can stop saving face and start saving kids from depression, anger and suicidal inclinations. I don't watch The Biggest Loser, but they ought to have a therapist or counselor on staff that can help contestants like Ada deal with her self esteem issues and relationship with her parents, not even necessarily an Asian American counselor.