Just for kicks, and because I like fluff pieces sometimes, we Hyphen staffers put together a list of BEST GIFTS EVAR that we received from our parents.

The idea came about a few weeks ago, when the Bay Area weather began hitting the upper 50s, and I began thinking about wearing socks again. While I was perusing my sock collection, I realized that at least half of my socks are from my mom. Is this an Asian thing or just a mom thing, or an Asian mom thing? Stocking stuffer takes on new meaning.

We're not trying to poke fun at our parents. Holidays are a stressful time for folks; there are a lot of expectations, maybe disappointments. I also realized that socks, toothpaste and toothbrushes are not uncommon as gifts, as well as gifts hinting at the idea that you need to diet or lose weight (sadly). Now that I'm a parent, I actually think the practical stuff -- the toothbrushes (fun ones, of course) -- make good gifts. Also, stuff you can eat, like mangoes. Anyway, I digress. Hopefully, my son will not hate me for giving him these things as "gifts" while his grandparents are lavishing him with all the toys he actually wants.

I asked my fellow Hyphenators what their best, or worst, gift was.

- "One Christmas, my dad went to Costco and bought all of our Christmas gifts. He put an equal number of items into four garbage bags (one for each kid) and had us go around in a circle blindly grabbing one item at a time from our bags (I guess my dad didn't want to gift wrap). My little brother got a smoked salmon. I was jealous." -- Margot, music editor

- "For years and years, in addition to other more fun presents, Santa would never forget to bring me and my two brothers a colorful new toothbrush, floss, mints (Altoids, Icebreakers, Mentos, Orbit gum -- whatever was the breath mint trend that year, or was on sale at Costco), and a piece of fruit. Nowadays, we've come to expect and depend on our annual hygiene stocking stuffers! And yes, I can't remember the last time I bought a pair of socks for myself. Christmas is a sock-restocking holiday for the Wong kids as well." -- Nicole, edit staff

- "All of my friends in college got care packages from their parents: candy and decorations at Halloween, teddy bears and pop-up cards on birthdays; we all know the drill. My Korean parents were not familiar with the concept (and I certainly didn't expect them to be), so I did not receive such things. One day about a month before graduation, I checked my mail and there was a large-ish box from home. Inside was a note from my mom: 'Here is some snack for your final exam' and a large bag of Doritos. To this day I don't know where that idea came from, nor do I know why she was under the impression that I could not procure my own Doritos at school." -- Dianne, Hyphen TV columnist

- "I got a dictionary once. One of those Unabridged Webster types, about 14 inches thick? It turned out to be a great place to store the clothes I was drawing for my paper dolls. I’d store party clothes under 'P' and school clothes under 'S.' Took it to college with me. Now I mostly use dictionary.com, but the big blue Webster still does a heck of a job as a museum for wardrobes." -- erin, blog co-editor

- "My lola (grandma) gave me a diet book last Christmas, even if I had just dropped 30 pounds the year before and didn't need to lose any more weight." -- Hyphen staffer who wished to remain anonymous for fear of getting in trouble with lola

- "The most memorable present (was when) my aunt bought me and my two sisters three of the same sweater, but in three different sizes, and somehow decided that they should be gifted in reverse order -- the small went to my older sister, the medium to me, and the large to my younger sister -- even though we were all about the same height and weight....This aunt had a history of giving less than fabulous gifts, to the point where, over the years, we became less offended and more just amused at her clear nonchalance towards our family." -- Irene, development coordinator

- "One year, I received nothing. I was told my xmas gift would be bundled into my bday (January) gift." -- Kevin, community outreach coordinator ... Oh, but before you feel sorry for Kevin, he adds, "The bday gift ended up being worth going empty handed for Christmas." Turns out it was his first snowboard + boots.

- "I used to live in a subdivision where all the kids had fancy 10-speed mountain bikes. I just had a little Huffy and had to struggle to keep up. After my family moved to a new neighborhood, my dad bought me a 10-speed mountain bike. It came with a cheesy note from my dad and everything. Ironically, by the time we moved I was had just outgrown the 'bike around the 'hood with my friends' phase, but it was still probably one of the nicest gifts I had ever gotten from him just because it was so immediate, and it reminded me that despite all the grief I give him, my dad tries pretty damn hard sometimes." -- Mic, blogger 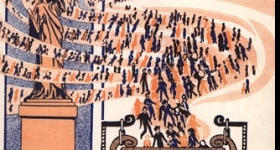