PBS's Independent Lens series will be premiering Christopher Wong's 2009 documentary Whatever It Takes tomorrow, March 30 (Check the link for your local listings).

The filmmakers were kind enough to send Hyphen a screener of the film (which I sadly missed at 2009's SFIAAFF), and I definitely recommend catching it while it airs from tomorrow into early April.

First of all: it's free! If you're not donating to PBS, you might as well as be a freeloadin' viewer.

Actual relevant reasons to watch this film: You get a glimpse into one of the many small New York City high schools (some with a student body of less than 200) by the NYC Department of Education as part of their plan to revitalize a failing public school system.

We meet Edward Tom, a former high-rollin' business exec whose life plan shifts from wanting to retire in luxury by the age of 30 to becoming the principal of the Bronx Center for Science and Mathematics. He knows every student's name, when they're absent, when they're grades are slipping, and alternates between acting as hard-ass disciplinarian to his students' biggest cheerleader. The students are exclusively of color and some -- such as featured student Sharifea -- struggle to stay motivated and utilize their full potential when problems at home (parental drug abuse, foster care, and the responsibility of caring for younger siblings) become too consuming, even with a summer program at Dartmouth College dangling just within her reach.

The film focuses heavily on Principal Tom's inspirational speeches and Sharifea's backstory, and I couldn't help but yearn for more footage of the individual classrooms: interactions between teachers and students; students with their classmates; parent involvement outside of parent-teacher meetings; and what strategies faculty use to prepare a significant portion of their students to qualify to sit for and pass the New York State Regents Exam.

But overall it's worth viewing, especially if you're concerned about the state of public education in the U.S. The film also makes me wistful; I could have had way better grades if my principal were a tough-talkin' Asian American dude who actually knew who the hell I was.

Watch Whatever It Takes on Independent Lens while you can, and keep an eye out in May when the series also airs S. Leo Chiang's A Village Called Versailles. 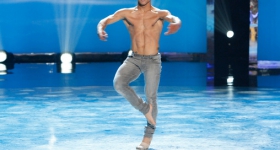