Food and Asian Americans are irrevocably linked. Much of this is due to chop suey imagery forged by the likes of TV chef Martin Yan or the perceived exoticness of Asian food and the explosion of fusion cuisine.

Because of this, many of the stereotypes about Asian Americans come from food. It's one of the reasons Founding Editor Melissa Hung proclaimed Hyphen would never publish a recipe or cover food in a way that doesn't uphold Hyphen's ideals.

Well, we broke her rule about recipes a few issues back with our story about sustainable seafood practices. And, we have another for Afro-Asian jung in the new Food section that debuts in The Inside/Out Issue of Hyphen, which will be out soon. Subscribe or look for it at a newsstand near you.

The Food section will hold true to Melissa's other goal of covering food from a social justice angle, which influences much of what Hyphen does.

In her introduction to the new section, Food Editor Nina Kahori Fallenbaum references Michael Pollan and his book, The Omnivore's Dilemma, for raising awareness about farming, food, politics and how they are thoroughly intertwined. His work provides a model for how we hope to cover the subject.

"Food is a real link to our heritage, so we should be the ones to craft the storyline about how Asian food became hybridized in the United States," Nina says.

We're open to suggestions for our Food section. food [at] hyphenmagazine.com (Contact Nina) if you have ideas about what to cover.

The rest of the Inside/Out Issue takes a look at what it means to be on the inside yet the outside, to occupy the foreground yet the background. Stories to look out for include a feature on the relevance of Asian American museums, how Asian American basketball hotshot and NBA prospect Jeremy Lin is still just a regular guy, the new face of the "outsider" enclave in Las Vegas' Chinatown, and the sassy stories of an all-Asian drag queen troupe, the Rice Rockettes.

And you won’t want to miss a moving First Person essay by Aly Morita on the life and career of her father, Pat, the actor best known for his Academy Award-nominated role as Mr. Miyagi in The Karate Kid.

The cover model is Mr. Hyphen Pahole Sookkasikon, who shows a side of himself that no one has ever seen.

In addition to the Afro-Asian jung recipe, the new Food section illustrates the science of the wok, and we learn about the issues facing restaurant workers in a fascinating conversation with Bonnie Kwon of the Restaurant Opportunities Center of Washington, DC. 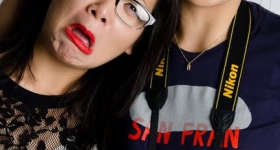 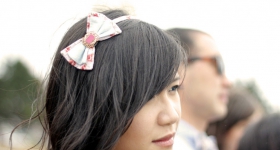