A federal judge last Wednesday struck down elements of SB 1070, a bill that I criticized as unfair and cruel in a column for my college newspaper a few months ago. SB 1070 allows law enforcement in Arizona to demand that anyone suspected of being an undocumented immigrant produce valid immigration papers or risk detention and deportation. Governor Brewer argues that SB 1070 will not lead to rampant racial profiling, although when pressed a few months ago she admitted that she doesn't know what an undocumented immigrant actually looks like.

The recent slew of anti-immigrant legislation in Arizona is a threat not only to Latino immigrants at whom it is clearly targeted, however, but also to Asian immigrants and citizens. Asians constitute a significant fraction of the 11 million undocumented immigrants living in the US today -- about a tenth, or 1 million. Many face the same problems that other undocumented immigrants do: they struggle to secure jobs, pay for school, and evade detection and deportation.

Many Asian Americans oppose SB 1070 and are calling for comprehensive immigration reform. The Asian American Writer's Workshop, for example, has launched a boycott against the state of Arizona recently called "Wordstrike," a petition that has been signed by a number of prominent Asian and non-Asian American authors and thinkers alike. Signatories include Jhumpa Lahiri and Noam Chomsky.

The Asian Pacific American Legal Center and the Asian American Justice Center are also teaming up with a number of other organizations, including the NAACP, Mexican American Legal Defense & Education Fund, Muslim American Society, to legally challenge SB 1070.

Brewer and her cohorts argue vehemently that they are merely enforcing the law and protecting Arizona's interests, but SB 1070 et al. are too cruel an answer to a problem that requires a much more nuanced solution. SB 1070 treats all undocumented immigrants (and naturalized immigrants and citizens of color) the same: as criminals, instead of actual human beings with real, complex and legitimate needs and interests. 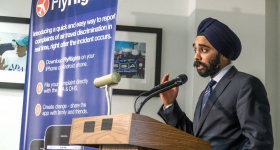 Anonymous wrote on Tue, 08/03/2010 - 2:53am
This law is ridiculous
Steve wrote on Fri, 08/13/2010 - 12:41pm
I believe whether the individual is Asian or Mexican, illegal is illegal meaning if you are here without papers, you are breaking the law. This story is also covered at http://weirdlawsuits.com/weird-lawsuits/arizona-vs-the-u-s-government-round-1/