The Center for Asian American Media, making good on its name, rolled out events at this year’s San Francisco International Asian American Film Festival that dealt with artistic forms not just limited to film. Moving beyond the movie screen and the standard director Q&A sessions, audiences had the opportunity to engage with the work and point of view of musicians, female comedians, gamers, comic book artists, and Canadians, that emphasized both the interactivity and community-driven spirit of the fest.

“People today consume media differently,” said Festival Director Masashi Niwano. “They have different ways of engaging with film. The festival is providing something unique that cannot be experienced at home.”

Here’s a re-cap of some of the most interesting, alternative events from the fest, which closed out last night in San Jose.

The “Issues” Issue: Decoding Race and the American Immigrant Experience in Comic Books

The coming-of-age or immigrant-coming-to-America story is well-trodden territory for books and movies, but what happens to the tale if your main character is a robot? It makes perfect sense to a comic book enthusiast, which I came to understand, as this panel opened my mind to the immense potential for creativity within the visual narrative structure of comic books. Topics I had never considered before in relation to comic books, were sketched out, colored in, and brought into focus.

Moderated by blogger-superhero Phil Yu -- whose alter ego Angry Asian Man keeps the nation safe from ignorance on Asian American news and social issues -- the panel featured insights from comic book writers and artists that ranged from musings on mainstream industry trends, to favorite alternative comics, to why comics are cooler now than when they used to read them.

The panel was a fluid conversation and dialogue, with panelists building on each other’s point while bringing a new perspective. The takeaways are certainly worth a read:

From Gene Yang, author of American Born Chinese, which was nominated for a National Book Award in 2006. Yang was a computer science programmer before becoming a high school teacher and comic book artist.

On the current 'cool factor' of comics: “There’s been a 'geekification' of America. The rise of technology has put geeks in a place of power, and they’ve brought their comic books with them. There’s also been a diversification of the genre. Comics aren’t just about superheroes and adolescent male power fantasies. We owe the coolness factor of comics to the 'coolification' of geeks and the diversification of the subject matter.”

From Hellen Jo, small press cartoonist originally from San Jose. Getting her start in local zines and self-published comics, she deals mostly in the coming-of-age genre of comics.

On race in comic books: “Love and Rockets by the Hernandez Brothers was one of the first comics I read. It was very formative for me. The characters are triply-fringed: gay, women, punk. I wanted to do something like that for Asian American women and girls. The goal is to show my characters to be as normal as possible so that everyone can relate to their stories.”

On the current 'cool factor' of comics: “You know something is cool when fringe communities are also doing it. Comics in the mainstream are huge in movies and all that, but even the weird people are doing it and making it their own.”

From Greg Pak, director of Robot Stories, who currently writes for Marvel Comics.

On his work: “It’s funny to be using all of my adult brain to work on things I was obsessed with as a kid.”

On race in comic books: “In comics, no one asks me, Why is that character Asian? There are never concerns about who’s getting cast as that character and if they're bankable. And it’s more often that the supporting cast is multi-racial and non-traditional.”

On sci-fi/fantasy and the immigrant experience: “Using the common tropes of science fiction and genre fantasy to describe immigration stories really makes sense because both deal with divided communities or being locked out of places. Heroes are people on the margins. I've realized that Luke Skywalker is kind of like my dad: bombs falling on homes, border patrol, trying to find hope, trying to get somewhere. In pop culture we celebrate law-breakers and those who fight back. Border-crossers could be seen as heroic as Luke Skywalker. We want to cross wires and make people see that.” The festival’s annual showcase of Asian American musicians passed in a haze of electro-pop sounds from the ephemeral and mysterious Silver Swans, DJ’ed sets, and performances by The Bangerz, Taiyo Na, B. Bravo, and Rani D.

The main attraction, however, was the “surprise” performance by the Rice Rockettes. The all-Asian American drag queen troupe arrived early, looking fabulous, to socialize with adoring fans and friends. As the crowd's anticipation reached its boiling point, they performed the irresistibly catchy song “Nobody” by the South Korean pop group the Wonder Girls, followed by Mr. Hyphen’s own Kyle Chu starring in a guest performance to “He’s Got the Power” by the ‘60s pop group The Exciters. The eclectic mix of music made for easy socializing and good vibes all around 111 Minna Gallery. Memorable giveaways included a photo booth in the Toyota Lounge that transformed a seven second video into a mini-flipbook!

The Power of Play: Art, Social Issues and Education in Games; and the Pixels, Politics and Play Exhibition

Speaking from a non-gamer perspective, attending this panel was only barely scratching the surface of the complex virtual worlds of gaming, but left me with a lot to chew on. Each speaker made a brisk presentation, talking a mile a minute and at times in gaming code, summarizing their work into bite-sized nuggets of consumable wisdom. Not an easy task, as the audience absorbed what they could of the fascinating perspectives cast out. Speakers addressed games and social issues, art in games, documentary and educational games. Similar to the comic books panel, the presentations made me think about the endless possibilities of expression through these mediums.

Eric Nakamura, editor and publisher of Giant Robot magazine, and self-proclaimed avid gamer, started getting professionally involved with games when he began showcasing games as art in their Giant Robot store in Los Angeles. Nakamura discussed the growing influence that games have on people’s art, and its ability to create social gatherings. His past work has paired indie game designers with indie comic artists to create new games, and even had the opportunity to create a Giant Robot art car, which shows a true fusion of art, technology, and video games. The car is inspired by Japan’s Famicom system, and functions as both a vehicle and a game console.

Game designer and producer Naomi Clark pointed out that despite stereotypes, women in their 30s and 40s are a huge demographic of gamers (around 55%). She talked about the upsurge in “casual games” and social games like all the successful ones on Facebook, and waxed and waned on the ethics behind the addictive gaming model (getting hooked by playing for free, then having to pay for upgrades and extras). She also introduced the concept of Games of Labor, as opposed to ones of Chance (like roulette), Skill (darts), and Strategy (chess). What makes Games of Labor appealing, she said, such as games like World of Warcraft, is that success is based on how much time is invested into the play. The fantasy is that if you persevere you’ll be rewarded with riches in the end, no matter what, which doesn’t always happen in real life.

Peter Brinson introduced the idea of documentary games to the panel discussion. He explained that what makes gaming different from other media are the expressive opportunities to put the individual into the actual experience, and have agency in what happens. “It’s media that puts you to work.” His game on display in the exhibition was called The Cat and the Coup, about the first democratically elected prime minister of Iran. It’s a puzzle game, but each level gives a fact about Dr. Mohammed Mossadegh’s life, in which you start at his death and move backwards in time. This is an example of how games can be used as supplementary education tools and complement to curriculum.

Building on the idea of documentary games, Susana Ruiz and Huy Truong of Take Action Games, not only present real-life statistics and facts in their games, but also encourage activism and a call to action. Their goal is “to make facts and figures resonate emotionally.” Their game Darfur is Dying targets American college students to learn about genocide in Sudan in a more experiential way. Finding Zoe is a game for young teenagers in that addresses gender violence and abusive teen dating relationships.

CAAM is also developing a game called Climbing Sacred Mountain, about the first group of Nepali Sherpa women to climbed Mt. Everest, based on the movie Daughters of Everest.

The variation in visual style and narrative between all of the games was vast, as visitors to the Superfrog Gallery could discover for themselves all weekend long. Many of the games by these panelists were on display and available for play, along with other works from indie game designers.

In the second half of the event, the audience was invited to participate in a video game design brainstorm. The audience made suggestions about what a new game could be about (played with the ideas of cuisine, mental illness, migration), as the panelists facilitated the collective group with the types of considerations that go into designing a game, and two illustrators drew up sketches of the ideas on the spot. Certainly not your average panel discussion, this event was a pleasing synthesis of information, connection, creation, and play.

Combining live music and experimental film, this event was on the insiders’ list of events not to be missed. Sponsored by the Consulate General of Canada, and on tour from the Toronto Reel Asian International Film Festival, the sold-out screening presented the works of seven Asian Canadian filmmakers, who each contributed a short piece based around their experience of Toronto’s Chinatown.

A live score was composed especially for the night, a collaboration of Canadian Arthur Young and San Francisco local Jack Tung. The shorts confronted themes of frugality, memory, family, and food, in a mostly playful and humorous way: packets of soy sauce are arranged and plunked on to simulate piano keys; fuzzy home movies of aunties and uncles suggest an inaccessibility to our history; an old woman recycles tissue paper wrapping into a balloon kite with ‘karaoke’ inspired audience participation; an apocalyptic future suggests our parents’ stash of plastic bags are the only thing that may save us; and animated proof that everyone loves Andy Lau.

David Chiu, President of the San Francisco Board of Supervisors, attended the event and offered his opinions on the importance and influence of a city's  Chinatown, making it clear he'd like to see a similar project on San Francisco's Chinatown in the near future.

The project displayed a true diversity of work from our neighbors to the north, abstract and challenging, and although the works did not address the more “serious” issues one might have expected (poverty, inequality, changing neighborhoods) it was a truly unique and multi-faceted event, portraying an abstract Chinatown that lives in the “mind space” of us all. 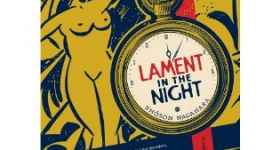