Anxiety over the loss of American jobs remains at fever pitch. A recent Paul Krugman column in the New York Times pronounced unemployed Americans “The Forgotten Millions.” According to Krugman, the lack of federal legislation on jobs amounted to virtual abandonment of the transiently and un- employed. Well, maybe a little more than mere abandonment: “[We’re] well on the way to creating a permanent underclass of the jobless.”

Undocumented immigration and outsourcing are perhaps the two most frequently mentioned culprits of the job heist. The imagery of theft is misleading, of course; undocumented workers aren’t “stealing” American jobs so much as working ogrish caricatures of them. As for those working outsourced jobs abroad? According to City University of New York sociologist Shehzad Nadeem, their roles couldn't, paradoxically,
look more different from the very (American) jobs they’re meant to simulate.

Nadeem, who recently authored the book Dead Ringers: How Outsourcing is Changing the Way Indians Understand Themselves, conducted his research among customer support “representatives” in the call-centers of India, perhaps the emblematic case of outsourced American labor. I haven’t yet read the book -- which scores impressively on the blurb-meter -- though I’ve read some of Nadeem’s scholarly work (warning: links lead to .pdf documents) and listened to an interview of his. Two things seem especially fascinating about the labor -- and laborers -- Nadeem studied: first, the ways in which time has been refigured by outsourcing; and second, what Nadeem calls “accent neutralization,” but which can be taken to stand for a whole nexus of practices meant to (re)train Indian workers culturally.

In a straightforward sense, workers in Indian call centers are just working longer shifts at later hours with fewer breaks -- unfortunate, of course, but hardly unexpected. Through Nadeem’s careful lens, however, we see how insufficient that summary is for capturing the way time -- in all its instantiations -- is acutely and strangely felt by 24-hour call center workers.

Calls are timed and performance is determined by how quickly -- down to the minute -- customers are cleared from the board. Calls are cycled at a pace of about five to ten seconds between each call -- compacting multiple days’ work at an American call center into a single day at an Indian call center. Often, a substantial proportion of pay is determined by performance, which is effectively measured by the number of calls a worker can jam into shift. This creates a perverse incentive structure in which not only vacation and sick days are penalized, but also trips to the bathroom (which are often timed anyway). Time is not merely a framework “within” which you work, but something that saturates the work itself: a persistent pressure to meet staccato deadlines, lined up incessantly through the day. Unsurprisingly, worker burnout is high, with average turnover at some firms reaching about one year.

The lateness of the work itself disrupts the lives of 24-hour call center workers, who take up smoking, up their caffeine intake, and eat late-night fast food. For some, these behaviors manifest in significant health problems. Workers struggle to maintain routine patterns of family life. Women confront lateness perhaps most harshly, not only because of gendered stigmas against being out of home at night and perceptions of (in)appropriate feminine behavior, but also for more brutal reasons: Nadeem notes the rape and murder of two women in 2005 and 2007, and other attacks on women returning home after late night shifts at call centers. All this suggests a sad, strange story: workers spend their “days” in places completely abstracted from general time, and emerge afterwards into the deep hours of night. The unrelenting monitoring of employees, of course, stops at the door.

In a February article in the Guardian, Nadeem discusses the practice of “accent neutralization,” which is not so much a practice but rather a whole system of training programs, language consultants, and eager students informed by global demand for a “neutral” English: geographically untraceable and perfectly intelligible across the world. Perhaps the best way to put it is not so much “accent neutralization,” then, but rather “neutral accentization”?

Far from being an isolated practice, accent neutralization fits in a broader program of cultural (re)training, in which Indian call center workers watch reality TV shows and films like American Pie that ostensibly offer a flavor of authentic American life. They concoct backstories and give themselves Western names, like Sean and “Cuthbert,” that serve not only as telephone-line personae but bleed into their modes of identification in everyday life. Finally, as “emotional laborers” who don faces of docility and eagerness to appease, Indian call center workers must attune themselves to the unspoken “cues” of American and British conversation. Says Nadeem in the above article: “Workers must be able to ‘pass’ as American or British and maintain their composure in the face of sometimes racist abuse by irate customers; it is simply part of their job.”

I’ll conclude my short, imperfect review of Nadeem’s work by borrowing a bit of Krugman’s scare language: yes, it seems, American unemployment has already created an “underclass” of the transiently employed. Yet, rather than being ignored or abandoned, the underclass is in fact intensely monitored; rather than taking furiously to the streets, they put on gentle, inviting faces; and rather than beating down your door, they sit, thousands of miles away, in fluorescently-lit cubicles with plastic headsets, waiting for you to ring irately about your broken TV.

*information in this section mostly derived from Nadeem's 2009 scholarly article, "The Uses and Abuses of Time: Globalization and Time Arbitrage in India's Outsourcing Industries," in the journal Global Networks. 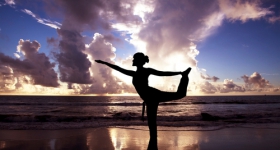 The Yoga Debate: An Existentially Challenged Desi Chimes In