I was one of the attendees at the first Banana APIA blogger's conference, held in 2009, where Asian American bloggers gathered and…well, we just gathered. I had a fantastic time meeting people but in terms of dialogue and programming, the panelists and handful of audience members were scrambling a bit as folks in the pilot phase of any endeavor are prone to do. Walking into Banana 2, I could tell that this was an entirely different bowl of fruit. A densely packed day of speakers, workshops and networking opportunities on the CBS lot in Studio City, Lac Su and Steve Nguyen's Banana 2 showed what a healthy budget and precise planning can do for an event.

The organizational expertise came courtesy of IW Group, an Asian American marketing and public relations firm. Upon entering the conference, I was pleasantly surprised to receive a tote bag filled with promotional material and miscellaneous swag. Granted, the bag was emblazoned with the McDonald’s logo and check-in was right next to a Verizon spokesperson, who for the love of all that is holy would not stop playing Far East Movement’s “Rocketeer” on his various tablets and gadgets. If you were wondering where the budget came from, ponder no more.

As a hack writer (but a writer nonetheless!), I felt that slight twinge, feeling like the corporate aspect of the day was antithetical to why and how so many APIAs begin their blogging careers (and, of course, antithetical for many of us who still don’t profit from our online writing). That clandestine typing of posts in the office while we're supposed to be making spreadsheets for our dreadful bosses or the mad pounding on a keyboard after a demoralizing late shift embodies a spirit that makes APIA blogging great, even when ad money and speaking engagements happen to roll in. I couldn't fully locate that spirit during the "Communications Connections: Building Bridges Between Bloggers, Corporations, and Agencies" panel

, when representatives from Warner Brothers and American Airlines spoke of honing in on the significant "Asian American market." I'm not naive enough to think our spending dollars don't matter or that there's not a correlation between Asian American media representation on all platforms and how corporations see us as a collective buying power. But juxtaposing our importance as a community with plugs for movies didn't make me feel that empowered. I did feel empowered though when Phil "Angry Asian Man" Yu commented during the panel, taking to task movie studios who pander to Asian American bloggers to promote "shit" films (his words, not mine ... though, I wish they had been mine) based on tenuous connections between these movies and Asian American audiences. Case in point: Pitching Zach Snyder's Sucker Punch because supporting castmember Vanessa Hudgens is proud of being half-Filipina. For reals, there's a promotional DVD for the movie sitting in my Golden Arches bag as I type this.

But when I thought about it some more I realized that I’m not rabidly anti-corporation (particularly when it came to the endless supply of free Diet Coke), that perhaps it's just my experience in nonprofit that renders me completely unfamiliar with how others successfully procure large amounts of money in order to, you know ... do things. And there were a lot of things being done at Banana 2. A blogging station was set up for newbies or people whose hands weren’t affixed to smartphones; a live Twitter feed -- which documented everything from audience questions to a room-wide call for aspirin -- was projected on a wall; news media was in attendance; and a live stream captured a full day of scheduled panels that began and ended on time with startling efficiency.

I chatted with Erin Yoshimura and Gil Asakawa, the duo behind visualizAsian.com (who graciously interviewed Hyphenites Lisa Lee and Harry Mok late last year) and Banana alumni. Of the changes made in the conference’s sophomore effort, Yoshimura said the difference was huge. “The production is phenomenal and really adds credibility." She continued, "It’s amazing how so many people are interested and excited. The place is packed.” On why they returned to Banana this year and served on the planning committee, Asakawa said, “We do it because it’s important. It’s about visibility and finding a voice. That’s what’s exciting. It’s inspiring Asian American people to use their voice. The talent is huge and growing exponentially.”

And talent was what made the conference worth my semi-treacherous drive to LA. Though I can't say I was compelled by every panel or speaker, there were some memorable moments to point out:

Lastly, I must point out this recap from the Politics Talaga? blog, which is one my favorite parts of Banana 2 despite its actually materializing after the event was over. Wry anecdotes about lunchline cutting aside, the writer did some excellent analysis on the high points of Banana 2 as well as critique, such as the lack of Southeast Asian and Pacific Islander representation and an imbalanced focus that had media-related issues take precedence over health, socioeconomic, and political concerns.

Highs and lows, critiques and praise, it's all part of the ongoing, multifaceted discussion in the APIA blogosphere. It's all good as long as we're talking, right? Right. Now let's go get a Big Mac. 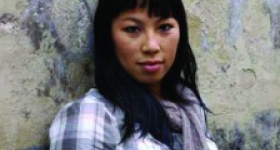 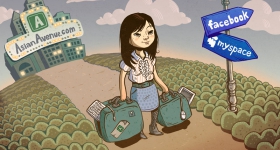 Gil Asakawa wrote on Fri, 03/04/2011 - 10:06am
Hey Sylvie, thanks for the report, and the great observations. Thanks also for the link to Politics Tagala -- he had great comments about B2 also. Here's to B3 and more inclusion, more topics and just plain more coolness.
Justin wrote on Fri, 03/04/2011 - 10:37am
Oh wow, Thanks for the shout out. Never expected to ever appear in hyphen. I will be sure to spend my newfound internet notoriety well. =)