Talking to Aaron Sencil, artistic director of Hui Tama Nui, was nothing less than inspirational. The company already has a reputation for original avant-garde works that conceive of Tahitian dance as an evolving contemporary art form, and this new piece for the San Francisco Ethnic Dance Festival is no exception. Rumia brings together eighty dancers from 10 different Tahitian dance companies, bringing disparate Tahitian dance styles into an exploration of freedom and unity.

Keep reading to find out about Aaron's view on tradition in art, the truly historic collaboration between himself and Les Grandes Ballets de Tahiti, and finally ... how the making of this piece was affected by Proposition 8!

Tell me first about your group’s relationship to traditional performance. How did you become a traditional Tahitian dancer, and where do you see the intersection in your work between preserving tradition and personal innovation?

Plus, the tricky thing with Tahitian tradition is that no matter what, whatever it “used to be” is still lost. Missionaries came in and destroyed almost everything to convert Tahitians to Europeans! Traditional costumes and instruments got destroyed in order for everyone to be Christian!

So one thing that a Tahitian choreographer and respected teacher of mine once said is, “Because our tradition got lost, we must find a new way to continue. Our tradition is creation.”

As far as our work specifically goes, there is admittedly a lot of controversy about our group itself. Traditionalists in the Tahitian community say “What you guys are doing is great for the show, but it’s not traditional …”

But we’re not saying it is. First of all, it’s already controversial because I don’t have a drop of Tahitian in me. I’m of mixed heritage -- Japanese, Portugese, Hawaiian, German, and then some. So there are some who might not consider my dance Tahitian dance, because I am not Tahitian. But there are other Tahitian elders who love what I do exactly because I am not Tahitian. They tell me, “Our youth do not do the dances anyway.” Second of all, our style of Tahitian dance for this show is Ori Rau, and Ori Rau is a style of Tahitian dance that is open to expression. Basically anything goes. I mean, the dance form just started maybe less than five years ago. It’s a totally new term anyway. This is why some Tahitian traditionalists say that Ori Rau is only for shows.

But that is beside the point for us. Frankly, traditional dance presentations usually last at least an hour. But we are creating this piece for theater, where the audience wants to be entertained with costumes and formation changes.

We understand that there is a fuller presentation of the dance, but as far as communicating to modern audiences and making sense of what you’re doing goes -- you have to show some type of movement! I mean, there is no way our performers could wear the same costumes the whole time and get our story across!

It’s a similar controversy with the San Francisco Ethnic Dance Festival itself. During an open conference, there was one guy in the audience who stated, “This is a cultural festival, and so the dances that should be presented should only be traditional.”  But, we [Hui Tama Nui] are not an educational documentary! We are sharing and exposing a wide audience to different styles of dance!

I don’t often think about traditional dance as a route to freedom… Can we talk about that a little? What are we going to see in the performance? What does it all mean?

The dancers are going to start blind-folded. Their movements are robotic, with lots of fighting and trying to get out… The music changes, and we’re introducing hip hop drums and electric guitars, and we’re totally out there! We’re depicting a sense of, “This is whatever I want to do!”

In this segment, each dancer’s costume is supposed to represent independence and individuality. For example, instead of brown hibiscus fiber skirts, we’re wearing spandex and using long, synthetic grass skirts dyed neon! We use mother-of-pearl accents to depict people breaking out of their shells!

And the point of bringing in this image out is to bring us back down to earth. It’s to show that we forget where come from sometimes. We forget about the people who care about us and get caught up in ourselves. We forget about our family and our roots. Now, instead of all the techno drums, we bring in more ancient instruments, like the nose flute and the hand drum. The music has an echo to it, and it’s saying, “Don’t go too far. Come back down to earth.”

There is a brief speech spoken in Tahitian, after a costume change. The speech is saying, “Unite. You may be this color or that color. You may be traditional or contemporary. That’s all fine. But, let’s learn to live together. Respect our ideas and histories. Let’s work together.”

The costumes at this point are all white as white symbolizes hope and unity. White is all colors. Mostly, I’m showing the value of unity and freedom, that we forget to think about them, how they relate to one another. And it’s also a subtle mix between old and new at this point. The costumes are now more traditional, more “grounded,” so to speak. But they’re also white. You couldn’t get a white costume together in Tahiti!

Notably here, the shell head-pieces are indicative of traditional costume. But each of our dancers laid-out his/her own design, and the shells they wear on their heads represent the different shells each company member has passed through as a person -- college, and so on. So really, every headpiece is each dancer’s individual creation and story. We all use the mother-of-pearl; that connects us as a group. But other than that, the headpieces are all different. It’s pretty cool.

After that, the dance is about celebration, unity, life…

There's a lot going on! Is there anything else especially notable about this piece that you want us to know? I've heard that this piece is not just Hui Tama Nui, but actually 10 other dance companies, all coming together?

This is the most dance companies have ever gotten together to perform in one piece. Dancers who usually compete against each other in dance competitions are going to perform together. Dancers who have very specific styles are all coming together in this one piece. There are many companies who only do traditional dancing, and this is a whole new thing for them.

Another major historical moment is our collaboration with the Les Grands Ballets de Tahiti. They only work with their group and no other group. So, it’s huge for them to work with us for this presentation, because they don’t work with anyone else, even in Tahiti. But for us, they came from Tahiti and stayed with me for a few weeks. We wrote the music for this piece together. It really showed me that Americans and Tahitians can get together, and that we can communicate around a common vision. Les Grands Ballets de Tahiti has traveled, and they’ve seen art in other countries. They’re risk-takers. For them, this stuff is an art, not just a cultural set of dances that should not be touched.

So the song that everyone sings at the end of this piece was written by them, which again, is totally historical because they never write for a piece that’s not their own. But they say that this is a piece that is meant to be shared by everyone. All they want is for us to take the song they wrote and use it, because it’s a song about passing on what we’ve learned, and we’ve written it in a traditional way, in a range that everyone can sing. The point is for us to all to be able to sing the song.

I've heard that this show is actually a kind of coming-out statement for you. How is it a coming out statement, and how is it being received by your community? How are you able to weave something as personal and individual as a statement about your sexuality into this … er, tradition-based dance performance?

Well, during the Proposition 8 debates, my partner asked me how I felt. I said it felt like I was blindfolded, and that’s why there are blindfolds in the piece. I guess you could say that the main spark for a lot of my artistic decisions was Prop 8. Once it didn’t go through, all our emotions just came out. It just sucked. Everything in the show, that’s everything we’re talking about.

In terms of the performance group itself, this is the second piece in which I’ve been more open with the group. But, this one is about being even more out there, and it’s a big deal. This is the first time an openly gay couple is running a Tahitian dance company and putting on a production. So there is some hesitancy. There were even company members wondering, “Am I gay if I am part of this piece?”

But now they get it! After performing it and listening to the description of the choreography, their eyes opened up. It was a big moment for us as a group. We didn’t lose anyone from the cast in the process, and for them to accept the content meant a lot to us. There are eighty people in the cast, and that means those are eighty more people whom we’ve changed. Now they see how it affects people, maybe not the people not most important to them personally, but they do see how crucial it is to certain people. That was a big thing.

This piece is so personal. You’re doing so much in just 10 minutes!

Yes, it is. It’s just a 10-minute piece, but my partner and I have gone through so much in the process, and because of the controversy, it must be perfect. It’s a huge project, and we can only practice once a week, on Sundays, because we have dancers who drive in from Fresno, who fly in from L.A., who come from Milpitas, Pittsburgh, Vallejo… Our dancers come from all over. So we can only ask for once a week. People work, and we’ve all sacrificed family birthday parties, and then some. My partner and I could only attend our nephew’s first communion for only an hour and missed out on the party. People drive in from Stockton; it’s insane the distance people are traveling. They believe in the message. 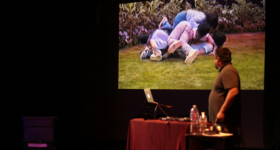