Mother Jones recently published "My Summer at an Indian Call Center," which looked at the other side of the "these people are stealing our jobs!" outsourcing scenario. It was written by Andrew Marantz, an American who spent a summer in India and took a training course for call center agents, and focused on his experiences during this training and his views of the industry. Some parts were interesting, such as the strange and amusing anecdotes from his cultural training bootcamp, and it provided a much needed counter to the idea that the current system of globalization brings greater happiness and prosperity to everyone. Points like this were particularly insightful:

Call-center employees gain their financial independence at the risk of an identity crisis. A BPO salary is contingent on the worker's ability to de-Indianize [16]: to adopt a Western name and accent and, to some extent, attitude. Aping Western culture has long been fashionable; in the call-center classroom, it's company policy. Agents know that their jobs only exist because of the low value the world market ascribes to Indian labor. The more they embrace the logic of global capitalism, the more they must confront the notion that they are worth less.

But its critique was ultimately limited, full of over-generalizations, and at times contradictory. Below are four reasons I found it so, and why I would hesitate to recommend this article.

By itself, this is a small omission and overgeneralization, but there are similar ones throughout this article, forming a pattern indicative of a lack of awareness or concern for the underlying hierarchies that govern many aspects of a call center employee's life, as well as a lack of nuance.

(2) The most interesting, as well as most questionable, parts of the article were those which talked about the cultural training call center agents are required to undergo. In this training, Marantz says,

trainees memorize colloquialisms and state capitals, study clips of Seinfeld and photos of Walmarts, and eat in cafeterias serving paneer burgers and pizza topped with lamb pepperoni. Trainers aim to impart something they call "international culture" -- which is, of course, no culture at all, but a garbled hybrid of Indian and Western signifiers designed to be recognizable to everyone and familiar to no one.

While in this instance learning "international culture" is obviously corporate doublespeak for "If you sound too Indian, you'll be fired," to claim that there's no international culture seems similar to the claim that white people have no culture, especially in its glossing over of underlying hierarchies. The point of this culture training, it must not be forgotten, is to give the Indians at these call centers names, accents, mannerisms, and cultural signifiers that help them to pass for Westerners, to circumvent the "protectionism" instincts of the callers. This isn't a melding of two cultures into something no one is familiar with; it's the attempted erasure of one to avoid instigating the anger and scorn of those from the other.

Furthermore, to say the signifiers of this "international culture" are recognizable to everyone and familiar to no one is to imply that the playing field is equal, that there's no hierarchy in the making of said signifiers or in the awareness/consumption of them. It glosses over the history of colonialism as well as current economic inequalities, and implies something that's partly disproven by the author's own experience: that an American, walking into a call center recruiting office, would have the same chances of being hired as an Indian.

Marantz further exacerbates this by characterizing call centers, where Indians are pressured to pass as Westerners, as "one of the largest intercultural exchanges in history." And the unacknowledged irony is that in this globalized world, it's Westerners such as Marantz -- who have spent a semester in Nepal, or gone through some call center training, or have had their jobs outsourced -- that largely define for international culture what it means to be an Indian call center agent.

(3) The author makes statements that seem factually questionable, such as the following:

Every month, thousands of Indians leave their Himalayan tribes and coastal fishing towns to seek work in business process outsourcing, which includes customer service, sales, and anything else foreign corporations hire Indians to do.

Most workers in the BPO industry, of which call centers form a part, are not from Himalayan tribes or coastal fishing towns, but are "urban English-speaking youths". One of the prerequisites of working at call centers, as Marantz himself states, is complete mastery of English, which is difficult to achieve in most schools to which Indians from Himalayan tribes and coastal fishing towns have access. Here, it seems like Marantz is trying to shove the lives of call center agents into a certain assimilation narrative -- ambitious young men leave their traditional communities to make a name for themselves in (increasingly Westernized) cities, and in the process lose their identity -- whether or not all the facts fit.

There are two other problems with this. The first, to paraphrase Charles Ramirez Berg, is that this assimilation narrative endorses the very system it sets out to criticize, because the only happy ending sends the ethnic/non-Western Other back to where he began, leaving him to cope with the negligible opportunities that exist for him there. The second is that it presents an oversimplified, binary view of the world. This is also evident in other parts of the article, where Marantz makes quite sweeping generalizations. For example, when describing a call center trainee, Marantz writes, "Growing up in rural Haryana, Nishant got his picture of the world from grainy Sylvester Stallone movies on a neighbor's TV. Like all the boys in his village, he dreamed of living in California."

For many young men and women, particularly those living near poverty, globalization has displaced nationalism as an ideal. For them, success is defined not in climbing local hierarchies, which can be quite rigid, but in bypassing them entirely and reaching affluence by finding work abroad. That said, I would have suspected at least one or two of the boys in Nishant's village to have dreams of becoming, say, world famous cricket players, professions that would not require living in California. That Marantz doesn't makes me wonder at the absoluteness of his perceptions. And from parts such as this --

Twenty years ago, before India opened its markets to the world, career prospects were bleak. Men might have been laborers or government workers, but even the most ambitious women often gave in to social pressure and stayed home.

-- it's clear that Marantz sees pre-1991 India as having almost nothing to offer ambitious men and women. That this statement ignores doctors, businessmen, professors, etc, is perhaps belaboring the obvious. What is also questionable is the implication that the last twenty years have brought nothing but progress. For while it's true that middle and upper class urban Indians, on average, have become more affluent in this time period (and not always, or even mainly, by adopting Western identities, even in the BPO industry, despite the impression this article gives), the same can't be said for others. When India bowed to international pressure and began opening its markets, some of the largely ignored consequences were greater income inequality, increased poverty, currency shocks, food insecurity, and a "crisis of extinction" faced by small rural farmers.

(4) The concluding paragraph of the article comprises the main reasons that I'm hesitant to recommend it. It begins:

In a sense, Arjuna is too westernized to be happy in India. He speaks with an American accent, listens to American rock music, and suffers from American-style malaise. In his more candid moments, he admits that life would have been easier if he had hewn to the traditional Indian path.

As stated above, I believe that this article contains a much needed -- though limited -- critique of the justifications of global free market capitalism. However, it often implicitly and explicitly reiterates the same essentialist East/West binary that such justifications rely on, the worldview that the East is conservative, traditional, stagnant, and ultimately (and deservedly) powerless against the dynamic, modern, independent, and ruggedly individualistic West. Furthermore, the statement that Arjuna is "too Westernized to be happy in India" contains an unthinking reliance on this East/West dichotomy, which is also present in the statements quoted above.

I know of desis who were born and brought up in America who are now living quite happily in India, as well as Indians who are unhappy with their "traditional Indian" path and those who are happy with their "modern Western" one (I put these in quotes because I would be quite curious to know the exact criteria that distinguish a traditional Indian path from a modern Western one). The crucial difference, it seems to me, isn't the degree of Westernization, but the available career opportunities. And however lucrative call center jobs might appear in the short-term, in the long-term such jobs are physically- and emotionally-demanding career dead-ends.

From the facts stated in the article, it can be inferred that Arjuna is highly educated and comes from a relatively privileged family. The problem isn't that such a person became too "Westernized to be happy in India," but that even with all his education and privileges, there were few options available to him. All that he -- and hundreds of thousands of other Indians -- have to show for their efforts are graveyard shift call center jobs that leave them physically and mentally disconnected from the world outside. Jobs where they're required to speak English even among themselves, where they must take timed bathroom breaks and don't have the freedom to step outside, where they're minutely judged on their ability to pass as those more valued in global hierarchies and passively endure whatever abuse the customer throws at them. And the problem is that these are some of the people who are considered globalization's success stories, and the hardships others face -- those, say, from "Himalayan tribes and coastal fishing towns" -- are generally greater and far more pressing. 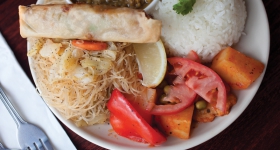