Happy new year, fellow television fans! The holidays are all well and good, but I am nothing without new TV (two weeks without, akk), so let's get back into the groove.

The shiniest new star in my DVR is Live to Dance, the show that premiered last week and brought us a) the return of everyone's favorite slightly insane judge -- sorry, "expert and mentor" -- Paula Abdul, b) adorable children, and c) yet another reality dance competition show, and no, there can never be enough. As if I weren't already wholly sold on the entire enterprise, Live to Dance lived up to its dance show precedents with many Asian American contestants, AND it takes place in the "Dance Dome," an Epcot-esque, utterly unnecessary structure in which much dancing, tear-shedding, and audience reactions are housed.

A dome for dance, you guys.

The show is structured like America's Got Talent, with Paula and her two fellow experts giving contestants either gold stars or red Xs. Who scored at least two of those coveted gold stars to make it past the audition round?

Even in a tiny photo, Jalen is insanely adorable

Sure, the kid  already made it to the pinnacle of the dance world when he shared a stage with Justin Bieber, but now that he's clinched a position as a semi-finalist, I can't wait to see what he's got in store for us this season. To tide you over in the meantime, see his performance here and check out his moves when he was on Ellen. Inside the Box barely fits inside this photo box

Will either of these crews make it? We'll see this week. Good luck to both teams, and go Jalen!

You guys know that nothing will cure me of my addiction to Calvin Tran on The Fashion Show, especially when he is assigned to make a traditional Korean wedding outfit in the gay wedding episode. Like the perfect storm that is Live to Dance, this too was an irresistible mix of things I love coming together. Being an Asian American, homosexual(?) man with particular tastes himself, you'd think that Calvin would have had empathy for his client Paul, a Korean American man marrying his partner Eric. By now you know that nothing of the sort happened. Not only did he tell Paul -- to his face -- that he would not make him a Korean outfit (is there something wrong with actually saying the word hanbok, or was that edited out for some reason?), but Calvin also complained endlessly about how large his client was. True, both Paul and Eric are sort of beefy guys, but a client is a client and they're the ones you got! Suck it up, man. He may look like he's listening here, but Calvin is actually thinking of his next cutting remark.

Things only deteriorated from there. The groom's hanbok is traditionally blue, which is what Paul wanted. Instead Calvin gave him a black garment, a far cry from the bright colors of a traditional Korean wedding ceremony. He also referred several times to the "kimono" he was making, later wondering if it looked too "kung fu." The fact that my Korean mother would faint at the thought of a Korean outfit being called a kimono aside, Calvin's thoughtless intermixing of distinct Asian cultures was a true disappointment, particularly from one of "our own."

Did Paul give him absolutely no guidance on how the garment should look (obviously something that could have easily been edited out)? I know that reality contestants aren't allowed Internet access, but surely a producer could have done a quick search online (like this) and given Calvin SOMEthing. No one's expecting you to know what a groom's hanbok looks like, Calvin, but the barest minimum of cultural sensitivity would be nice. At least his utter disregard for other people remains consistent week to week? Judge for yourself how his final look came out: Closer to Parliamentary robes than anything Korean.

Lots of Asian themes this week on our other consistent fave, Top Chef: All Stars. The chefs found themselves out of their element and functioning at their worst when thrust into the chaotic stew pot that is a dim sum kitchen. From buying Asian ingredients with only Chinese labels to using ovens that don't go above 350 degrees, it was a major challenge even before they had to feed hundreds of hardcore dim sum enthusiasts (read: Chinese families).

Our man Dale handily beat out the other chefs with his mouthwatering sweet sticky rice with Chinese bacon wrapped in a banana leaf, a relief after his horrifically embarrassing Quickfire pad thai with egg noodles that ended up being a couple of sad dough strips on a dampened plate. Of course, Dale was at a major advantage since he works dim sum regularly at his restaurant Buddakan (which I promise to check out sometime before the end of the season... for research. Cough). Some of Dale's fellow contestants thought that his experience should have led him to take on a leadership position in the kitchen, but that is a crucial strategic choice that could make or break a chef (as we saw with Casey, who took on extra responsibilities and went down for a poor dish). I can't blame the guy for not stepping up, but it would be cool to see just how Dale does run a kitchen. Want that. Gimme that.

What about everyone else? Well between the elderly Chinese gentleman derisively calling the food "Caucasian dim sum" and the fact that they brought my favorite Top Chef master Susur Lee on as a judge, this episode was wall to wall awesomeness even outside of Dale's performance. What struck (but unfortunately did not surprise) me the most was the casual, subtle racism thrown around in the episode. On one hand we have Fabio decrying, once again, his total unfamiliarity with Chinese food, as if that's a valid complaint for a PROFESSIONAL CHEF to have. I get a non-Korean fashion designer not knowing what a hanbok looks like, but I cannot abide an "all-star" chef not being familiar with Chinese dishes and ingredients. Maybe I'm reading a little too much into this, but it's not like we've seen Fabio bemoan having to cook French food, or classic American, or anything else that isn't square within his Italian wheelhouse. Add that to chefs eye-rolling when Angelo gets to cook "Asian" food of any sort, as if all East Asian cuisine is interchangeable and equally difficult, and I'm definitely sensing a bit of Us vs. Them when it comes to Western vs. Asian cooking.

Okay, Dianne, you're thinking. That's a liiiittle bit of a big accusation to make based on pretty weak evidence. Fair enough, wise reader! Try this one on for size: I loves me some Carla, but I cringed when she described guest judge Susur Lee, whom she remembered seeing on Top Chef Masters, as "being so centered and just so zen-like." That's interesting Carla, because my recollection of Susur is of his being a complete spazz in the kitchen, literally dashing all over, taking over multiple work spaces, shouting curses at himself, and in my favorite moment of the second season, hurling an entire blender and its contents into the trash when he deemed it broken, then swiftly grabbing another one. Zen? I agree that there's a method to his madness, thus the more or less acceptable "centered," but "zen" is, per Merriam-Webster (oh yeah, I'm that guy right now):

"a Japanese sect of Mahayana Buddhism that aims at enlightenment by direct intuition through meditation."

Enlightenment through meditation? Maybe if Susur meditates by channeling a kid hyped up on sugar. Note that the definition is not "being Asian." Okay, she may have misremembered the exact nature of Susur's performance, and "zen" is one of those words that's thrown around so much that it's become somewhat watered down and lost its real meaning, but I don't think that there's any denying that it was a lazy connection to make that, while not being overly racist, exactly, was careless and reductionist -- a dangerous road to let yourself go down when it comes to race and identity. All that said, I loved the episode and was so craving dim sum afterward that I actually dragged myself out of bed early Saturday to get me some here in Brooklyn. I'm pleased to report that the food flow was never-ending, the service was unhurried, and everything was absolutely DELICIOUS -- the exact opposite, I'm sorry to say, of what we saw on Top Chef this week. No inedible chicken feet here. Until next week! 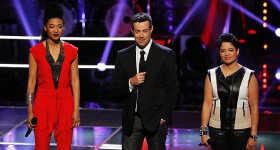 You misunderstand me -- I am OBSESSED with the Dance Dome in all its impractical, showy glory, and I was extremely disappointed to see that they apparently discarded it for the show proper. Though I guess that nonchalant indifference after so much hyping only further highlights how truly opulent the Dome of Dance is.