At last we have our "real" contestants for Top Chef Texas. The chefs that we didn't see last week had their chance to cook, and Paul Qui was the first of this group to get a chef's apron, impressing the judges with his grilled trout. Filipino American private chef Jonathan Baltazar was knocked out for not cooking brussels sprouts to the judges' liking (which is too bad -- I love a good sprout). Then we got a kick ass old photo of Beverly Kim and her family in which she and her sisters are rockin' some Asian perms to the max. Yesss. "I can I must I will," Beverly has written on a piece of paper that she keeps folded in her pocket. Um, I like you, Beverly. She cooks nakji bokum, a spicy Korean stir-fried octopus dish, even though she's "not familiar with" cooking octopus. No matter, as she makes it through. "I want to see more of this craziness," Tom says, and I agree. Jonathan and Beverly (from far left) are both like, "Whaaaat did I get myself into."

And then there was Ed Lee and the rest of the chefs who were "on the bubble," left to prove themselves a second time after not quite wowing the judges the first time around. "Outside of Kentucky, I'm a nobody," he interviewed before expressing his wish to change that perception. Ed also scoffed at a fellow competitor who works on a cruise ship, and he said he would kill the other five chefs he was competing with in order to get a spot. Harmless joking edited to look like more? Or ... is Ed kind of a jerk, maybe? Too soon to tell.

Ed's motivation was put to the test when he got what looked like a fairly significant cut while cooking. He immediately slapped a rubber glove over the wound so as to not lose a moment of time, but it quickly became apparent that the cut needed more attention. Cue a medic, who bandaged Ed's right hand while he continued cooking with the left. If the guy didn't make it through, it wouldn't be for lack of trying. Luckily, the judges were positive about his duck with barbeque sauce and sweet Asian custard, Emeril saying he loved the flavor and that the presentation was fantastic, and Tom thought it was a gutsy move to make mushi (a savory Japanese custard -- why did we get the generic "Asian" label on that in the dish description?). Hugh found the duck not quite cooked to perfection, but it didn't matter because Ed was through. Can't wait for the "real" show to start! Over on Work of Art, the artists had to create pieces based on a New York Times headline, and then incorporate newspapers into their works. Sara went with an article about the nuclear meltdown in Japan and created a somewhat disturbing but strangely delicate painting/collage of a merged cow/human creature standing atop a pile of bones made out of cut up pieces of newspaper. We didn't get to see much analysis of her work, as it landed in the safe middle of the group, but I would have been curious to hear more about her representation of the tragedy that took place in Japan and how it affected her. Kind of creepy, kind of pretty? But achingly sad no matter how you label it

Young chose a headline about Chinese artist Ai Weiwei, angling to represent the disappearance and censorship that the artist is known for. Young tried to bleach out the text of the article, but it wasn't working, so he stacked the newspapers and painted them entirely black, adding his own headline, "Where is Ai Weiwei," to the top of each pile. These piles were scattered throughout the gallery, and the judges loved them. Young took the top prize, which this time was getting work displayed in the New York Times building and $20,000, which the artist will use to pay for a trip to Korea for his mother, who is battling cancer. Nice one, Young! Don't worry, fellow Dartmouth fans: the Aires have made it to the semifinals of The Sing-Off. In a fun bit of coincidence for yours truly, the first song the Aires performed ("Ignition" by R. Kelly) was the big song of my junior year at Dartmouth. Yes, I am old. I also enjoyed their toned-down rendition of "Midnight Train to Georgia," one of my karaoke faves. Thanks for tailoring the set list to me, guys. In scripted shows (I know, it's easy to forget that I do actually follow scripted shows), Mike Chang's dad made another brief reappearance on Glee, confronting Mike about his secret participation in the school's production of West Side Story. Call me crazy, but I don't know of any parents, Asian or not, who chew out their kids in school hallways in between classes? Anyway, it turns out that Mr. Chang also gave up a dream (bring a tennis player) for the sake of making a dependable living, but Mike refused to follow the same path. His father fired back, telling Mike that he is "no longer my son until you get over this fantasy," and Mike shrugged with a "Then I guess I don't have a dad anymore." Ouch, you guys. Also, did this very intense plotline really have to be shoehorned into the episode all about teen sex?

Um, speaking of, Tina reveals in a girl talk chat that she and Mike had sex over the summer after talking about it. "He's my first love," Tina sighed dreamily. Call me a prude, but I was a bit disturbed by the ease with which just about ALL of the glee kids engaged in sexual relations. Did no one learn anything from Quinn's pregnancy?! I'm all for reflecting how life actually is for real American teens, but I did wonder why there wasn't really any counterpoint to the "Sex is great!" message of the episode. I'm not saying that Mike and Tina had to be the ones to hold out, but I did think, "You guys, too?" when Tina made her announcement. I am glad that Tina (and, one would assume, Mike) are in love, though. You crazy kids.

Glenn was featured again in this week's episode of The Walking Dead, though not to the gross/sexy degree he was last week. Desperate to connect with Maggie physically again ("I could die tomorrow," he reasons to Dale), Glenn ham-handedly tried to get Maggie in the sack, then nearly blew their entire cover when he less-than-subtly reacted to a note she passed to him during dinner (what is this, another high school? Sexy high school full of sex?). He further demonstrated his lack of finesse with women when he mused to Dale about whether all the ladies on the farm were "on their period." Oh, Glenn. Glenn, Glenn, Glenn. In the end it seemed like Glenn was finally a winner when he snuck out to meet Maggie for some hayloft fun, but then he ... stumbled upon a holding pen full of zombies? I am looking forward to hearing THAT explanation, and I hope Glenn learns to keep the old pie hole closed now and then.

Oh, and don't forget John Cho's visit to The Soup this week! He was promoting the new 3D Harold and Kumar movie and, may I say, lookin' pretty good doing it. Hi, John! 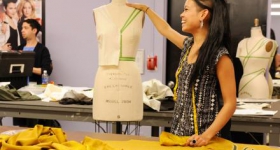