It's sort of perfect how Simon de Pury's half of the photo is all stoic pinstripes and dark backgrounds, while Young is all colors and feathers and fancy hats.

Bad news out of the way first: InTENsity was the first to be voted off of The X-Factor. Despite Ellona's pre-performance baby photos (aww) and her solo at the beginning, their rendition of "Kids in America" just didn't get them votes, and they were the first ones chosen by the judges to go home. Jeez, sorry guys. At least you each have nine other shoulders to cry on. Maybe you should have stuck with the lucky red jacket, Ellona

But don't worry, there's good news too! Glenn finally got his time to shine on The Walking Dead, getting featured in not one, but two major plot lines. First he was elected as the lucky (and slim) guy to be lowered down a well to loop a rope around a hideous, waterlogged zombie monster ... thing. It's exactly as pretty as it sounds. Well wouldn't you know it, the rope he was attached to became nearly completely untethered, and the goo-thing was almost able to reach Glenn's panicked, dangling body. Glenn's "friends" managed to hoist him up, figuring that they had to come up with a Plan B to remove the creature from their potential water source, but no worries, guys -- in the midst of the hubbub, Glenn did indeed manage to carry out his task. But guess what, Mr. Meltface was ripped in half as they were dragging him out of the well, thus negating the entire purpose of the enterprise, nearly killing Glenn for nothing, and creating the most disgusting scene I've seen on television since ... I guess sometime previously on The Walking Dead.

Wait, maybe it wasn't all for naught after all... After the well incident, Glenn went with Maggie, one of the people on the farm that our group has stumbled upon (or as Glenn refers to her, "Helloooo, farmer's daughter"), to ride horses into town and search for supplies at the very picked-over pharmacy. Their once-friendly chatter turned awkward as Glenn grew more and more aware that Maggie's kind of a hottie, and in the abandoned pharmacy, amidst ravaged vitamin racks and discarded boxes of tampons, their chemistry came to a head. Likely fueled by his heroic efforts earlier and a good dose of the loneliness she recognizes they both feel, Maggie and Glenn get intimate. Uh, guys? Zombies? All is well in the end, and I must say how happy I am to see good ol' Glenn get some. Never mind that Maggie turns cold on the ride back, telling him not to "spoil" what happened. I'm going to blame it on the stress of the overall situation. Nice one, Glenn!

On Work of Art, the artists had to create pieces inspired by works made by children. Young took the birds of his student's piece and created a self-portrait in which Young himself was a bird covered in colorful feathers. It was fun to watch him capture himself in mid-air on camera, especially since this was the first self-portrait we've seen Young create on the show. For me, the final product wasn't as exciting as the process and description of the work; instead of being transformed into another bird, Young looked to be wearing more of a feather suit. He was safe in the middle of the artists, so I guess the judges weren't terribly impressed either. It's cool and all, but not quite life-changing

Sara imitated the printed words of her student's work, but instead of choosing words she found compelling and fun like her girl did ("bunny" and "chocolate" were among the words she chose), Sara thought of words she associated with being that young age, and created a print that said "affair," "1/2 brother," and "divorse" (sic) to reflect her finding out at ten years old that her mother had an affair and had a son by another man. Needless to say, the subject matter was too intense and personal for the show, which all the kids attended. I was also incredibly curious about whether the misspell of "divorce" was deliberate or not, but I didn't get an answer because Sara broke down during judging, before she even found out she was in the bottom three. Sobbing, she could barely explain her piece to the judges, and they kindly refrained from getting into the story behind her words, only admonishing her for making the art about her instead of the kid's piece. In the end she was safe, but it was a close one. Maintain focus, Sara! I'm sorry, I can't get over the "divorse" thing

Oh right, the premiere of Top Chef Texas. Is it just me, or is it incredibly annoying when these shows bring in a million people and then spend a couple episodes culling it down to the people who will "really" be on the show? It's enough for Idol and the like to do this! I enjoy a good auditions episode, but the premiere of TCT felt irritatingly incomplete. We started with 29 chefs and saw some kicked off right away (like poor Nina Vicente of Seattle, who was so pressed for time that she couldn't plate her entree), some landed "on the bubble" with fates to be determined (like Edward Lee of New York, who was good but not great), and some have yet to be seen at all (like Beverly Kim of Chicago). I feel very unsatisfied, guys. Two episodes on casting is ridiculous, so I'm expecting the actual competition to be even more anticipation-worthy than ever... Hey, guys. I'm trying not to form any bonds with you in this uncertain Top Chef time.

On The Sing-Off, the Dartmouth Aires are still killin' it, this week with "We're Not Gonna Take It" and "Save a Horse, Ride a Cowboy" (the latter being something of a theme song in Wyoming, where I was last week visiting my friend/loyal reader Jen -- hi Jen!). Both songs were high energy as usual, though the boys got dinged for putting a little too much energy into their moves and not enough into the actual singing. They're still great though, don't worry.

The Dartmouth Aires really want to save horses.

Some late night interviews of note this week, too. My favorite and yours, Office actress/writer Mindy Kaling was on The Daily Show to promote her new book, Is Everyone Hanging Out Without Me? (And Other Concerns). I may have mentioned before that I went to college with Mindy, and SHE IS AMAZING. I am so excited to pick up this book. Also loved her strangely long riff on Sanjay Gupta; check out her interview here.

Beloved cellist Yo-Yo Ma appeared on The Colbert Report along with Stuart Duncan, Edgar Meyer, and Chris Thile to promote their album The Goat Rodeo Sessions. Yo-Yo was charming and amiable as usual while chatting with Colbert and his fellow musicians (see here), and the group performed a piece from the album (here) that had me intrigued. Hmm, this one might be a little too weird for my dad, but he could still find the album under the Christmas tree... Am I the only one who uses Yo-Yo Ma albums as a go-to gift for my dad? Yes? Okay. 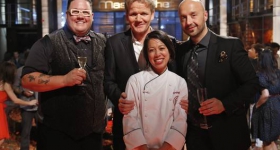 William Smocik wrote on Thu, 11/17/2011 - 8:56am
Dear Diane: This is the only way I know how to contact you. I want to call your attention to a Kickstarter campaign to get Yunah Hong's documentary about Anna May Wong on public TV. The film has been in five festivals. The Center for Asian American Media will send it out to public TV stations if we can find the money to buy broadcast rights to archival footage. Here's the story: http://www.kickstarter.com/projects/1107767469/get-anna-may-wong-on-publ... For more see Phil Chung's blog: http://youoffendmeyouoffendmyfamily.com/finding-anna-may-wong/ Thanks, Bill Smock (exec. producer)
Dianne Choie wrote on Fri, 11/18/2011 - 8:01am

I will definitely pass this info along; thank you!