At one point in our interview, seemingly apropos of nothing, Leland Yee says to me, “I’ve seen everything.”

I had no reason to doubt him.

Yee has been running for public office since 1988, and has made a lot of friends and enemies in the process. Sometimes it’s hard to say which he has more of. On one hand, he certainly knows what it's like to get dragged through the mud in the press. But on the other, he’s never lost an election, and, until Ed Lee threw his hat in San Francisco’s mayoral race in August, he was the odds-on favorite for the position.

But even with the inevitable ups and downs of a long career in politics, Yee conveys none of the exasperation that usually accompanies a statement like, “I’ve seen everything.” In fact, as our interview wore on it became clear that he considers his perspective an important selling point.

“The reason I’m the best candidate for mayor,” he explains matter-of-factly, “is because I have that wealth of experience in all areas. From the school board to the board of supervisors to the state level.”

Straight out of Canton

Yee’s family emigrated from Guangdong Province to San Francisco when he was three. He spent his childhood in a tiny apartment in Chinatown, and the disparity between life there and the often uninviting world of San Francisco outside had a formative impact on him. “[Chinatown] was a real ghetto back then,” he says. “You could live your whole life without ever leaving. There was a Chinese hospital and nearby you had a funeral parlor. But when you left, and you didn’t speak their language, you weren’t welcome.”

When asked if his parents or his upbringing encouraged him in any way to go into politics, he responds with a flat, “No.”

“My parents didn’t encourage me to go into politics at all. There was a stereotype in the Chinese community that sees politics with suspicion. Politicians aren’t honorable, they’re corrupt and unsavory.”

He is quick to add, however, that these stereotypes have fallen away over the past thirty years, as the Chinese community’s political influence has grown.

Nevertheless, for a long time, it didn’t seem as if Yee had any interest in holding political office. After graduating from UC Berkeley and earning his PhD in child psychology from the University of Hawaii at Manoa, he worked as a therapist and counselor for children from low-income families before opening up his own private practice in San Francisco’s Chinatown in the mid-‘80s.

It wasn’t until just after his 40th birthday that he won his first elected position on the board of San Francisco’s Unified School District. From there, he began building his political resume with meticulous care.

After two terms on the school board, including one as president, he ran for and won a seat on the city’s Board of Supervisors. Six years later, he became a State Assemblyman. Two years into that, he became the Assembly’s first Asian American Speaker pro Tempore, making him the second most powerful member of that chamber. And two years into that role, he was elected to the State Senate, a position he’s held ever since.

Even though Yee has spent the better part of a decade in Sacramento, he argues that his experience at the state level gives him a valuable perspective on municipal issues. Particularly, he says, when it comes to the trickle-down effects of state-level budgetary decisions.

Economic growth is without a doubt Yee’s number one focus. “We’re being forced to do more with less,” he says, “so the way I see it, we have three options to increase revenues: increase taxes, cut basic services, or work on economic growth. I want to help San Francisco expand.” A plan, and its destination.

He is especially keen on attracting biotech and green industries to the city, because, as he says, “they bring jobs at all levels.” In regard to small business development, he envisions a huge expansion of the city’s current small business development initiatives that will deploy scores of “case workers” throughout the city. These case workers would act as consultants and mentors to fledgling businesses, proactively addressing their needs.

Yee also outlines a detailed, historically minded plan for the revitalization of Chinatown -- a plan that pays homage to his childhood there, and testifies to that neighborhood’s ascendant political clout. His plan includes a range of initiatives, including the controversial multi-billion dollar Central Subway project that would facilitate pedestrian traffic in and out of Chinatown, as well as the revival of a night market.

In regard to public education, Yee says that “As I child advocate, I have an intensity of commitment to it.” His strategy is essentially to use schools as a point of distribution for basic services, and as community-building institutions. One of the broader goals extending from these reforms is, he says, keeping families in San Francisco. In recent decades, the city has seen its middle-class flee deteriorating public schools and exorbitant real estate prices for nearby, more family-friendly cities.

Over the past few weeks, Yee has found it useful to link the squeeze on middle-class families to the Occupy Wall Street movement currently sweeping the nation. If his Twitter feed can be trusted, he’s paid several visits to the encampment at Justin Herman Plaza, just across from the city’s famous Ferry Building -- even standing with a human barricade one night when reports of a possible police action began to emerge.

When asked why he identifies with the movement, he says, “Every day, I get calls from individuals who are underwater. Responsible people who are working their hearts out to make it work. The banks won’t work with them to modify their loans, but they’re solvent because of taxpayer wealth. I really stand with the 99%.”

Normally, when I’ve asked candidates to weigh in on the potentially historical nature of this election -- that San Francisco might elect its first Asian American mayor -- I’ve received responses that match my enthusiasm. But when I posed these questions to Yee, his responses were accompanied by sobering, historical perspective. “It’s great to see so many Chinese Americans in the race,” he says, “but the Chinese community still has a long way to go.”

For decades, he says, the Chinese community specifically was used as an “ATM machine” for political candidates, who would go to them to raise money, but cast a blind eye to their issues once they took office. Recently, Chinatown’s rising political power has forced politicians to take very seriously not only Chinese American issues, but Asian American issues more broadly.

He adds that, recently, San Francisco’s Chinese community has occasionally strayed from a more practical, issues-based politics, in favor of an alliance politics that scrutinizes their representatives’ loyalties.

A situation not altogether different, this writer would add, from contemporary American politics more generally.

Perhaps because of his academic training, Yee doesn’t shy away from complexity. One does indeed get the impression that he’s seen everything, and that he is less interested in generating enthusiasm or optimism than a sleeves-up focus on huge problems and their solutions.

So it seemed appropriate to ask Yee what his advice was for aspiring politicians.

“Run. Absolutely run,” he says. “Get involved. But they’ll turn your blemishes into warts. It’s not a bed of roses. If you’re prepared for that, then do it. If you have good ideas, then run.” The "Great Wall" of Interns. 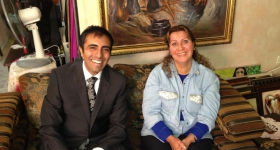