In his new book East Eats West: Writing in Two Hemispheres from Heyday Books, New America Media editor Andrew Lam recalls teenage memories of how his father, once a South Vietnamese general, drove his family all over Belgium to find Waterloo, where his hero, Napoleon, faced defeat. This excerpt is reprinted with permission.

There's a moment from many years ago that remains indelible on my mind. I don’t remember much on our way to Waterloo, except that the countryside was streaked and blurred, light green over darker green, all under a persistent gray sky.

Father drove. My older sister sat next to him and navigated, a map on her lap. I was 17 and pining to be back home with my first love, as I sat behind with Mother, who complained of a mild headache and wondered out loud why we needed to find this distant battlefield, and why we couldn’t go freshen up at our hotel after having just arrived in Belgium.

“It would be dark by the time we got to Waterloo had we gone to the hotel!” Father snapped. I didn’t have to turn to know Mother was rolling her eyes. If she had a choice she would not have been stuck in the backseat as we searched for some pasture where Napoleon was defeated long ago.

I thought I saw a sign in French. I said so to Father. Except it took me five minutes to do this. He cursed, calling me names in French. I responded in French, rather rudely, which surprised him, since I rarely spoke the language after we came to America.

I felt terrible afterwards, and the air in the car was tense. I remember thinking, were we still in the war and I his subordinate. Father, once a three-star general in the South Vietnamese army, no doubt would have me confined to the brig for whatever it was that I said.

On Vacation and Quarelling -- American Style

But it was a half-dozen years since the Vietnam War ended, and we’d already turned into an American family on a European vacation, complete with a sulky teenager stuck in the backseat and his responsible but equally sullen sister stuck in front, while their quarreling parents kept at it.

We finally stopped and asked for directions. Father drove frantically after that. We arrived at Waterloo at last -- and it was still bright out when he, my sister, and I rushed up the windswept knoll that overlooked the battlefield. Mother declined the climb and went to the shop to buy souvenirs, instead.

As we climbed, Father could barely hide his excitement. When we finally stood on top, almost out of breath, he began to narrate the story of the old battle. He pointed wildly: where Napoleon's army stood, which direction the Prussian soldiers came from, and how the Duke of Wellington arrived with his Anglo-Allied forces to turn the tide, defeating Father's favorite military tactician and ultimately exiling him to St. Helena, where he died a few years later.

“It rained before the battle,” he was saying. “It delayed Napoleon, you see. He wanted the ground to dry out a little before the attack.” Wellington's army was positioned on Mt. St. Jean but they withstood repeated attacks. By nightfall they counterattacked and drove the French from the field. Then the Prussians broke through Napoleon's right flank as his army was pulling back. There were heavy losses on all sides.

I already knew the story. I also knew that Father was, in part, trying to make up for cursing at me by telling the old story. It occurred to me later that never once had Father told any of his children a fairy tale, and that most likely he remembered none. But this story of a long-ago battle he had told many times, turning our dining room table into the battlefield, our spoons and chopsticks into battalions, bowls into hills. The Duke of Wellington was drunk. Napoleon was not. But there was nothing he could do, was there, against fate?

My father was second in command at I Corps near the end of the war. He was fighting at the DMZ [demilitarized zone] and nearly lost his life but managed to escape back to Saigon. He boarded a naval ship on the day Saigon fell and headed for Guam. After four years in America, in a remarkable feat, he had remade himself, at age 46, into a bank executive.

The Life They Lost in Vietnam

Yet Father's passion remains extraterritorial. Life in America turned out to be, for him and for my mother, a big letdown, a reality defined by disappointment and a deep sense of loss. They would never have in America what had been taken from them in Vietnam.

For years their biography of sorts was on display on the mantel in the living room. In one photo, Father is emerging from his helicopter, silver baton in his left hand, his right reaching out to a young army officer who stands with hunched shoulders under the whirling rotor blades that send wind to press down on the elephant grass. In the distance are the silhouettes of bent-backed farmers in conical hats. Father’s face is dark and somber.

In another: Mother and Father. “A beautiful couple” would be understating it. She wears her multistranded gold-bead necklace over her lavender brocade. She looks stunning and regal. Father, on the thin side, is dignified and suave in a gray-silk suit, a cigarette in his hand. Behind them on the wall hang two Chinese brush paintings, one showing Chinese fairies on clouds, the other a ferocious dragon descending from a misty mountain.

Sometimes when I think of that picture I have a flashback to being a little boy, hiding inside Mother’s walk-in closet, the size of a small room, with windows opened and the breeze swaying the hundred or so painted and embroidered ao dai dresses and brocades. I can still smell the camphor and Mother's perfume, Guerlain. I am lost amid the fabric.

None of the pictures show how it all ended. There are plenty of those online, under “Fall of Saigon” or “April 30, 1975,” “Vietnam evacuation,” “Evacuation+Saigon.” Tens of thousands of them. Many pictures show refugees in crowded cargo planes landing in the Philippines, and I suppose somewhere there are pictures of me and my mother and sister and two grandmothers emerging from one of those planes with small bags in our hands, looking very, very lost.

I remember much of the day we left: The wails of a woman, the smell of vomit, night turning into day then back into night, the humming of the plane’s engines, then we landed in Subic Bay. Then there's another flight to Guam. Then green tents flapping in the wind, a scorching sun, a very long line for food, adults weeping and screaming as the BBC announces the fall of Saigon.

Father left after us, on a warship with hundreds of well-placed others, for the U.S. Navy base at Subic Bay and asylum. He folded away his army uniform, changed into a pair of jeans and a T-shirt, and tossed his gun into the sea.

After that, Vietnam, his defeat, his raison d’être, his crucible, was never far from his consciousness. The war, his role in it, have become for him the touchstone of his life. He knows wars, studies wars, has read countless books on battle strategies and warfare. And Napoleon is his hero.

Just 17, Homesick and In Love

After so many years of hearing about Napoleon, it should have been exciting seeing the place finally, yet that late summer afternoon I was no longer intrigued. I was homesick for California. I missed my lover terribly, my first love—our tender kisses, the smell of our sweat.

I kept replaying our visit to the beach, with the breeze carrying the smell of the ocean, how shy we both were, yet how inextricably drawn we were to one another, the orange-red sunset and an unfinished sand castle between us. All I could think of the entire trip was getting back to California to possess, to love.

This was why it had taken me a long time to process that we were going in the wrong direction. It was also why, while Father talked on, I was miles away. It was only when he himself stopped talking and looked to the far-off distance, to where I supposed Napoleon fled, that I turned to look too.

But I didn’t see anything resembling a battlefield. What I saw was a thin gray mist drifting lazily over a green pasture below, and in the cold air I smelled a musky odor of newly upturned earth. The pastoral scene at twilight stirred in me no martial passion, but instead poetry, and an unspeakable yearning.

Father talked on. His hair was tussled by the wind, his face contemplative. As I watched him, the image came to me suddenly of him on that naval ship near the Philippines. The government of the Philippines wouldn’t let the South Vietnamese ship dock unless all personnel turned in their arms. I imagined him, his face creased with contemplation as he stared at his gun for some time before tossing it into the churning sea below.

Something, a welling, a sharp pain, rose suddenly within me then, and it surprised me that I hadn’t felt anything like it before, and it felt close to pity. It lodged in my throat and it took some effort not to cry out loud.

There on the wind-blown hill, with the statue of a lion on a pedestal above us as a memorial for all fallen soldiers, Father seemed so utterly alone. Then suddenly, so was I. Frightened and full of my own inarticulate longings, I had to look away for fear that Father might see tears brim in my eyes and think that I, too, was mourning for Napoleon’s defeat.

I went on to college in the fall, in any case, and then, after bouts of bickering with my parents, on to my writing life, following my own passion. I’ve been to Europe a few times since then, to Amsterdam and even to Brussels, and although I’d think about it, even entertain the idea, not once did I feel compelled to visit that old battlefield again. 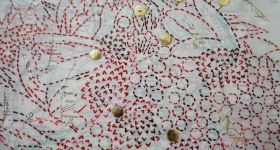