A familiar pose for anyone taking a photo of Asians

This week we met the rest of the groups competing on America's Best Dance Crew, including the (non-erotic, sorry boys) pole dancing ladies of Jag6ed and the Taiwanese B-boys of Instant Noodles. Unfortunately, neither crew succeeded in really wowing the judges during their first foray on stage.

Fun fact about Jag6ed member Jessica Agdeppa: her older sister Alexie was one of the finalists on the most recent season of So You Think You Can Dance. Whatta family. Jessica and her fellow crew members demonstrated just how strong you need to be to stay up on the pole (hint: very), but the judges wanted to see more. "Dig deeper and define what you want to say," D-trix suggested before describing how the performance gave him hard nipples (calm down, dude). Lil' Mama wanted them to "kick it up a notch," and JC noted how their routine included a lot of "walking around." Ouch, not a great reception. Judge for yourself here (really wish that MTV would post clips of the individual dances, erg). Also check out Jag6ed here and on Facebook. These ladies are strong as hell

The Instant Noodles boys played up their shared background; they went to high school together in Taiwan and all came to California to college. Some Mandarin was busted out, then they promised, "We will serve you in three minutes or less!" Cute. However, they started on a low note when member Mike "Chu Ming" Yang ruptured his Achilles tendon, setting them back a member. They still managed to incorporate Mike, however, having him act as the off-stage photographer during their performance to Ke$ha's "Dirty Picture." This gave them the opportunity to do some hallmarks of Asian photos, including peace signs, obviously (though I didn't see my favorite, the kitty pose). Again the judges were harsh, Lil' Mama wanting to see more choreography, JC kind of lamely complimenting how low to the floor their moves were, and D-trix saying that he out and out "didn't like it at all," calling them predictable and using the same moves that people have seen before. Yeeks. See what you think here and visit the Noodles on Tumblr and on Facebook. You guys are adorable, but we need more!

Jag6ed and Instant Noodles were unsurprisingly in the bottom two with the Noodles ultimately making it through. As much as I like them, I can't help but feel they're a pale derivative of last year's silly but immensely talented ABDC winners, Poreotics. Here's hoping that they amp things up real quickly (instantly?).

Switching gears completely, the lovely Michelle Krusiec guest-starred on this week's Community as Pierce's mysterious new fiancée. The Asian puns began from the moment she appeared onscreen, Pierce asking Jeff, "Who's the dumpling with the nice Asian pair?" It took a second viewing for me to catch the Asian pair/Asian pear line. Maybe I'm just slow, but ... kind of subtle for a race pun, guys. Turns out the woman's name is Wu Mei, she's Chinese, and she speaks with the stilted, accented, broken yet surprisingly well-vocabulary'd English that we've all come to expect from any foreign Asian character: She turns down Jeff's advances with, "Not ... interested. Please take ... weird haircut ... stupid grin ... and go sniff ... another dog's ass." Not since Jin asked Jack "Would you like some ... cereal?" on Lost have I felt such skepticism. Of course non-English speakers will have accents, dropped pronouns, and hesitant cadences in their speech, but TV foreigners always seem to be oddly familiar with some particularities of the English language. Call me a stickler, I guess. She can zing you in any language

Chang had to chime in on Jeff's rejection with some more punning: "The red dragon ordered a number 37 with a side of pork fried snap!" Later on, however, he provided Jeff with crucial information on Wu Mei's swift engagement to Pierce, particularly perplexing because she is in need of neither money nor citizenship. Her last name, Hong Long, means dragon, and because "they're nuts over there," it's actually her middle name, and Wu is her last name. Jeff reveals to everyone at the engagement party that Wu Mei is actually the heiress to the Red Dragon wet wipes dynasty, which is trying to buy out Pierce's wet wipe company in Asia. Immediately dropping the feigned (phew) accent and naive act, Wu Mei angrily says, "Very impressive, Veronica Mars, you learned how to Google." But don't worry, the episode didn't end with the big dramatic reveal of the duplicitous dragon lady. Jeff brought Pierce and Wu Mei back together, saying "You're both rude, you're both deceitful and racist, and you both come from moist wipe dynasties." They agree to go on a real date, Pierce suggesting Mexican for dinner and Wu Mei countering with, "How about Thai? They're like Chinese Mexicans." I guess this doesn't bode well according to posts I've seen elsewhere that charge Community with making all their minority characters negative or unlikeable for whatever reason, but I'm interested to see whether Wu Mei comes back and whether we see some development of her real personality. For me, good scripted television isn't about "good" and "bad" characters; it's about exploring all sides of everyone, and I think Community has done a fair job of that while keeping things pretty loose and silly. Hope to see you again, Michelle! This is Wu Mei's begrudgingly-agreeing-to-a-set-up-date face.

I am falling more and more in love with Suvir with each new episode of Top Chef Masters. Not only do we see love for his shoes and his pants in this episode, but when he's stuck using the deep fryer and lands in the bottom three for his tough veal, he classes up the joint by not pointing fingers at his stove-hogging competitors (can you imagine such a lack of under-the-bus throwing on regular Top Chef?). He's also a self-proclaimed "vegetarian who enjoys cooking meat." Thank GOODNESS. The guy is TV gold, and I expect to not see him in the bottom three again anytime soon. He won't eat it, but he knows how to cook it (not in the fryer)

It was all about family for Floyd, who was stuck updating the truly atrocious Ambrosia Salad for his challenge. Though he didn't know what it was (and was horrified when he learned), he turned the dish into a combination of his wife's mousse (which his kids love), and fresh fruit fondue. The modern twist won Floyd the winning spot this week, getting money for the Young Scientist Cancer Research Fund at Mount Sinai Medical School, where his won Peter volunteers. Go Floyd! Yesss, more meat (not for the ambrosia salad, I assure you)

America's Next Great Restaurant was focused on families this week too, as the contestants had to develop dishes suitable for kids along with toys that would entice them (correct me if I'm wrong, but Chipotle has never given out toys, no?). We got a bit of Sudhir's background: "I don't have kids, much to my mom's terrible sadness. She's going around to all the holy places in India, praying to a thousand gods that I get married." Aww, I bet lotsa ladies have been looking up Sudhir since the show started. He developed an Indian take on a burger, fries, and a milkshake, but he was concerned because he did not envision his restaurant as being for kids. The toy he developed was a coconut with cute spice characters inside, but that wasn't quite enough to overcome the foreignness of the flavors and the "mushy" burger, as described by Bobby Flay's daughter (who is disturbingly mature and self-assured at 14 years old). Sophie Flay's got bangs and articulate critiques for Sudhir

Stephenie also had some struggle this week, although hers was with her concept in general. The judges had words with her chef about whether he understands Stephenie's concept, then Stephenie herself had a little crisis about whether a chain of organic foods is actually sustainable. Instead of offering any kind of advice, the judges scolded her for not believing in her concept, and once again I say I am kind of done with this show being any actual measure or indication of anything constant. Steph won me back with some superadorable photos from her childhood, one with what looks like a pretty rockin' She-Ra cake, and stories about how incredibly shy she was when she was young. She also got the judges on her side with her toy concept of "Pita Pete," a zippered pita-shaped pouch with big eyes that comes with paper veggies inside and crayons to color them. Steve Ells was particularly delighted with the pouch, smiling sincerely for what I swear is the first time in the entire competition. Stephenie's chicken pita also went over well, earning her a safe judgment for this week.

In the bottom three, Sudhir reminded everyone that he did not intend his restaurant for children, which concerned the judges. Curtis even asked him if he was "taking this seriously" when he perceived Sudhir as smiling his way through judging. Luckily, a pair of buffoons who have somehow been dithering their way through the competition finally got the cut, saving Sudhir for now. You gotta work on your pitch, dude!

I can't believe that we're down to the final three on RuPaul's Drag Race -- and Raja and Manila are 2/3 of it! This week the girls had to do some choreography, which bewildered Raja, but they all looked good in their swimsuits during the dance. They also had to make gowns using Ru Dollars; Manila went back to the Imelda Marcos well with a "Steel Butterfly"-inspired gown and sky-high hair that La Toya Jackson called "a little bit too big." GIRL, it's a drag competition. No hair can be too big. Manila used crumpled-up bills to make her dress, pointing out that they're wrinkled "like tips." Clever! Love it, honey. Raja used shredded bills for a couture look that screamed 1390s starlet. This time La Toya commented, "You act as if you own the stage." This time I can agree with you, Miss Jackson.

At the end of the runway show, Ru asked each of the girls why they should stay in the competition. Manila described how she is "the product of a supportive family," which was incredibly sweet. Raja went in a different direction, saying that she wants to "leave a legacy for all the little boys who are teared up, teased, afraid, and don't know they can go against the grain." Well damned if I didn't tear up at that. It was basically the most fabulous "It Gets Better" message ever. Manila took the top prize (second week in a row!), but Raja captured my heart this time, for real. Dare I say I can really see her taking this competition?

One final note is that Paula VanOppen (whom you might recognize from season 6 of So You Think You Can Dance, when she turned down a spot in the top 20 to film Burlesque) is a regular on the new E! reality show The Dance Scene, about choreographer Laurieann Gibson. Paula wasn't in the premiere for too long, but I'm sure we'll be seeing her skillz later on in the season, so check her out!We'll soon find out... 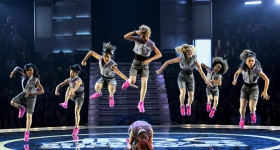