I feel like Glee heard my (and many others') complaints and slunk off for a while, returning last week with an offering of Mike Chang, Tina, and returning guest star Sunshine Corazon (played by popular tiny singer Charice). Hmm. Fine, I'll take it. For now.

The episode started out as it often does, with the glee club facing a problem. So many problems, these kids. This time it was raising enough money to make it to nationals in New York. Mike Chang, of all people, interrupted the pity party in anger. "You guys complain all the time," he correctly noted. Turns out he, Tina, Artie, and Brittany comprise the academic decathalon team the Brainiacs, and they, too, need money to get to their competitions. Mr. Schu questioned membership of the group. "Is it because two of them are Asian and Artie wears glasses?" Nope, he's wondering about the less-than-Mensa Brittany, who turns out to have a wide knowledge of feline diseases. But we're just going to assume that "Asian" and "glasses" still automatically mean "smart?" Ugh, fine. You're testing me again, Glee.

Long story short, the fundraising concert for the glee club was supporting the Brainiacs as well. Tina could get a coveted solo, and Mike, "tired of [his] dancing being overshadowed," could take the stage with some of his sweet Mike Chang moves. Even glee club enemy Sunshine wanted in on the concert, knowing the pain of being an overlooked academic decathalon member at her own school. She proved herself with a showstopping performance of "All By Myself" (watch here) and promised to bring all 600 of her Twitter followers (BTW, real-life Charice has 412,373 Twitter followers as of this writing). Sometimes I forget that Tina's supposed to be Goth.

Of course, in the end Sunshine never showed (payback to Rachel for her earlier sabotage), Tina was booed off the stage by hired hecklers, and Mike Chang ... danced with a broom wearing a robe? Whatever, still hotness. The episode ended with a tidy little donation that perfectly covered the needed expenses (are you serious about winning me back or WHAT, Glee?), and now we sit back and wait for next week's Gaga episode. Gulp?

Over on America's Best Dance Crew, we got the results of the first audience vote of the season. IaMmE, Street Kingdom, and Instant Noodles all got enough votes to make it to next week, while ReQuest landed in the bottom two (what is wrong with America?!). This week the crews had to perform completely random (seriously, they were all over the place) challenges as they danced to songs by the Black Eyed Peas. Here's the breakdown (sorry I don't have links to clips, but you can watch the full ep on the website):

IaMmE had to transform into a machine at some point during their performance. They had one member in the center of a formation while the rest of the crew acted as his "robot" arms. I have to say, I am always so impressed with how the dancers on this show figure out how to represent what seems impossible. D-trix thought it was the perfect challenge for them, Lil' Mama called them the most improved group out of everyone, and JC admired their technique of filming themselves during rehearsal to see how they look on camera. Not glowing reviews, but we'll take it! A shot of the "factory" at IaMmE's opening.

Street Kingdom had to have a futuristic battle with lightsabers (see, random), and they incorporated the props with aplomb. Lil' Mama pointed out that with ten members, they're the biggest group, and their battle just wasn't enough of what she wanted. D-trix seems to think that America is unfamiliar with krumping and wants them to "communicate to people at home the love and brilliance" they have. Instant Noodles had to create a video game, which gave me nostalgic pangs for Poreotix again (they made a video game all the time in their dances, just for the heck of it). JC liked their personality and drew attention to member Chuck Maa, who "doesn't look like a booty shaking kinda guy," but busted out his booty something fierce. D-trix claims that he's "totally on [their] side right now," which I find a bit hard to believe after his harsh words last week. Some very shiny Noodle packaging, there

ReQuest had to fight to stay on the show with their performance that featured "cloning;" they achieved the affect with identical outfits/wigs and lots of coordinated, reflected movement. Lil' Mama pointed out how these ladies have the strength of queens and then listed the adjectives: "electric, sharp, clean, sexy, powerful." They were saved by the judges to continue on the show, so can people please vote for these hotties? How are people not voting for this?

-Manila and Raja are both in the finale of RuPaul's Drag Race! Though I'm also a fan of Alexis Mateo (she seems so sweet!), Raja's pretty much got this one in the bag, no? Full writeup of the finale next week.

-We found out on Top Chef Masters that Suvir was raised by strictly Hindu parents, and thus he cannot willfully kill a living thing. "These hands can cook, but they cannot kill." Seems like it might lead to some tough situations as a chef, not the least of which being the jar of live worms he had to serve for the Quickfire. Gag. He went on to take second place in the Elimination challenge, so let's cast that earlier memory out of our minds. Forever. -In Not Terribly Surprising news, Stephenie got the boot on America's Next Great Restaurant. Her lack of confidence combined with the judges' confusing directives proved too much. Sorry Steph! Hope you figure out another way to get Harvest Sol off the ground. Sudhir made it to the finale, though! He and his idea have been my faves from the start, so fingers are crossed... 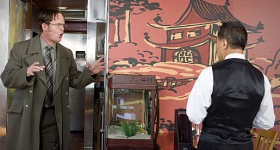 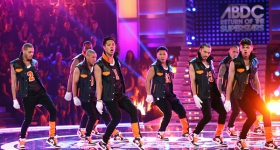