"Dawen is a mixture of Marvin Gaye, Maxwell, and perhaps a touch of John Legend and Robin Thicke" -- a-Tunes.net

Ready, L.A.? For the first time ever, Hyphen is throwing an issue teaser party in your neck of the woods. Little Tokyo will soon play host to our amazing lineup of performers, special guests, surprise appearances, and tons of giveaways. You've been waiting -- now don't miss it!

We're getting tons of great response in the run-up to the event, and we'll be sharing more details of our teaser party as the day draws nearer -- so keep checking here to see who's going to be spinning tunes, creating art, and dropping rhymes for you at Chop Suey on May 7.

One performer that we're sure you'll love as much as we do (if you don't already love him) is Dawen -- a singer-songwriter whose sweet and smooth R&B can make even Macy Gray blush (when he covered her song "I Try" last year, she raved, "That was awesome! My face flushed!").

Though he only started seriously pursuing his music career in 2007, Dawen's already garnered attention for both his soulful vocal range (think Maxwell, D'Angelo and Erykah Badu) and his earnest lyrics, which cover everything from Asian American identity politics to personal relationships. You'll hear it in songs like the jazz-influenced "Ku Li" and in "Wake Up," in which he tackles racial stereotypes head on. "I think one of the things that people of color, minorities in America face everyday is struggling with self-definition," Dawen told us in a 2009 interview. "We're constantly being defined by people who don't represent who we are."

Born in Boston, Dawen's family later moved to Hong Kong, where he attended high school. He began writing his own music in Chicago, while studying classical music in college. Since then, he’s released his current album, American Me, which received a flush of critical reviews from sites like a-Tunes.net and MTV Iggy.

Once his tour wraps, Dawen will focus on finishing his new album. But fans who are anticipating his sophomore release will be in for an amazing treat at our event. "I’ll be performing a new song I've been working on. It's going to be a change of tone in my music … a celebration of my heritage,” he says, smiling. “Good times.”

For more Hyphen coverage of Dawen, check out his favorite Asian American songs of 2010, and a Q&A we did with him in 2009, where he discusses how his identity informs his music. And check out this "Glee"-worthy cover of Bruno Mars' "Just the Way You Are": 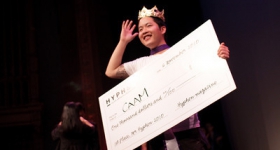