Jason Shiga’s graphic novel Empire State: A Love Story (Or Not) is awash in mid-twenties angst and earnest self-doubt as its leading man Jimmy Yee embarks on a cross-country trip to "see about a girl."

But love is not always linear. The present-day narrative shows us frames colored in hues of blue, of Jimmy boarding a Greyhound bound for New York City, while the pages in red show flashbacks to meaningful times that Jimmy shared with his best friend Sara, and the loneliness he felt once she left.

In this way, Empire State breaks up and plays with the familiar rom-com story arc with scenes of meandering yet insightful conversations. The heightening layers of visual narratives engage the brain while the heart is busy cheering for Jimmy. It’s a breezy read that cuts deepest in its honest admissions that we’re all just fakin’ it ‘til we -- well, you know -- supposedly, make it.

Jimmy is a web designer who works at the library, an Oakland devotee with homebody tendencies. He’s a thinker, dreamer and artist at heart (“You ever think about all the different places this book has been?” Co-worker’s response: “Not really, bro.”), but doesn’t have a bank account and can’t tell the difference between a latte and a cappuccino. He’s into hard sci-fi, but his romantic notions about life and love are modeled around the high standards of TV and movies, namely Sleepless in Seattle. Text and illustrations © 2011 by Jason Shiga

After hard reality hits Jimmy’s formerly romanticized road trip, here comes another scratch in the record: Jimmy arrives in New York to find that he may have missed his chance with Sara. Her über-hip new boyfriend can take him to school on HTML code as well as Chinese cultural history, and he actually seems pretty nice.

Will Jimmy win her back? Will love prevail? Ultimately, it doesn’t really matter, for the ambiguity and hesitancy of life at his age is the real takeaway of the book. “You know, it’s pretty normal to be grown up but not feel grown up,” says Sara during a flashback walk around Lake Merritt.

Empire State is well-crafted and evenly paced, with a subtle and geeky humor that captures the realistic musings of a guy in his twenties still figuring out who he is and what he’s supposed to be doing:

You remember how in the first two Star Wars movies Luke is this bratty little kid. But then you see him in Jedi and he’s a total badass … I always assumed that’s what becoming an adult would be like. I’d go off to some college on the East Coast for four years and then return knowing everything there is to know about the world … I dunno. It’s like I’m an imposter. I moved out of my parent’s house two years ago, but I still haven’t worked out all the stuff it seems every adult on the planet already knows.

The dialogue is natural, from discussions of online dating, diatribes against hipsters, speculations on job interviews for Google, amusing references to Kate and Leopold and Star Wars, with other more obscure shout-outs to peach looza, Fermi estimations, and Eustace Tilley. Text and illustrations © 2011 by Jason Shiga

Shiga zig-zags his frames on the page in unconventional arrangements, leaving pockets of white space which evoke the feeling that there’s something missing in life. Full-page illustrations and spreads of cityscapes induce moments of contemplation and reflection. Shiga’s line-strokes are rough, and the characters are drawn plump and hunched over, conveying an appropriate lack of confidence and apathy, but inviting empathy and endearment.

The varied color schemes used throughout the book strategically guide the reader toward an implicit resolution to the story. For example, partial shading of the library building in blue during a flashback scene in red suggests to the reader that Jimmy goes back to working at the library upon his return from New York City. Such subtle details are not necessary to catch in order to enjoy the book, but certainly enhance it, and are worthy of high appreciation. Shiga’s style, known for incorporating puzzles and mysteries into his narrative style with wit and humor, is alive and well in Empire State.

All in all, the graphic novel’s state of mind is concerned with love and friendship, the vulnerability in growing up, and trying to hold on to the people you truly connect with, who understand you at your most existential. 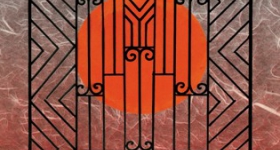