Photo by An Rong Xu

In honor of Asian Pacific American Heritage Month, Hyphen will present throughout May a series of profiles on unsung heroes of our community.

A bit of background on the month, courtesy of the government’s website on Asian-Pacific American Heritage Month:

In June 1977, Reps. Frank Horton of New York and Norman Y. Mineta of California introduced a House resolution that called upon the president to proclaim the first ten days of May as Asian-Pacific Heritage Week. The following month, senators Daniel Inouye and Spark Matsunaga introduced a similar bill in the Senate. Both were passed. On October 5, 1978, President Jimmy Carter signed a Joint Resolution designating the annual celebration. Twelve years later, President George H.W. Bush signed an extension making the week-long celebration into a month-long celebration. In 1992, the official designation of May as Asian-Pacific American Heritage Month was signed into law.

The month of May was chosen to commemorate the immigration of the first Japanese to the United States on May 7, 1843, and to mark the anniversary of the completion of the transcontinental railroad on May 10, 1869. The majority of the workers who laid the tracks were Chinese immigrants.

Over the course of the month, we hope to salute some of the leaders of our community as well as introduce you to some new faces. We will post a new profile every Wednesday and Friday, so keep checking back!

We kick off the series with a snapshot of the inimitable photographer Corky Lee. Check out a slideshow of Lee’s work put together by Visualizasian.com:

You may not recognize his face, but you certainly know his work. Corky Lee’s award-winning photographs -- which catalyzed as much as documented the burgeoning Asian American movement of the early 1970s -- have appeared in the likes of Time magazine and The New York Times, as well as a bevy of Asian American media. A community organizer turned photojournalist, Lee has always aimed to capture both the everyday experiences and the extraordinary struggles of Asian Americans -- illuminating realities that are passed over daily by mainstream storytellers. “It’s an art of persuasion,” he says of his photographs. “It is documentary and history. And sometimes, photography is a form of propaganda.” Case in point: Lee’s stunning 1975 photo of a bloodied Chinese American man being hauled away by the New York Police Department moved 20,000 people to march against police brutality on the very day it was published in the New York Post. Such is also the impact of Lee’s work on the people he has spent his life recording: potent, immediate and at times overwhelming. Lee not only credits the community (and its independent media) for much of his success but also insists that the best advice he can give to younger artists is to learn their Asian American history.  -Judy Lei 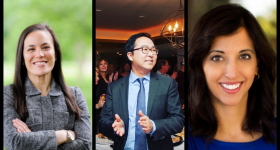 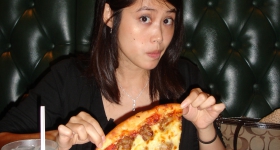