SKIM drops beats, rhymes, and soul to spare at our Bittersweet Issue teaser party in L.A.

We're getting tons of great responses in the run-up to the event, and we'll be sharing more details of our teaser party as the day draws nearer -- so keep checking here to see who’s going to be spinning tunes, creating art, and dropping rhymes for you at Chop Suey on May 7.

The musician SKIM defies convention -- known as "a singing, rapping, Korean American tomboy," she has the ability to blend elements of hip-hop, rap, folk, soul and spoken word into one heady sonic assault with songs that will have you singing along in no time.

SKIM's soulful sounds are as beautiful as her raps are incisive. Armed with a guitar and her vocals, or with beats and rhymes, SKIM's versatility will leave you wanting more. Think Lauryn Hill meets Meshell Ndegeocello and Tupac with a distinctive soul sound for the 21st century, and you'll get some idea of how contagious her music is. But you've really got to hear and see her live in order to fully appreciate her serious chops.

Born Sarah Kim, the musician was nicknamed "SKIM" in high school, and the name stuck. Growing up in Queens, New York, SKIM's musical interests were a "kaleidoscope … gospel music, hymns, classical music, and then the Fugees, Tupac, Depeche Mode, Sade -- just a range [of music]." SKIM also found her groove in hip-hop, folk, and soul, and these influences would develop into the dynamic musical persona she's known for today.

Although SKIM described herself as a "very shy" performer initially, as soon as she realized the power of her voice and lyrics on stage, she couldn't stop. "It was such a positive, creative energy that just naturally flowed in me [on stage]," she says. Music and spoken word also serve as the vehicle for expressing her identity. "On the first CD, there was a mix of a lot of social issues, political concerns that affected my personal life," she says. "There is a lot that I would like to get off my chest."

And SKIM has big plans to impress listeners at our Bittersweet issue teaser party in L.A. "I’m excited about what is going to happen," she says.

It's one performance you won't want to miss, guaranteed. 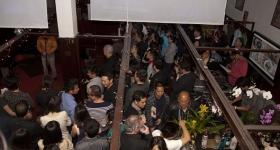