I am quite familiar with processed meats. There’s no punch line to that opener; I’m just being honest about what I know. And apparently, I’m not alone. A recent Hyphen Facebook post linking to the Multi-American blog’s celebration of SPAM musubi brought all sorts of “likes” and “comments” to the virtual yard, signifying how ingrained the canned meat is to many Asian American lives and bellies.

My childhood was chock-full of nitrates, sodium, and an amalgam of four-legged animals chopped and cured into uniform cuts of salty goodness that was inexpensive, easy to heat, and lasted for damn near forever -- key to a family of five with immigrant parents who were struggling financially. Sliced hot dogs were thrown into kim bap and a delightful dish (whose name escapes me) which features potatoes, onions, soy sauce and sesame oil. Vienna sausages weren't my favorite, but they would do in a pinch despite their uncanny resemblance to amputated fingers. And then ... there was Spam. Sure, the pink sheen and sliminess found in every rectangular can was off-putting at first but our appetites always returned with a vengeance once the Spam was thrown onto a heat source: dipped in battered egg and fried in a pan, cubed and tossed into kimchee jjigae and kimchee fried rice, or nestled between toast and a fried egg.

Please, excuse the melodramatic overtones of my nostalgia about this particular processed meat, but I have an explanation. From roughly sixth grade to age 23, I had to eat my Spam in private.

I suffered from class-based Spam shame.

We grew up in the Midwest where Asian faces weren't in abundance and our supposed weirdo Oriental ways in regards to language, customs, and food were already conspicuous enough. To throw in a hearty love for a meat that had become synonymous with poverty or "trashiness" in American pop culture would be making that bullseye even brighter on a young lass like me, who was preoccupied with cultural assimilation. Articles have often remarked on the influence of Spam abroad, particularly in Asia and the Pacific Islands, often in contrast to how the luncheon meat is regarded as substandard or comedic fodder by the average American (or Briton, if you count Monty Python’s legendary Spam sketch from which the term “spamming” for junk e-mail was born). Only in the recent economic downturn and rising food prices did the focus shift to America’s Spam consumption as a whole -- rather than as kooky culinary statistics of foreign countries or ethnic groups -- as sales for the oft-maligned meat surged. Others have touched on the stigma surrounding Spam, including guest blogger Dr. Sangyoub Park at Sociological Images, who argues that though Americans may perceive Spam’s prestige in Korea (and, ostensibly, other parts of the world) to be weird, a Korean perspective finds that it is “perfectly sensible … and with boiled rice and kim-chi, totally delicious.”

That deliciousness was something I would deny in my early years in my predominantly white, middle class suburb, where -- in addition to self-imposing my own version of Don’t Ask, Don’t Tell policy on discussing my Korean heritage -- you would have had to hold me at gunpoint for me to admit publicly that I 1) ate Spam and 2) really, fracking enjoyed eating Spam.

You could say that my yen for Spam was inherited. My mother, born in South Korea very shortly before the 1953 armistice which halted the hostilities of the Korean War, recalls Spam -- along with cheese, M&M’s, coffee and other food items brought to Korea to feed the US military -- as delicacies for a nation whose land and economy had been razed during the war. American food was not imported for resale, so my mother’s family and neighbors bought it illegally, typically through Korean women who had married and were living with American soldiers in town. A popular dish arose from the influx of western military cuisine: budae jjigae, or “army base stew”, a hodgepodge of processed meats, vegetables, and whatever else happened to be available. (An urban legend floated around that cigarette butts were even added to the pot). Growing up in a war-torn, US-occupied country was no direct comparison to raising a family in 1980s Columbus, OH, but some commonalities existed: lack of income and resources, uneasy cultural interactions with Americans, and the often uncomfortable notions of what it meant to feel “at home.” And waiting in our family pantry was always a can of Spam, a mainstay throughout the economic highs and lows in the Kim household. But the fact that Spam was cheap was simply a bonus. We would have eaten it, gladly, in any financial situation: it had become a part of our family’s culinary culture.

In 2010’s Asian American/Asian Research Institute (AAARI) Summer Series, Robert Ji-song Ku, Visiting Professor in the Department of Asian and Asian American Studies at SUNY Binghamton and self-professed lover of Spam, spoke of the meat and other foodstuffs in the context of his manuscript Dubious Gastronomy: The Cultural Politics of Eating Asian in the USA.

“Due to their long entangled history with the US military, these two places [South Korea and Hawaii] along with Guam lead the world in per capita consumption of the pink gelatinous pork. Immediately following World War II, the American GIs stationed in Asia and the Pacific curried favor with the impoverished natives by handing out such luxuries as chocolate, cigarettes and Spam which as part of the US Army's monotonous C-Ration was an object of scorn and mockery by most of the rank and file. Here in the US, Spam is widely regarded as vulgar, farcical and an affront to the very idea of real or whole food. To millions of devotees in and across the Pacific Ocean however, Spam is not only an essential part of the local indigenous cuisine, but a luxury commodity as well.”

I didn’t know it then, and perhaps it would have been futile to try to explain it to my peers, but my Spam consumption was largely the result of American military and political expansion abroad. I grew to love a food that was championed as a symbol of American ingenuity despite being denigrated by Americans themselves. I eat Spam and am judged for eating Spam because of America. Both Asian Pacific Americans and Spam were the butt of a cruel joke: Please value what we deem subpar and make us money in the process. It’s a terribly heavy load of symbolism to place on a pink block of meat.

But Hormel Foods, the makers of Spam, pride themselves on their history of feeding the US military. In a press release promoting their scholarship fund for the children of military families, the company states: “Hormel Foods support of the military dates back to World War II, when more than 100 million pounds of SPAM® luncheon meat were shipped abroad to feed Allied troops. Canned meat became of particular importance during the war … its savory, salty-sweet flavor continues to be enjoyed today by the military as well as SPAM™ lovers around the world.”

In a subsection of their company profile entitled “Going Global,” Hormel states: “The changing economy of Eastern Europe and the advancement of Third World nations combined with exploding communications capabilities have driven our holding of minority interests in several entities operating in international markets,” listing enterprises and joint ventures in Madrid, Manila, Okinawa, Shanghai, and Beijing.

Written between the lines of Hormel’s history of military support and their broadening reach in a global market is the understanding that the former has allowed for the latter. There is no outward acknowledgement of the fact that the nations who cherish and consume Spam the most are also the ones who have been occupied and/or annexed by the US and are still home to American military bases today. From the corporation’s standpoint, they just make one helluva meat product. The love of Spam -- and the billions in profits from that love, to date -- owes much to US imperialism and expansionism abroad. However, for many immigrants in the US and their brethren in their respective motherlands, Spam is Spam whether it’s a being given as a homecoming gift in the Philippines or stocked as currency in Tahiti.

For the generations of Asian Pacific Americans who descend from these folks, perhaps it is our job to assume a more critical perspective on the seemingly innocuous meat and connect the dots between it and its reverence in Asian, Pacific, and Asian Pacific American communities. That is not to say that we should be ashamed of our enjoyment of Spam. Nor can we re-write history to prevent or abate our love of Spam (would we want to?). But perhaps arming ourselves with some knowledge -- as well as with our forks, spoons, chopsticks, or hands -- before entering that global food discussion which is increasingly taking up a larger slice of the cultural/media pie (my sincerest apologies for the pie pun...), will help unearth the politics behind everyone’s favorite life-sustaining activity.

And as Asian Pacific American and other ethnic cuisines continue to influence how the US eats -- and as those cuisines are commodified by others -- the steadfast stigma against Spam, pork rinds (mmm, chicharrones …) and other supposedly “untouchable” or "tacky" foods by American standards already seem to be weakening. Asian Pacific Americans may be left asking the question, “So, what, now everyone thinks it’s cool to eat Spam?”  But of course, the issue goes beyond what is and what is not culturally fashionable. As Ku states, “With every bite of Spam I consume layers of overlapping histories, migrations, and cultural transformations. With it I consume calamitous political turmoil, bloody military conflicts and other upheavals that shape much of the 21st century.”

As for me, I gradually cast off the onerous chains of Spam shame throughout my early twenties. My tipping point came when I moved to the San Francisco bay area, one the largest concentrations of APAs in the country and where Spam musubi is rolled and devoured freely. Histrionics aside, food is a form of identity and to have that identity stifled in the name of racial, cultural or class assimilation is pure bollocks. To paraphrase Dave Chappelle’s classic stand-up bit on the racialized love connection between African Americans and fried chicken (a stereotype also fraught with history, born out of American slavery): “If you don’t like Spam, then there’s something wrong with you.” 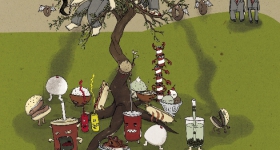 Frances Kai-Hwa Wang wrote on Mon, 06/13/2011 - 9:34am
Great article. We love Spam Musubi and have trouble explaining it too! "COLUMN: Pondering picnic food - 'normal' and not - and its power to bring us together" by Frances Kai-Hwa Wang at annarbor.com http://annarbor.com/passions-pursuits/what-is-normal-picnic-food-what-do...