Leilani Ly-Huong Nguyen was one of the moms featured in our story on postpartum traditions.

I'm excited to share a video, Motherhood Rooted, as an accompanying piece to the story I wrote about traditional Asian and Pacific Islander postpartum practices.

Motherhood Rooted, the video, is a collaborative effort between the Center for Asian American Media's producer R.J. Lozada and myself. The project was developed to support content for Cinema Asian America, an on-demand channel on the Comcast network (curated by former San Francisco International Film Festival Director Chi-hui Yang).

Some words from R.J. Lozada about the collaboration:

In an effort to diversify and expand audiences, I tapped Hyphen's publisher (now former publisher) Lisa Lee, and pitched the idea of pooling resources and working together. I revealed the different themes that Cinema Asian America was projecting, one being Family Matters, and Lee provided a listing of Hyphen stories in the works (enter Momo Chang). Lightning struck, and this alternative cut (the original version aired in April 2011) makes room for additional insight highlighted in the article. Oh, and there are some really adorable children in them as well. Enjoy.

For the video, R.J. interviewed one of the moms in the story, Lisa Juachon. I also enlisted two friends, Ly Nguyen (no relation to Leilani Ly-Huong Nguyen, who's in the story) and Lily Wang, who all graciously shared their stories on camera.

Reporting on postpartum practices for Motherhood Rooted has been one of the more fun writing assignments I've had. I originally came up with the idea when I learned about these traditions after giving birth to my first child, and was overwhelmed with how powerful these traditions can be.

While researching for the story, I was struck by a few things:

- Many cultures -- including Latin, indigenous, Arab and numerous others -- practice some sort of postpartum tradition. I was surprised at how similar, say, Asian traditions are to indigenous practices. A lot of the practices have the same idea behind them: take care of the new mother and baby, keep the mother warm, and feed her nutritious foods. Despite how widespread these practices are, these traditions are not something you learn by reading pregnancy books.

- Motherhood is not something highly valued in our society today. There are many intangible ways to describe this, but let's just look at some of the facts: there's no guaranteed paid maternity and parental leave in the US, compared to countries that have up to three years of partially paid parental leave! Here, domestic work is also among the lowest paid careers, though there is a movement to ensure that domestic workers are treated more fairly.

- There's a lack of postpartum care for new moms under our current healthcare system. Once you've given birth in a hospital, a doctor typically doesn't see the mom until about six weeks postpartum, which is how long it takes to heal after giving birth. What happens within those six weeks is crucial in determining how well a new mom heals, yet all of the care is left up to the individuals and families. Moms that lack the resources, and familial and community support, don't get the care -- and pampering -- that they probably should be receiving.

- So, so many women -- and men -- that I reached out to while looking for ideas and sources for the story were super-enthusiastic and helpful. I think as Asian and Pacific Islanders, either as immigrants or multi-generations in the United States, much of our culture has been forgotten or erased. I am thankful that so many people gave me tips on practices and rituals, or connected me to other moms they knew -- and of course, to the moms/families who were interviewed for the story and video. And also thanks to David Cohn from Spot.Us and to all the donors for helping us launch our successful funding campaign in order for me to work on this story.

To touch on my personal experience with these practices: I'll just say that I didn't follow the traditions very well after my first child was born. We had visitors in the hospital and at our apartment immediately after I was released. I remember coming back from the hospital in my bathrobe, totally disoriented and sore, and feeling like I couldn't even speak a complete sentence. After my daughter was born, I kept to the traditions pretty closely; my mother made all healthy meals for me, and we didn't have visitors until after the first month. I didn't go outside until the third week, and it was a walk to the park down the street. Emerging from our place was like going outside after hibernating in a cave. One of my friends, Lily Wang, who's in the video, aptly described it to me once: upon emerging from her house after being homebound for a month, she thought the sun felt so weird on her skin, was terrified of the world, and wanted to crawl back in her pajamas and live in oily/nappy hair all day.

I also learned that it's not about following the traditions to a tee. There's no recipe for postpartum practices. Even if you could read about it in a book, it's really about the relationships that are formed or re-formed through doing, not by reading about it. You have to adapt some of it to your lifestyle. There are already enough stresses from pregnancy and birth and being new parents.

What's important is to understand the general idea behind the practices, like eating high protein, nutritious foods, foods that also help you produce milk (if you breastfeed -- such as oatmeal, papaya, pig's feet, peanuts and oxtail soup) and keeping your body warm. Also, it's important to get rest while also having time to bond with your baby. One month is not a very long time in the grand scheme of things, so if you are able to practice the tradition of staying indoors, cherish it, because very soon, you and your baby will be exposed to the wide, open world. 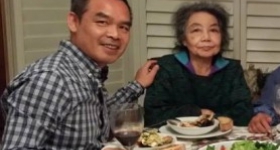