Virtually every hard-charging candidate on the far right during the 2010 midterm election campaign took a moment to trash a Muslim, a mosque, or Islamic pieties. But as the 2012 campaign ramps up, a look back offers quite an unexpected picture of the American electorate’s behavior.

In state after state, candidates who traded on illusory Muslim “threats,” tied ordinary American Muslims to terrorists and radicals, or characterized mosques as symbols of Islamic triumphalism, went down to defeat. Far from winning votes, “Muslim-bashing” may have alienated large swaths of the electorate -- even as it hardened an already hard core on the right.

Anti-Muslim rhetoric rose in 2010 with the emergence that July of a “mosque” controversy in lower Manhattan. New York Republican gubernatorial candidate Rick Lazio, facing indifference to his candidacy in the primary race, took up what rightwing anti-Muslim bloggers had dubbed “the Mosque at Ground Zero,” although the planned cultural center in question would not have been a mosque and was not at Ground Zero.

Lazio demanded that Democratic gubernatorial candidate Andrew Cuomo, then state attorney general, “investigate” the mosque, implied that its leaders had ties to Hamas and that the building would somehow represent a threat to the “personal security and safety” of city residents.

As a fog of acrid rhetoric enshrouded the campaign, Tea Party-backed Carl Paladino, a Buffalo businessman, beat the hapless Lazio in the primary and was then handily dispatched by Cuomo in the general election. Cuomo had not joined the Muslim bashing, while by the end of the race, dozens of major political figures and potential Republican presidential candidates had denounced the Mosque at Ground Zero and sometimes the whole of Islam.

The election results showed one incontrovertible fact. Both Lazio and Paladino invested heavily in demonizing Muslims, but went down to dismal defeats. Nor could these defeats be passed off as expected results in a relatively liberal northeastern state.

Take Tennessee, which was in the throes of its own mosque-building controversy (in Murfreesboro) at the height of the 2010 campaign. There, gubernatorial candidate Ron Ramsey lost in the Republican primary, attracting only 22 percent of the vote despite raising $2.7 million. During the campaign, Republican victor Bill Haslam, now governor, simply stated that decisions about mosques and religious construction projects should be governed by local zoning ordinances and the Constitution.

In another 2010 Tennessee race, Lou Ann Zelenik, a Tennessee Republican congressional candidate and Tea Party activist, relentlessly denounced the Murfreesboro mosque plans. As she typically put the matter, “Until the American Muslim community finds it in their hearts to separate themselves from their evil, radical counterparts, to condemn those who want to destroy our civilization and will fight against them, we are not obligated to open our society to any of them.”

It didn’t work. Zelenik, too, was defeated, attracting 30 percent of the vote in a three-way primary race. The winner, state senator Diane Black, edged her out with 31 percent. Black declined to denounce the Murfreesboro mosque project and went on to win the general election.

Not all candidates who bad-mouthed Muslims failed, of course.

Republican Rick Scott, running for governor in Florida, featured a deceptive television ad that referred to the New York project as “Obama’s mosque,” seamlessly fusing Islam, terrorism, and murder. The Tea Party favorite, however, had a slight advantage: He poured a staggering $73 million of his own money into the race in which he largely painted Obama as an anti-business incompetent. Despite lavishing more personal cash on the race than any candidate in Florida history, Scott won by fewer than 100,000 votes and became only the second Florida governor to take office without the backing of a majority of the electorate.

And if some virulent political rhetoric was credited with bringing victory to candidates at the time, its effect in retrospect looks more questionable and less impressive. Take the victorious campaign of Republican Allen West for Florida’s 22nd Congressional District. A Tea Party favorite, he was also a veteran of the Iraq War and had been fined by the Army for the beating and threatened killing of an Iraqi prisoner.

During the campaign, he made numerous statements linking Islam with terrorism and weighed in loudly on the proposed Manhattan Islamic center. In an open letter to his opponent, two-term incumbent Democrat Ron Klein, he noted, “The mosque symbolizes a clear victory in the eyes of those who brought down the twin towers.” Klein later caved, claiming that Ground Zero should only be “a living memorial where all Americans can honor those who were killed on September 11, 2001.”

Reversing the results of his 2008 race against Klein, West’s victory has since been seen as a triumph of anti-Muslim trash talking. A look at the numbers, however, tells a different story. Much of West’s funding of more than $4 million came from out-of-state donors and conservative PACs. For all that money, however, West won by not “losing” as many votes as Klein did (when compared with 2008). In 2010, West won with about 18,000 more votes Klein; in 2008, when Klein had the funding advantage and a presidential year electorate at his back, he beat West by 29,000.

Off-year elections normally mean lower turnouts, which clearly worked to West’s advantage. His victory total amounted to about a third of the 2008 total vote. And there’s the point. The motivated, far-right base of the Republican Party/Tea Party can, at best, pull in about a quarter to a third of the larger electorate. In addition, West became the “definer”: He blocked out the issues, agitated his base, and got people to the polls. Did anti-Muslim rhetoric help? Probably. Can it work in a presidential election year when substantial turnout ensures that the base won’t rule? Unlikely.

Nevertheless, candidates on the right are already ramping up the rhetoric for 2012. Herman Cain, the pizza king would-be president, is but one obvious example. He says he may not know much, but one thing he knows for sure: When he’s elected, no Muslims will find their way into his administration.

As he put it in an interview with Christianity Today, “Based upon the little knowledge that I have of the Muslim religion, you know, they have an objective to convert all infidels or kill them.” Cain told the website Think Progress that he’d brook no Muslim cabinet members or judges because “there is this creeping attempt, there’s this attempt to gradually ease Sharia law and the Muslim faith into our government. It does not belong in our government.”

During a national television audience at a recent Republican presidential debate, however, Cain insisted that he really didn’t say what he said. He reassured television viewers that he would only bar disloyal Muslims, the ones “trying to kill us.”

Then there’s Lawyer Lynne Torgerson in Minnesota. In 2010, she decided to take on Keith Ellison, the first Muslim member of Congress, pounding him relentlessly for his supposed “ties” to “radical Islamism.”

“And what do I know of Islam?” she wrote on the “issues” page of her 2010 campaign website. “Well, I know of 911.” Alas for Torgerson, the strategy didn’t work out so well. Ellison crushed her. She garnered only 3 percent of the vote.

Now, Torgerson is back, her message even more extreme. Ellison is no longer simply tied to “radical Islamism,” whatever that may be; he has apparently used his time in Congress to become a “radical Islamist” pushing, she claims, nothing less than the adoption of “Islamic Sharia law.”

Sharia has become 2012’s Mosque at Ground Zero, with about 20 states mulling laws that would ban its use. Candidates are shrilly denouncing it -- a convenient way to keep alive nonexistent, yet anxiety-producing, “threats.” So be prepared to hear a lot about “Sharia” between now and November 2012.

The Islamophobic machinery fueled by large rightwing foundations, PACs, individuals and business interests will continue to depict a virtual reality in which Muslim and Islamic “threats” lurk around every American corner and behind every door. But bear in mind that, as the 2010 election results made clear, that only a distinct and small American minority embraces that virtual reality. For at least 70 percent of the electorate, facts do matter.

Attacks on the Sharia boogey, the puffing up of Muslim plots against America, and the smearing of candidates who refuse to make blanket denunciations of “Islamism” are sure to be loud in the 2012 election season. Such rhetoric, however, may prove even less potent at the polls than its relatively impotent first-time around in 2010.

Stephan Salisbury is cultural writer for the Philadelphia Inquirer and a TomDispatch regular. His most recent book is Mohamed’s Ghosts: An American Story of Love and Fear in the Homeland. To listen to Timothy MacBain’s latest TomCast audio interview in which Salisbury discusses the changing feelings of Americans regarding Muslims and Islam in the context of the 2012 election, click here, or download it to your iPod here. 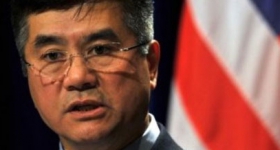