The Department of Homeland Security Sued over Unlawful Detentions

On August 11, 2011, The National Immigrant Justice Center (NIJC) filed a lawsuit against the Department of Homeland Security (DHS) for unlawfully detaining individuals when there's no evidence of illegal activities, under its Secure Communities Program.

This program requires police to submit fingerprints to immigration officials, who can then issue a detainer, requesting police to keep an individual in custody for up to 48 hours, pending possible deportation. There were over 200,000 detainers issued in both 2009 and 2010.

NIJC's lawsuit alleges that through the Secure Communities Program, the DHS is violating the Fourth and Fifth amendments, which guard against unreasonable seizures and abuse of government authority in legal procedure. The DHS, they claim, "fails to establish probable cause before issuing the detainers, does not notify individuals that detainers have been issued against them, and provides no means by which individuals can challenge their extended detention".

The Secure Communities Program's stated goal is to identify and deport convicted felons. But according to the NIJC, 80% of those deported in Illinois are immigrants with no major criminal record. And while the immigration detainers are most often used against recent immigrants (of which almost a quarter come from Asia), they have also been used to target minority US citizens. One such was Jose Jimenez Moreno, one of the plaintiffs of the NIJC lawsuit, who was initially arrested on a drug charge, then prevented from getting out on bail.

Furthermore, this program also makes immigrants less likely to assist the police out of fear that they might be deported.

According to Chris Newman, legal director of the National Day Laborer Organizing Network, "The Secure Communities program is a catastrophe. It has entangled local police... to the detriment of civil rights. Frankly, it has been leading to the 'Arizonafication' of the country." 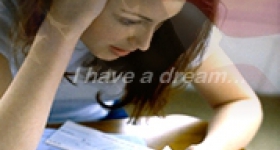 LTE wrote on Mon, 08/29/2011 - 5:12pm
Once again Hyphen allows itself to become a conduit of misinformation by publishing an article that hides the fact the people who are being deported are here illegally. . Arizonification of America is taking place because of the legitimate resentment by American citizens to people who ignored our laws. Americans resent having these illegals dumped in their laps by industry and then given the expense of taking care of these illegals. Americans resent they're expected to follow the law while illegals deserve to be given a pass. . Regardless of it's political/social tilt, Hyphen should allow only postings of integrity, not emotionally driven propaganda represented by a "news" article like this.. . Arizonification will stop when these pro illegal groups stop blurring legal with illegal immigration, present their case with honesty accepting many Americans deeply resent the illegal "immigrants" who took it upon themselves to skirt our laws.