The Hyphen Lowdown is a bi-monthly Q&A series profiling the influential and interesting, from actors, musicians, to politicians -- maybe even someone in your neighborhood! This week, Hyphen blog columnist Cynthia Brothers chats with the rap/punk group The Notorious MSG.

In the lower level of Wo Hop Restaurant in Manhattan’s Chinatown, I sat down with Hong Kong Fever, Down-Lo Mein, and Hunan Bomb, the trio that make up The Notorious MSG, aka The Original Chinatown Bad Boys. Fresh off the release of their debut full-length album Heavy Ghetto and a performance in Toronto, the group -- well-known for their muscular, well-coiffed, leather-clad style -- went beyond surface appearances by delving into the philosophy and politics that drive the music, their artistic influences, and even a little fantasizing about celebrity collaborations.

Let’s talk about The Notorious MSG’s evolving role in the landscape of Asian American music.

HKF: This band is both a statement and a reaction to the negative stereotypes about Asians we see in the media. These stereotypes are a social construct, and we feel like they need to be challenged. Just because the media marginalizes Chinese restaurant workers doesn't mean that Asians should consciously distance themselves from such a real part of their culture and history in America. What about those people who actually do work in a Chinese restaurant? Should they be embarrassed? The MSG wants to bring all Asians into the spotlight, because by doing so it makes a statement that you don’t have to look like Justin Bieber or sound like Alicia Keys to have your voice heard.

We don’t want to go on stage and preach about Asian male empowerment or how immigrants are marginalized in America but we do hope that the audience will reach its own conclusions and feel empowered as a result of what we do. This band is deceptively simple on the surface. We're like a Trojan horse. Full of angry Chinese waiters. Going up your ass.

Have you encountered people that have accused you of reinforcing stereotypes?

HKF: Years ago, we were at a record release party at some club and a lot of girls there wanted to take pictures with us. MC Jin was also in the house and he approached us and said: “No disrespect, but you guys take Asian people back 50 years." No disrespect, but I think he was pissed that no girls were interested in his fat little Hobbit ass.

DLM: I think I saw Gandalf there too.

HKF: I don't necessarily blame him for that reaction. The media continues to bombard us with these negative, one-dimensional stereotypes. But it's gotten to the point where Asians no longer feel secure with themselves unless they are projecting this complete, pre-packaged Westernized ideal. Anything that falls outside of that is met with scrutiny. But truth be told, this is a real part of our culture and it’s not going to go away by sweeping it under the Oriental rug.

On the Heavy Ghetto album, you have both explicitly political songs like “Hell Up in Hong Kong,” as well as more playful tracks like “Chinese Jeans.”

HKF: The MSG style is a precise balance of comedy and rage; those two elements are the foundation for this band. If it was all comedy it would be Charlie Chan; if it was all rage, it would be Bruce Lee. We want to be ... Charlie Lee.

DLM: We want to make music that’s fulfilling to us creatively, so not all of the songs are going to have a serious message behind them.

HKF: People get so caught up in the act that I don't think they realize that we are trained musicians first. We write our own beats, we can all play instruments and we tour with a powerhouse band. We didn’t just start out yesterday.

Even Public Enemy had Flava Flav, the Hype Man.

HKF: Yes, and we have three 3 Flavs. I really can't control what people think, and creatively if we worry too much about that, we start to censor ourselves and it becomes less honest. I don’t see progress made by copying someone else -- progress is made by going beyond your comfort zone and into some difficult territory. Ironically, it puts us in a similar situation as the immigrants here in the US -- we feel just as displaced in the music scene as immigrants do in America. We don’t fit in and aren’t openly embraced in any type of scene. We’re always kind of on our own and that’s how we’ve always been. But maybe that’s a good thing.

What about your positive creative influences?

HKF: I really like Devo -- they were a big influence. A lot of people didn’t understand them or saw them as a pop novelty band because of the outfits and everything, but they had the same undercurrent of discontent and they were making a statement with their music and lyrics, just a lot of people were too dumb to realize it.

DLM: For me, bands like Queen and Freddie Mercury … they didn’t create any barriers for themselves musically, visually, and performance-wise. They were pushing and firing on all cylinders, creating a high standard and doing something original at the same time.

HB: I’m a drummer, so I feel music on a very gut level. When I first joined the band I was the drummer. My influences include everything from old Latin salsa, the Fania Records label, and the Harlem Nuyorican scene in the '70s … but also bands like Motörhead.

How has the makeup of your fan base evolved?

DLM: In the early years, The MSG came to life as a sort-of "inside joke" among Asians. But as we developed our sound and style, our appeal broadened. We’ve brought in people from all walks of life and we love it. There’s even a YouTube video of a white guy who definitely doesn’t fit the [image]. of a typical MSG fan rocking out to “Chinatown Hustler.”

HKF: We want to encourage people to break out of this template that the media tries to impose on us when it comes to entertainment. We don’t need another Black Eyed Peas. We don’t want to write an album of "wall-to-wall club bangers." The heart and soul of this band is rebellion; doing things in a different way.

Any advice to other aspiring musicians?

DLM: You definitely don’t want to alienate your community, as Asian American performers, you have to think about your message. You don’t want to be too preachy, but it is important to us that we do have a fan base that is Asian and understands where we're coming from, so it's not like we’re missing the mark and people are just laughing at us.

If you could do a musical collaboration with anyone?

HKF: I would like to resurrect Gary Coleman and have him spit fire over one of our deep-fried beats. If there’s one person who was angrier than us, it was Gary Coleman. He terrified me.

DLM: Patrick Stewart. He could play the flute.

The Notorious MSG will play a show at Southpaw in Brooklyn on 9/17. Download the new album Heavy Ghetto here, and read the Hyphen album review here. Keep your eye out for a full-length music video of the track “Red Tonight” in the coming months. 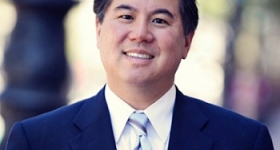