You guys? Last week was intense. We have A LOT to go through, so let's stop wasting time, shall we?

Our comedies are back! There's Community with Chang and Abed, the former living in the air vents of the school. Because ... of course he is. Tom Haverford is still kickin' it with Entertainment 720 on Parks and Recreation, though I don't think I'm alone in hoping he returns to Pawnee government soon. And of course there's Kelly on The Office, who has (so far) not seen any time behind the desk that Michael Scott once sat at. Will she get a turn as management? I know that this is where many of our readers would like to see Ken Jeong for real.

Can't mention comedy without bringing up the Emmy-sweeping Modern Family, which returned with a new, grown-up Lily (miss you, baby Lily). I begrudgingly admit that older Lily is pretty adorable, even as she claims to want to kill the new baby that her dads are planning on adopting. Also pretty great to hear about the actress's "regular" life on her mom Amy Anderson's blog right here. FINE, I admit that she's pretty freaking adorable. Loved the baby actors though.

Glee also returned, and we got just a glimpse of senior Mike Chang (his mom hasn't decided whether he'll be going to Harvard or Stanford next year) and Tina, who's still a junior. Phew, we've still got her for another year. Joining Glee in the teen comedy zone is summer show Awkward. (period intentional), which I only recently got a chance to catch up on. It's a pretty smart take on the teenage outsider story we've all seen a million times before, and on it the lovely Jessica Lu plays Ming, main character Jenna's pal. She's not in every episode, but when she is she drops lines like last week's "Chinese people can't digest cheese and chocolate, and the only thing we're neutral on is child labor" like it ain't no thang. The first season wraps up this week, but it's been renewed for a second, and you can catch all the episodes online. Check it out! You all know I was on top of what's new on the competition reality front, too. The highly anticipated X Factor premiered over the course of four hours (phew), and we saw adorable 14-year-old Ellona Santiago make it through after a great audition (and an adorable family backstage). We also saw bag of sass "Xander Alexander" show the judges lip, claim that he's better than Bruno Mars (and shares the recording artist's black and Filipino heritage), and then break down in tears when the judges deemed him too unlikeable. This despite the fact that Simon called him "lippy, gobby [is this a crazy British-ism I'm unfamiliar with?], but interesting" and chastised Xander for blowing his audition. If you're gonna have attitude, kids, make sure that you have some major talent and maintain audience relatability to pull it all off. Xander realizes that acting like a jerk isn't getting him far, for some reason.

The competition whose return I'm most excited about was The Sing-Off, a show I discovered last year and immediately fell for. This year the show is running for a full season, which means there are way more groups and way more chances for me to miss talented Asian American singers (please help me if I miss anyone!). Kinfolk 9 from Los Angeles features founder Jenilee Reyes and Antoinette Taus. See the group's first performance here. The University of Rochester YellowJackets include Abhishek Sharma, and the Dartmouth Aires (What what! My alma mater, you guys!) have Preston Suan. Looking forward to instrument-free entertainment from all of these guys this fall. And of course we have our regular shows. After several weeks on shaky ground, Olivier was eliminated from Project Runway for a truly out-there outfit for the lead singer of The Sheepdogs. As he did last week, Olivier's work time was peppered with complaints about the poor guy's "plus" size. Might have to deal with regularly sized people at some point in your career, dude. Anya, meanwhile, came very close to being eliminated herself with her worst garment by a long shot. As Michael Kors said, "This week we got to see that you've only been sewing for four months." Eek, hang in there, Anya! I mean, c'mon Olivier...your palette just doesn't work on everyone.

More bad news on Top Model All-Stars: after failing to embody her assigned word "unexpected" during a hot dog photo shoot (don't ask my why or how she was supposed to do that), Sheena was sent home after just two challenges. It's okay, girl. You don't need Tyra to be fab. We loved seeing you again, Sheena! Love the dress, but I have to admit that the shot is a bit blah

Sally is still struggling on Top Chef Just Desserts, creating a water park treat that Johnny didn't find "that special." Luckily, she had immunity from her Quickfire win, but dang, I'm worried about whether the elimination challenge upswing we were hoping for from Sally is ever coming. C'mon, Sal! On Survivor, we still haven't seen much from Elyse beyond another request for aid from her Native American ancestors, but Edna is starting to make a play for alliance safety. She had a heart to heart with Coach, but she's not in his five-person inner circle. And this after she was the only one to be nice to him after the very first challenge! Dude. Later Edna proved herself to be a pretty bad liar when she flubbed a fake-out while talking to a potential eliminee, and throughout the episode she sported a bizarre visor-ish construction. Okay the distrust reasoning is starting to make a little more sense. Sorry, Eds. I'm torn between finding the visor clever and terrifying 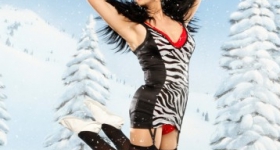