It’s spring in the nation’s capital, and that means cherry blossoms in all their glory, and the requisite ooh-ing and ahh-ing. In spite of the early peak season, DC is still celebrating the 100th anniversary of the National Cherry Blossom Festival, with five weeks of performances and other events. It’s amazing to think that the cherry trees gifted to DC from Tokyo in 1912 as a symbol of friendship are still alive and blooming today. (I'm serious. The average lifespan of a cherry tree is only 15-20 years, but these have somehow made it to the 100-year mark. It's mind-blowing.)

Friendship between DC and Tokyo is, of course, a wonderful thing. And who doesn’t like cherry blossoms? I was lucky enough to score a press ticket to the Opening Ceremony of the National Cherry Blossom Festival on March 25. Between performances by the TAIKOPROJECT and pop stars MISIA and Sara Bareilles, speeches were given by both American and Japanese officials involved with the Festival -- including Ambassador of Japan Ichiro Fujisaki and DC Mayor Vincent Gray. Everyone spoke highly of the other’s country and the deep friendship they shared as symbolized by the historic cherry trees.

The words were all lovely, but I couldn’t help but feel uncomfortable about the lack of acknowledgement of a certain little skirmish that had a profound impact on the relationship between the United States and Japan. You know...World War II.

Current foreign relations between Japan and the US might be generally cooperative, but the reality is that the US once treated persons of Japanese heritage with the highest suspicion and eventual removal of rights. I’m no historian, but it is an interesting timeline to ponder:

In 1912, Tokyo gifted DC with 3,000 cherry trees. Two years later, the world was at war. The US and Japan fought on the same side. In September 1939, World War II broke out, but leery from WWI, the US benched itself. Then, on December 7, 1941, Japan attacked Pearl Harbor, after which the US entered into war. President Roosevelt issued Executive Order 9066 in February 1942, and the internment of Japanese Americans began. By the end of 1942, most of them no longer owned homes, businesses, or were afforded the same rights as other Americans.

The airbrushing of history between Japan and the US could be interpreted as irresponsible on the part of festival organizers. True, festivals are supposed to be a jolly affair. But if the main intent of the centennial is to celebrate the relationship between the US and Japan, then we cannot ignore a time when that relationship directly resulted in suffering and injustice to American citizens of Japanese heritage. We can’t be afraid to face our own history for the sake of having a good time.

For me, one of the most poignant images of this dark period is of a Japanese American man entering a detention center in Santa Anita, California. He is dressed in the uniform of a World War I veteran. 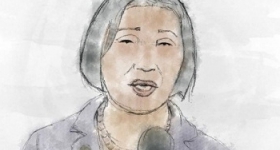 Mia wrote on Wed, 04/11/2012 - 1:58pm
Thank you for this thoughtful article. Since the title mentions "US-Japan" relations, though, I was surprised that it focused on the internment which, though involving Americans of Japanese ancestry, is basically a domestic issue of Americans wrongfully perceiving other Americans as foreign and threatening. The relationship between the US and Japan has other complicated and dark points as well, like Pearl Harbor, Hiroshima and Nagasaki, the American Occupation of Japan, and the strange military relationship between our two countries that continues to this day. I appreciate the article you've written, but I think that if we're going to reflect on US-Japan relations, we should think beyond our own country's borders as well.