Actor Justin Lee, best known for his role as Annyong Bluth on Arrested Development, talks to Hyphen about growing up, launching the web series One Warm Night, and super powers.

So you’re a Korean American from L.A. How did growing up there shape your career path and aspirations?

I was born in L.A., but my family moved to Mission View, CA, when I was four years old, and then we moved to Fullerton when I was 16. Since I was a little kid, I was heavily influenced by TV. I remember saying I wanted to be an astronaut, a doctor -- basically whatever I saw people do on TV. And then I thought, “Hey, if I was an actor, then I can be them all.” My parents were always deeply supportive. I did lots of extracurriculars, like sports, acting, musical instruments. But nothing compared to my passion for acting.

I saw that you’re currently at Fullerton College. What are you studying there?

At Fullerton, I have over 90 credits in film and social sciences. But working with Steven Lowe has been the real eye-opener. Steven is my manager, mentor, and acting coach at the Actor’s Room, director of Last Chance Productions. It goes to show that a film degree doesn’t mean much at all. I mean, I’ve been in the entertainment industry for 11 years. I see kids who are used to being directed, and it becomes like us teaching them how to do their job. I’m a firm believer that practical hands-on experience is so much better than reading out of a book. I mean, I appreciate education, but I think I’ve gotten everything from school and now I’m applying it in real life.

Recently, I started a film production company called Black Canvas with my good friend Ryan Tsang. With Black Canvas, I hope to write, direct, and produce blockbuster films. I want to integrate my passion for acting, sports, and telling a story.

I also have a happiness contract with myself. At the end of every week, I evaluate the x number of hours I spent on school, x number spent on doing my dream. Am I happy doing what I’m doing? I think it’s healthy to think about that.

Right now, I’m working 80-120 hours a week. I wouldn’t have this drive for school, but this is something I love, not only for myself but my culture. There seems to be an Iron Curtain for Asian Americans. I plan to go back to school for an entertainment and sports law degree. That would be really helpful because then I can deal with my own contracts. I want to be able to control and manage my own career.

What are some challenges you’ve encountered through this whole process?

I’ll never forget the audition process for Arrested Development. I went and auditioned for it, and I got called back that same day. It was a really big deal for me because the role was for an 18-year-old but I was only 14 years old and probably looked like I was 10 or 11. It was absolutely amazing to be part of a show of that caliber. Those actors were amazing to work with, and there was not a moment where I felt out of place. It really gave me the drive to perfect my craft, to get to a point of showcasing my skills in lead roles.

Okay, so I saw the trailer for One Warm Night. Can you tell me more about it?

Sure. It’s an original 9-episodic web series. We’re on Facebook, we’re on Tumblr, we’ve got a Twitter. And we got a rave review from Snobby Robot! [laughs] Right? So to give a little background about the series: It’s produced by Last Chance Productions and written and directed by Steven G. Lowe. Steve put in his own money out of his pocket and created this to give us all equal face time. It was one of the most amazing experiences, to see this production from the development process to post-production. It’s just one thing led to another, and this little project turned into a film.

So what are three roles you’d love to play?

[laughs] I actually just wrote a screenplay with Ryan called The Comeback Kid with a character who is a student-athlete. It’s like 21 meets Pineapple Express meets Never Back Down. I’m real big on sports, not so much stereotypical martial arts, like “Oh that kid is Asian, he must know martial arts.” But then, Rocky is probably my favorite movie of all time.

And lastly, to be a superhero. I’m drawn to messy roles, roles where the hero has to try to find himself, decide whether or not to use his powers for good. Most of the roles I’ve come out on are comedy, but I would like to showcase all my skills, show a more introspective side of my acting. I’ve always wanted to do my own stunts. I have this big, big passion for martial arts. But again, not stereotypical cheesy Asian martial arts. Something with a high-concept structure.

It’s funny you talk about want to do superhero roles, because my last question for you is “If you had a superpower, what would it be and why?”

No way! Really? I always think about this, but I always change my mind. Flying would be awesome, but I don’t want to be a copycat -- I always want to be original, you know? Okay, how about this, I’m going to go a little political here and cheat around the question. Here’s a power I really like: Magneto in X-Men. It’s one of the most powerful and practical superpowers in the world. You can fly, you know, just put something metal under you and levitate. You get the whole shebang, get all the perks. It’s a really awesome superpower.

Now I have a question for you: what would your superpower be and why?

Yeah. What superpower would you want to have?

You know, I don’t think I’ve ever had anyone turn the table on me before.

Well, okay,  I think I’d like to apparate, you know. Teleport. I really hate driving, so it’d be really awesome to just be able to teleport places.

Apparate, yeah, that’d be so awesome. It’d save so much time!

'One Warm Night' is slated to launch at the end of June. Intrigued? Check it out on YouTube. 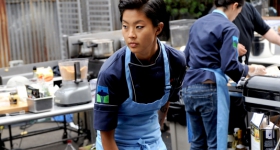 Dakota wrote on Fri, 05/11/2012 - 4:06pm
You need to remove the period at the end of the link. Currently it goes here: http://www.youtube.com/user/OneWarmNight. it should go here: http://www.youtube.com/user/OneWarmNight Great article, so excited to see the show!!!
Elleen wrote on Fri, 06/01/2012 - 11:39am
I love how you interview the up and coming asian americans!! It's fantastic. and i love the end of the interview.