A few weeks ago, a scandal erupted on the web thanks to an unfortunate misquote regarding Manny Pacquiao's stance on gay marriage, made in response to President Obama's public extension of support for it. Essentially, Manny Pacquiao tells a reporter, "God's words first." The reporter then quotes Leviticus 20:13; an L.A. Weekly blog post quotes that piece and uses the headline "Manny Pacquiao Says Gay Men Should Be Put To Death"; and the misquoted story goes viral. About a day later, the whole thing had been researched and debunked. As it turns out, although Pacquiao's still against gay marriage, he said nothing about wanting gay people dead -- but the damage was done. His image was already tarnished, my conservative family members were already blabbering on about the biased liberal media, and Floyd Mayweather Jr. had already jumped on the opportunity to support gay marriage publicly.

It's hard to keep track of the layers of f*ckery in this story. There are so many questions we could (and should) ask: Would this issue have gone viral and would Pacquiao have been misquoted in the first place if he were white and American instead of brown and foreign? Could our leap to conclusions have hurt the gay community in the eyes of people who don't yet consider themselves allies? Did nobody realize that Floyd Mayweather Jr.'s coming out in support of gay marriage because it was a more popular political move was actually a pretty big deal -- given his history of homophobic rants -- even though it was clearly opportunistic on his part?

I don't think I've ever met a single Filipino American who didn't feel possessive over Pacquiao. He was sometimes like our embarassing cousin (see him singing karaoke on Jimmy Kimmel), except the entire world knew he was awesome, and it made us proud. He was charming, he was ours, he represented us. What we felt for him was a pride we hadn't felt for anything else, and in the wake of the scandal, many of us lost that feeling.

What he actually said wasn't quite as awful as what was reported, but clearly not talking about his views on gay marriage at all would've been preferable. The fact now remains that he doesn't believe in equal rights, and given how widespread the misquote was and the way he chose to control the damage, it's not something any of us can ignore anymore. We can no longer pretend this entire thing just didn't happen.

I can't say I know what it means for anyone else, but it brings to mind how exhausted I've become of making excuses for the unacceptable things that go on in my community. How old folks are racist because they're "from a different time," or how little cousin had to get married when she got knocked up because Tito and Tita are super Catholic.

The Pacquiao scandal is actually a pretty good example of what goes on in our families. He doesn't dislike gay people -- in fact, he said he had a gay relative (though that doesn't necessarily prove anything) and he most likely has some gay folks in his entourage or at the very least, in his constituency. But it is somewhere documented in some ancient book that God wouldn't approve of gay marriage or something, and therefore his faith dictates that he must be against it. God as the ultimate cop-out.

I, too, have gay family members. In particular, the smartest dude in my family is out, and he was largely embraced by my entire family. But my family has a track record of voting Republican because they're fiscally conservative. Most of them don't actually care whether gay marriage is legalized or not (though I should note that gay marriage is now legal in Connecticut and New York, where most of my family lives), but when asked the "What about gay marriage?" question during election season, many of them will dodge it.

Gay marriage is quickly becoming an issue that can put you on the wrong side of history. President Obama's public support of gay marrage has rightly been considered both a huge deal and something we somehow should've been over three presidents ago. The NAACP then went on to support the Prez and endorse gay marriage as well. Hell, even Jay-Z spoke out in support of gay marriage, evolving from his homophobic lyrics of yore.

Gay rights' activists have been working hard to turn the tide, and there has been a huge amount of progress in public opinion over the course of just a few years. While there's still a long way to go, there may be hope for our socially conservative fam yet. We just might change your mind, Manny. 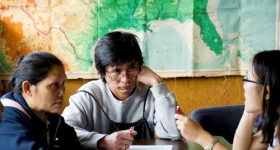 LTE wrote on Wed, 05/30/2012 - 11:10am
"but when asked the "What about gay marriage?" question during election season, many of them will dodge it." . I think some people support gay marriage because they do not want to put up with the petulant behavior they have to endure by disagreeing with it.
Anonymous wrote on Thu, 05/31/2012 - 12:12am
There is no discrimination when it comes to marriage here in d U.S. All gays, lesbians and straights can marry d opposite sex and all can not marry d same sex. U talk about "equal rights", but u don't know equal rights, Manny Pacquiao does. Obama along with lesbians and gays r trying to destroy that "equal right."